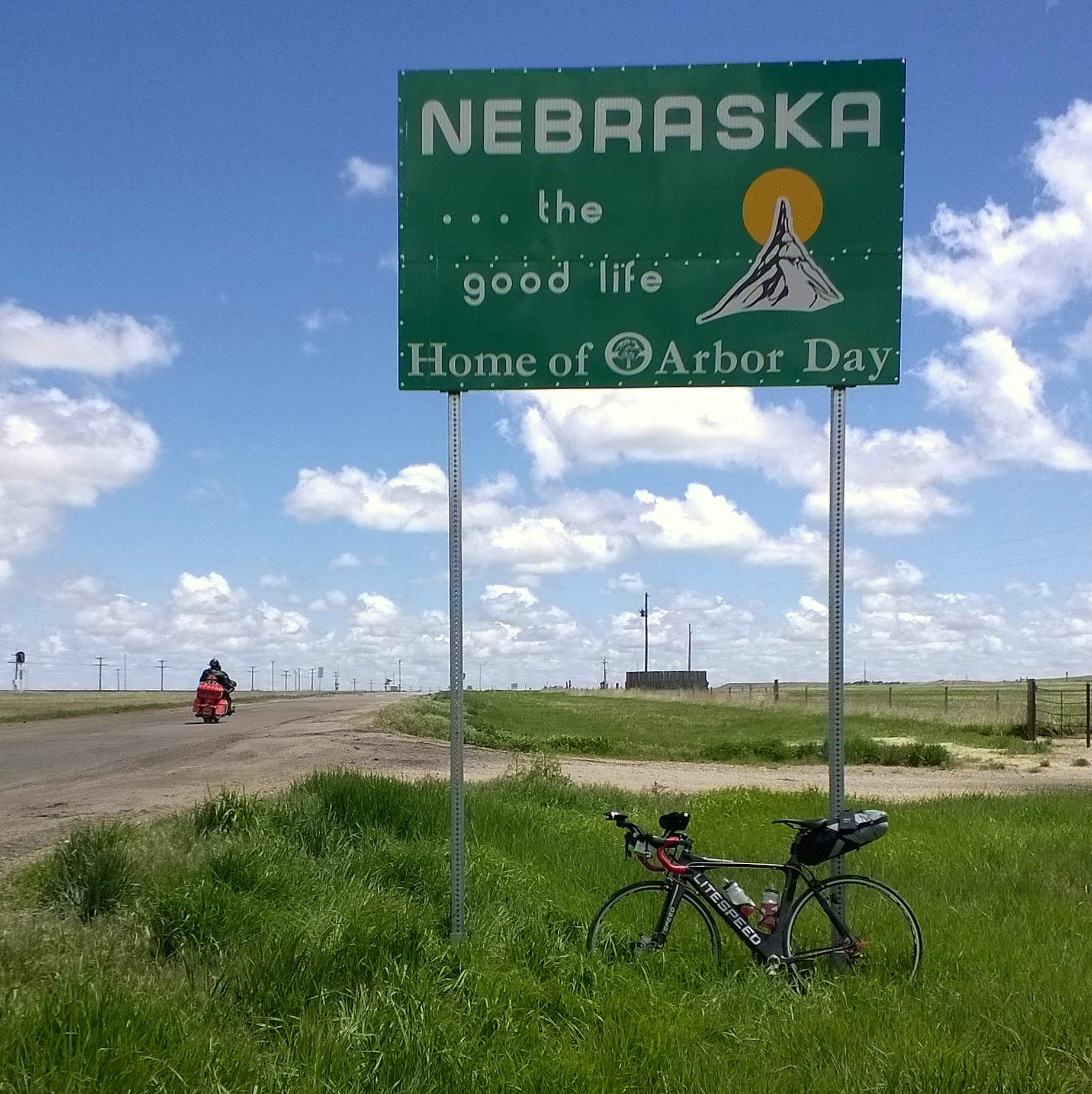 This Sunday ride served as a final body tune-up and gear shake-down for the Trans Am Bike Race. And also an opportunity to ride into Nebraska. Finally. Let me explain.

Back in October 2008 at the Jorge Torres presentation at Runners Roost Fort Collins, Mike Hinterberg told me that he determined that the Nebraska border was exactly 100 miles from Fort Collins and it could be a good landmark to bike to. Google Maps proved he was right and a few days later, I set off on my own Fort Collins-Nebraska 200 self-supported ride. However, as it was October with increasingly limited daylight hours, I only made it to within a few miles of the state border. I was content to merely “see” Nebraska and turned around so as to ride less miles in the dark on Highway 14, a busy highway laden with semi-trailers going 65 miles per hour and lots of rumble strips.

That turned out to be a good call especially when you consider I ended up getting a flat tire on Highway 14. But I never officially made it to Nebraska.

Fast forward seven years, and this relatively flat ride with limited turns made for an appealing double century training ride. This this time I was determined to actually make it to the border.

I ended up doing so, stopping only once on the way out at a gas station in Burns, Wyoming for food. I stopped a second and final time at the same location on the way back for the same reason.

Despite Denver and some parts of Weld County getting dumped on by water falling out of the sky, I managed to stay perfectly dry. The winds were only moderate and the temperature near perfect.

The ride was pleasant and a successful test of an Oveja Negra GearJammer Seat Bag containing a Mountain Hardware Phantom 32 down sleeping bag and Outdoor Research Helium bivy, along with a snack box I made from an empty Spam can. I had zip-tied the can to the aerobars and it proved to be a vastly superior snack box than the Bento Box I used in the Rawhide Ramble 200km Brevet, or plastic zip-lock sandwich bag I taped onto the handlebar stem in the Rustic 400km Brevet.

The only potential downer was a squishy rear tire about eight miles from the finish around the same location where I got a flat seven years ago. However, as wherever there was a puncture was sealed by the Stan’s NoTubes sealant in the tubeless tire, I only had to inject more air into the tire instead of doing a full repair. This got me home and I was going to swap out the tires for brand new Hutchinson Intensive 700x25c tubeless tires anyhow for the Trans Am Bike Race.

I got home well before sunset and had enough time to shower and join some friends for a going away get-together for our friend Ellen. Not only was the ride a perfect length but I had finally ridden to the precipice of Colorado’s adjoining northeastern state as well.