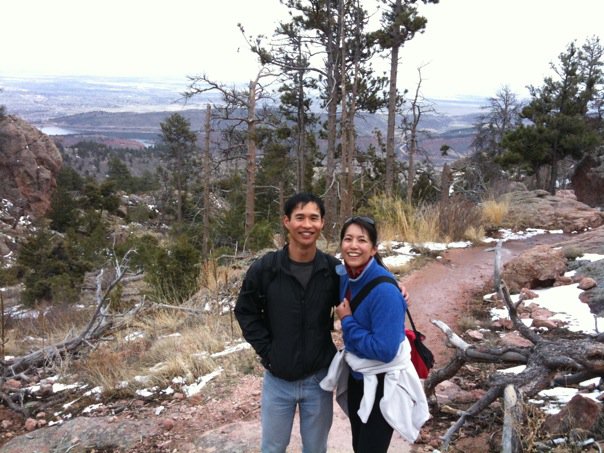 “I’m anticipating that spending a day with Felix will be more exhausting than spending five days with six kids,” Alyssa posted on her Facebook status.

At least she can’t say I didn’t warn her. I told her that we were going to hike, climb, do yoga, and run all within the 22 hours she had to visit (which included sleeping). I figured I was doing her a favor. She mentioned that since she and Bryan arrived in Colorado, they’ve been eating pizza, greasy Chinese food and lots of desserts, and she decided that “once we’re done visiting with our friends here, I’m not eating anything until I get back.” Surely doing so much exercise in a day’s time would allow her to eat again at least before she entered Nevada on her way back to California.

It turned out I didn’t really need to coax her into being an over-exercising maniac with me. Within twenty minutes of arriving at my home, she was already doing some “unconventional” pull-ups.

Then, the three of us lunched at Tasty Harmony before driving over to Horsetooth Mountain Park where we hiked up to Horsetooth Rock, an icon of Fort Collins. The trail was a little wet and sloppy from last night’s minor snowstorm, but the views were gorgeous with enough photo-taking moments to excite Amsel Adams.

Next on the agenda was scampering up plastic climbing holds at Miramont Lifestyle Fitness. The last couple years Alyssa has had a habit of one-upping me on the climbing wall, but today we had time for only four climbs including one 5.11. Good thing because if we had time to do much more than that, she would have chicked me on my home turf.

After a quick bread-and-salad dinner with Tori, we (sans Bryan, who decided coffee sounded like a better idea) headed over to Yoga for Climbers. Here Alyssa was clearly enjoying herself and kept anticipating Sammy the Instructor’s moves despite never having done this class before. I, on the other hand, was ready to throw in the towel after the shoulder-stand attempts and multiple runner’s lunges.

The next morning Alyssa and I ran my favorite neighborhood loop, trotting by the ponds of Hearthfire and rural horseland and then on a dirt trail bisecting Richards Lake and the Fort Collins Country Club. It was a day as clear as Saran Wrap with great views of the mountains. It would be my last run before the Davy Crockett Bear Chase marathon.

Amazingly, it did not seem like I was able to break Alyssa despite the constant activity. In fact, she’d later post, “Had a blast with my latest endurance challenge: 22 hours of Felix – hike, climb, yoga, run. Next time [he’d] have to try harder to break us. Maybe if we start with the brewery circuit first…”

Yes, start with the brewery loop first, that will render me completely useless and dude-able. :) Thanks for entertaining us, Felix! We had a great time, and you were a gracious host and a wonderful tour guide. Maybe next time I'll have some new tricks for you, ha ha. ↩ Reply