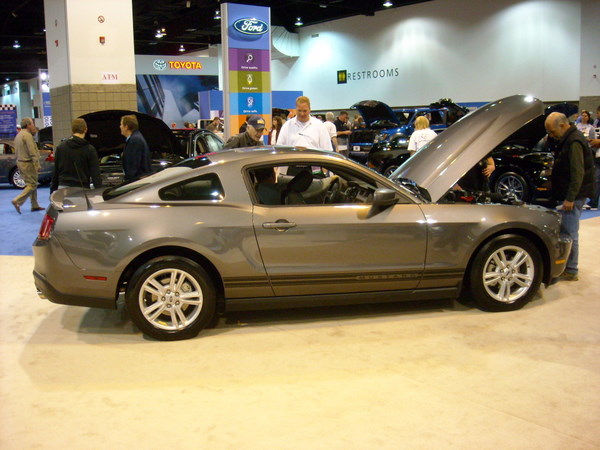 Walking around the second floor of the Denver Convention Center, the Denver International Auto Show just felt different than it did in years past. Then it hit me—it was because GM’s floorspace was so small as a direct result of The General shuttering Pontiac, Saturn, and Hummer during the last year. While I certainly shed no tears over the loss of the Humvee, I did feel a tinge of sadness that two of my perennial sports car favorites—the Pontiac Solstice and Saturn Sky—were nowhere to be found.

That said, there were several bright spots among the American Manufacturers’ displays.

For me, Buick was the biggest surprise. The Buick Enclave, Lacrosse and Regal are now all world class and very elegantly styled, appearing like they were sculpted from solid blocks of steel. On their insides, their style and extensive use of chrome and high quality materials make the interiors of Lexuses look absolutely staid and unimaginative. The interiors of the new Buicks, in my opinion, are nicer than those of Cadillacs. Buick is back!

Ford also is producing very competitive cars with high-quality materials and class-leading fuel economy. The new Ford Taurus is elegantly designed both inside and out, and the Ford Fusion has been getting awards like Motor Trend’s Car of the Year. The 2011 Ford Mustang V6—in response to the Chevy Camaro V6 with an already amazing 300+ horsepower and 29 mpg highway—is the first car ever produced with 300+ horsepower (more than the 5.0 GT from a decade ago!) and 31 mpg highway with the automatic.

On the foreign front, I was especially impressed by Mazda. The new Mazda 3, 6, CX-7 and CX-9 look fantastic with plenty of the company’s “zoom zoom” philosophy infused in the vehicles’ styling. Interior materials, fit and design are top notch for their price range. Now if only Mazda would give the MX-5 Miata’s interior—which looks rather dated compared to, say, the 3—a makeover.

Audi is famous for having the best interiors, but compared to the designs coming out of Detroit (like Buick’s) or even my first generation TT, Audi’s interiors are starting to look rather conservative and uninspired. The same goes for its parent company, Volkswagen.

One of the biggest design trends are fancy exhaust tips. High end vehicles always had dual chrome exhaust tips as large as beer cans protruding out of cutouts in the rear bumpers, but today even low- to mid-range vehicles like Suzukis, Mazdas, and Buicks have exhaust ports shaped like trapezoids.

Unfortunately there were virtually no concept cars or vehicles I hadn’t seen in person before except for the Corvette Stingray concept, which looked awesome. I hope GM builds it. It even makes the new Camaro look pale. The existing Corvette is getting a bit long on tooth (especially its cheap-looking interior) so the next generation can’t come too soon.