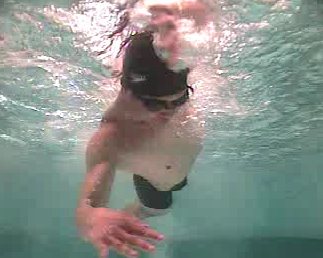 I guess I must have recovered from the hypothermic trauma of last-year’s Horsetooth One-Mile Open Water Swim, because recently I’ve been thinking about how I can transform from an amoeba to a catfish. To that end, I thought it would be a good idea to get a video analysis of What I Am Doing Wrong, because in past years reading Total Immersion books and doing their drills haven’t been able to prevent me from emerging from the waters as one of the last. Call me a visual person, but I tend to learn best by seeing instead of feeling or listening.

Enter Swim Labs of Highlands Ranch, Colorado. This organization has an Endless Pool with underwater and overhead cameras to film your stroke. I signed up for a $65 one-on-one session with a coach named Giff, and within the half-hour I was allotted, Giff was able to point out and correct several things I was doing wrong.

Giff also noted that when I am swimming, I almost look like a kung fu fighter. He wanted me to swim smoother with less effort and less shoulder rotation.

After noting each of my problems, Giff would say “do this instead” and let me try for 30 seconds or so. There was a lot to remember and at the end of the session Giff admitted that he was initially afraid it would be difficult to undo all the Total Immersion “damage” in my stroke, but that it turned out I was a quick study.

Indeed, as the swim session progressed and he had me correct more and more issues, he kept having to turn up the speed of the Endless Pool as I was getting so much faster. So there is hope!

Now I just need to keep on practicing everything I learned so it becomes ingrained. Hello catfish, here I come.