Lately I’ve been amazed at the leaps and bounds automotive manufacturers have been making the last few years in regards to fuel economy, at least in relation to engine power. A few examples? A 2010 Chevrolet Camaro V6 rated with 305 horsepower and 29 miles per gallon (highway), and a 2011 Ford Mustang V6 also with 305 horses, but 31 mpg highway. These are just the base models with automatics, and yet their straight-line performance would put just about any Ferrari from the 80s or 90s to shame—all while sucking half as much fuel.

In light of this, I’ve been reassessing just how efficient my 2001 Audi TT Roadster Quattro really is. Once considered state of the art, the 1.8-liter turbocharged engine puts out just 225 hp—a pretty amazing 125 hp/liter, but just two-thirds the power output of the new pony cars’ larger-displacement base engines. And an EPA rating of 26 mpg highway. Not so impressive.

However, it seems like with any manual-transmissioned car, I can easily beat the EPA numbers. My TT does have a stick, so I wondered just what gas mileage I could get if I “tried.”

I already reported a couple years ago that I got as much as 33-34 mpg on canyon-carving highways, but nowadays I hardly leave the city of Fort Collins and have been primarily rolling on city pavement. Normally I get 25.5-28.0 when driving 80-100% of the time in the city, depending on the time of year. (In the winter, I achieve the lower part of that range.) This is according to my own calculations—the car’s trip computer usually (incorrectly) computes about 3-6% more.

Over the last couple weeks, however, in 74.7 miles of 100% city driving, I managed to get this according to the trip computer: 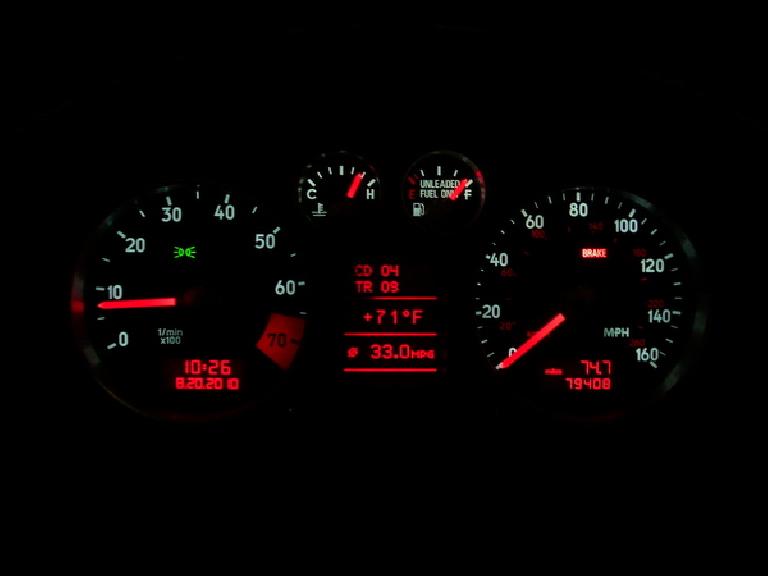 Again, the trip computer is usually a little optimistic, but even slicing 6% off its calculation, the car was getting 31.0 mpg city. That is 72% better than the EPA rating of 18 mpg city!

How did I do this? No, not by resorting to extreme hypermiling antics like squealing “death turns” or abnormal snail-like straight-line speeds that spur even grandmothers behind to lay on their horns. All it took was a little bit of care, including:

I could probably eek out a little more mpg if I was more conscious about avoiding stop-and-go roads like College Ave. through downtown Fort Collins, and not use the air conditioning at all. (In this test, I did use the A/C for about 10 of the 75 miles so as to not sacrifice comfort.) Or resort to those squealing “death turns” where I hardly slow down for a corner to preserve momentum. Nah…


Leave a Reply to The Nik Cancel reply