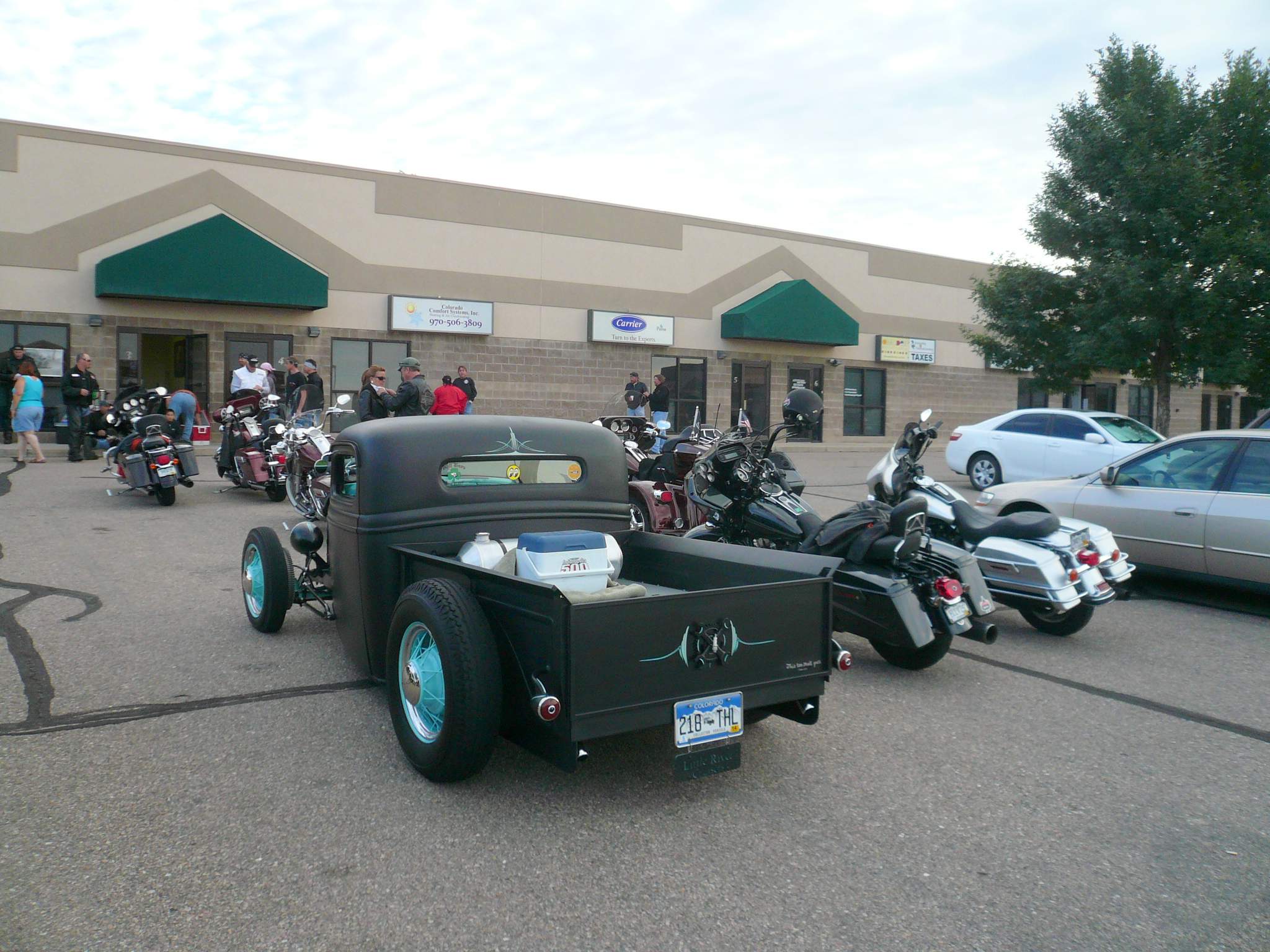 It’s been a really long time since I have done any sort of organized motorized tour. Chock it up to other priorities or not wanting to needlessly spew any more pollutants in the air than I have to, but I just don’t do these type of things anymore. At least not since I’ve moved from California and the Great American Road Trip. And certainly not since I sold the MG.

But this was a charity event for suicide prevention and support. Plus, there was a barbecue and car show at the end. So I donned my helmet at six o’clock in the morning and sped down empty highway to Evans, Colorado, with exhaust note burbling behind. Not in a classic car but on the Buell. This would be my first-ever organized motorcycle tour.

This was the schedule of events:

I was one of the last participants to make it to the start, but still had plenty of time to mingle and admire the other machines. There were 18 motorcycles—mostly Harleys but also a couple Kawasaki Vulcan cruisers and an 80s Kawasaki cafe racer. There was also a matte-black, hot-rodded 1935 Ford truck that took up the rear.

The tour went through Loveland to Estes Park, up Highway 7 and 72 (the Peak-to-Peak highway), to Nederland, Boulder, and ending in Greeley. In total, we covered 155 miles. Until we went to Boulder Falls for nice photo opportunities, the ride was almost the same as the Peak-to-Peak 300km Brevet a couple weeks ago in reverse—except the brevet was longer and the engine in that ride was me.

But I was content to let the Harley-Davidson single of the Buell power me along today. Despite having half the cylinders and displacement of virtually all other bikes in the tour, I was pleased that I was usually able to keep up with the others even when they were fully twisting open the throttle (often with ear-splitting effect). Part of the reason for that was that the Buell and me weighed a total of only 500 pounds, or several hundred pounds less than the other rider plus cruiser combinations. Some of the cruisers had two people sitting on them along with luggage, and most Harley guys are big dudes.

Another benefit of light weight and low displacement: in Boulder when I topped off the gas tank, I calculated that the Buell was getting 70.0 miles per gallon, or exactly what the EPA predicted for this bike for highway riding. Not bad for riding through hills with lots of corners and full-throttle accelerations. Hooray for efficiency.

The car show afterward was a little disappointing (only 12 cars), but at least there was an endless supply of hot dogs and hamburgers while a mix of Mexican, country, and rock piped through the stage’s loudspeakers. A Christian band also came to perform live but I left before that. The scenic motorcycle tour for a good cause was enough.