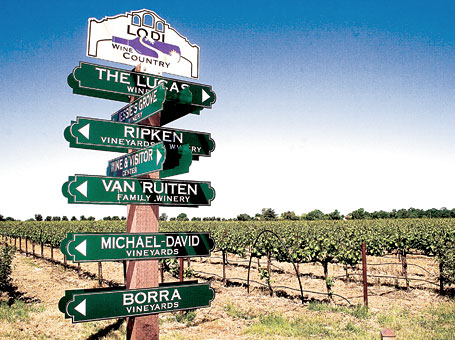 Lodi, California always seems to get a bad rap. First there was that awfully good song by Creedence Clearwater Revival in 1969 named after that town (lyrics below) that talked about being “stuck in Lodi” before the rock group gained its fame and fortune. And now Lodi usually gets clumped together with neighboring Stockton in various lists, such as the #2 worst place to live.

But during my brief visit to the area last week for a friend’s wedding reception, I was reminded of how Lodi actually doesn’t deserve so much verbal diarrhea. Sure, it has no mountains, institutes of higher education or nightlife to speak of, and while I wouldn’t rank it as one of the top 100 places to live in the U.S., it certainly doesn’t merit the notoriety of Stockton. In fact, I am here to tell you that Lodi is pretty cool—at least by the standards of the Californian Central Valley.

Some of the criminal elements from Stockton spill over into Lodi, as I was reminded of many years ago while biking in the Lodi Sunrise Century and passed several abandoned, torched cars on cinder blocks in the countryside. But for the most part, in Lodi one doesn’t get the feeling he or she is about to be robbed, raped or shot any time soon or that the next house you walk by is a possible meth lab. Its crime index was 363 in 2008, in contrast to Stockton’s 768 (higher means more crime; U.S. average = 319). In other words, Lodi is a far cry from being the second most dangerous city in California.

I went to elementary and middle school and Lodi, and in the late 1980s had to walk from the middle school to a high school to take a math class. Nothing bad ever happened to me walking the one mile between the two public schools, and the stroll—which went by cute little shops and eateries such as the Velvet Creamery (which still exists!)—was actually quite pleasant. And like back then, the town still doesn’t seem overrun with big box stores such as Walmart, Costco, Food-4-Less, WinCo’s, etc., unlike its neighbor.

For such a small town, Lodi is also surprisingly enshrined in American culture. Did you know that in addition to being the subject of the CCR song, Lodi is also the birthplace of A&W Root Beer—regarded as the first successful food franchise company and also operator of the first drive-in restaurant?

Lodi is also known as the Zinfadel Capital of the World, being home to 40+ wineries. Admittedly, the wines are typically low-end, but there are a few I wouldn’t be completely ashamed of serving up to guests.

In fact, I’m now in the mood to go out and find some Woodbridge by Mondavi for tonight’s dinner. Or maybe a frosty mug of A&W Root Beer. No, make that a root beer float.

Just don’t clump together Lodi with Stockton in your “worst cities” lists, please.

The following song was a Creedence Clearwater Revival hit in 1969. But the songwriter, John Fogerty (from Berkeley, California), admitted he had never actually visited the city and simply thought it was “the coolest sounding name.” Nevertheless, Lodi has always been known as a sleepy little farm town, so the song lyrics seemed appropriate.

The song now is used as the theme song at various Lodi events, including a past Grape Festival.

Just about a year ago
I set out on the road
Seekin’ my fame and fortune
Lookin’ for a pot of gold
Thing got bad things got worse
I guess you will know the tune
Oh ! Lord Stuck in Lodi again

Rode in on the Greyhound
I’ll be walkin’ out if I go
I was just passin’ through
Must be seven seven months or more
Ran out of time and money
Looks like they took my friends
Oh ! Lord I’m stuck in Lodi again

The man from the magazine
Said I was on my way
Somewhere I lost connections
Ran out of songs to play
I came into town, a one night stand
Looks like my plans fell through
Oh ! Lord, Stuck in Lodi again

June 29, 2011: I had a 50% off Living Social voucher for wine, so I went out and got a couple bottles of some of my favorite budget wine from Lodi: Woodbridge and Barefoot (the latter being bottled in Modesto, but made from Lodi zinfandel grapes).

Whoever wrote this is correct but Lodi is even better than what is written here. I moved there in 1989 and made a HUGE mistake and moved to Washington state and my life has been nothing but gloom. I will be "Stuck in Lodi" again as soon as I can.

Lodi is the coolest town I have known. Crime is everywhere and for all you people out there in case you are reading this Northern California is "cheaper" than living in Washington state as far as housing, gasoline, liquor, cigarettes, etc., etc. ↩ Reply

Also one of the top Skydiving centers in the US ↩ Reply

I've been there but didn't realize it was one of the top skydiving centers in the U.S.! https://felixwong.com/2005/06/skydiving-in-lodi/ ↩ Reply

From what I've been told, Lodi sells a lot of grapes to wineries in Napa/Sonoma, so I think of Lodi wines as being fine wines. The Lodi vintner's do a great job, too. It is a fact that Lodi produces more grapes than Napa and Sonoma Counties, combined. It's also true that Lodi began producing wine in the 1850s. If you're going to be stuck somewhere, I'd say that Lodi is a good place for that to happen. ↩ Reply