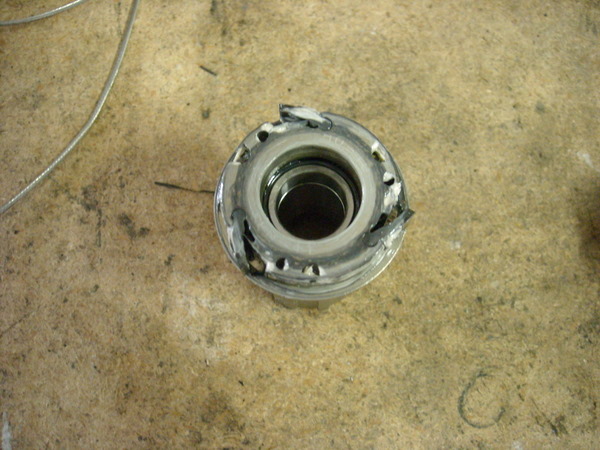 Whenever you are coasting on your bike, does your “high-quality” rear wheel sound like a naughty little kid attached playing cards to the spokes with clothespins while you weren’t looking?

Anyone who rides a bicycle with Chris King or Campagnolo hubs probably knows what I’m talking about. While not quite as loud as bikes with the former, the new Yishun 27-mm alloy rear wheel I got for the Super Bike was too loud for my liking. But not anymore. Why? No, not because I had swapped it out for another wheel or tossed it into a dumpster while exclaiming “quiet you fool!”—even though there may have been times I was tempted to.

Instead, I silenced the rear wheel in about 20 minutes in my workshop. The noise, of course, was caused by pawls clanging on engagement teeth of the freehub. So it was just a matter of quieting these pawls.

Happily, the freehub body was extremely easy to remove. The procedure was as follows:

The pawls on my Chosen hub were on the inside of the freehub body. There were three pawls.

To silence the freehub, I did the following three things:

Then I reassembled the rear hub in reverse order of the disassembly procedure described above.

In terms of reducing noise, I’d rank the above fixes in increasing order of effectiveness as follows: greasing the pawls (least effective), removing a pawl (slightly more effective), and altering the spring tension (most effective).

The cumulative result was dramatic, as you can see (hear) from this before video:

While not as quiet as the Shimano Ultegra 6500 hubs currently on my Cannondale 3.0 which are totally inaudible at speed, the Yishun rear wheel is no longer any noisier than the wheels on the rest of my bikes while coasting. I’d describe the sounds emitted from the coasting Yishun (Chosen) freehub as a low-level hum like that emitted by some outdoor power lines.

In any case, I no longer feel the need to shout “you shut up!” at the wheels whenever I coast.

I have gotten a few questions this month about whether my wheel has suffered any ill effects since implementing these modifications since a couple years ago. I am happy to report that my wheel has remained just as quiet and has performed beautifully even through epic rides such as riding 750 miles from Boston to Montreal and back in 3.4 days with 30,000 feet of climbing. Thus I consider this “fix” a total success.

I'm going to try this on my wheels with Ringle hubs. Looking forward to coasting in relative peace. ↩ Reply

Excellent review of these wheels, and useful info on toning down the noise... am going to make enquiries now. Thanks ↩ Reply

Thank you. You have given me high hopes of doing what you have done to your wheel to mine, which is coming soon from China. When I'm trying to take in a nice scenic environment, being out somewhere on some road I've never been on, or in the middle of nowhere, there's nothing I can imagine more annoying than a constant click sound. I currently have a silent Shimano hub which is a little heavy but flows like a dream. I want lighter weight, but I don't want to sacrifice smoothness and quietness. ↩ Reply

Thanks for your comment. Yep, after the fix that I described in the article and the video, the hub is still quiet (many years later) and I don't even notice it while freewheeling anymore. I think you will be happy with a similar modification. Good luck and happy cycling. ↩ Reply

Hi, I am responding to the comment you made to Felix's Wong's fix of a noisy rear hub on Nov. 2017. You said that you had a silent Shimano hub at that time. I am in the process of building a bike and want to find a silent rear hub. Would you mind giving me the model of Shimano hub that was silent? Thanks and great biking. ↩ Reply

Hi Elizabeth! Every wheelset I have had with Shimano hubs from before 2014 have been quiet. These include Shimano RX100, Ultegra, Dura-Ace, and XTR (mountain bike) from the 1990s and Shimano Ultegra from 2013. The noisiest of the ones listed have been the 2013 Shimano Ultegra, but I would still classify it as "not loud."

I haven't used anything from Shimano more recent than that, but I also haven't heard of people complaining about Shimano hubs being loud like some other brands'. ↩ Reply

Just tried these (except for the removal of a pawl, which wasn't necessary) on my elite Direto trainer's hub. Worked like a charm, I can't even hear the freehub when I stop pedaling (before I could barely hear the flywheel noise over the freehub noise).

Thanks a lot! ↩ Reply

I'm so glad you were able to quiet the freehub so much using these tips, Fj?lnir! Thanks for your comment and happy cycling! ↩ Reply

How did you 'adjust the spring tension'? ↩ Reply

The springs are simple thin pieces of metal that flex. I just used needle-nosed pliers to flatten the springs out. I simply bent them in a direction that reduced the amount of spring tension.

I think it should be intuitive when you disassemble the freehub.

Good luck and feel free to drop me a line if you are still confused about this step! ↩ Reply

Hi Felix, nice to read you post recently. As I am working to reduce the freehub noise for my new bike. I have disassemble the freehub and saw 6 pawls in it. If I remove 3 of them, will it be hard to ride the bike than before? Thank you. ↩ Reply

Hi Ivan. If you remove three of the six pawls, the bike will be no easier or harder to ride. The hub will only be quieter!

There is one piece of warning I should give you, however. After several years, any lubricant you put on the pawls will dry out. Dried grease can prevent the pawls from springing back to position. If not enough pawls are engaging, then the freewheel will not "lock" properly when pedaling forward. I.e., it would "freewheel" both forwards and backward.

I experienced the dried grease problem after six years. I had to clean out the freehub because the pawls weren't engaging due to it.

The fewer pawls you have, the greater the chance of this happening. To mitigate the risk, you can clean out the hub and regrease every couple of years. ↩ Reply