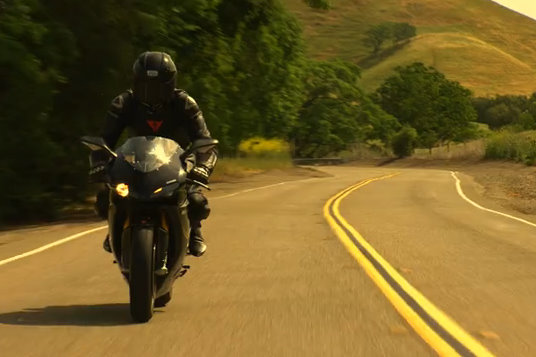 I came across the following video which captured the joy and essence of motorcycling so well that not only did it inspire me to take the Buell out for a quick evening spin on country roads “just because” (something I almost never do nowadays), but also to post it here. That it depicts a motorcyclist riding a hot Italian sport bike over roads I have bicycled and driven many times in a previous era only added to the emotion and, well, nostalgia.

This beautiful, short film entitled Escapism was created by Barry Munsterteiger and includes clips of him riding a new Ducati 1198. (The new age-ish music sounds a lot better if you wear earphones.)

He starts out in a sleeping San Francisco before dusk and heads east through the Caldecott Tunnel, past the windmills of the Altamont pass and past what I think are the wineries of Livermore, over to the Delta, and concludes on what looks to me like Calaveras/Felter Rd. east of Milpitas, California.

There are no knee dragging stunts or double-the-speed-limit felonies committed, just honest-to-goodness riding away from the confines of the concrete jungle and even other vehicles. It’s escapism at its purist in the SF Bay. Well done, Mr. Munsterteiger.

That was pretty sweet. I just got my FZR 600 running again and took it out last Sunday instead of my usually bicycling ride. I don't do it often, but riding the canyons is such a joy. Wish I had more time to do it all. I just need to figure out how to become semi-retired. :-)