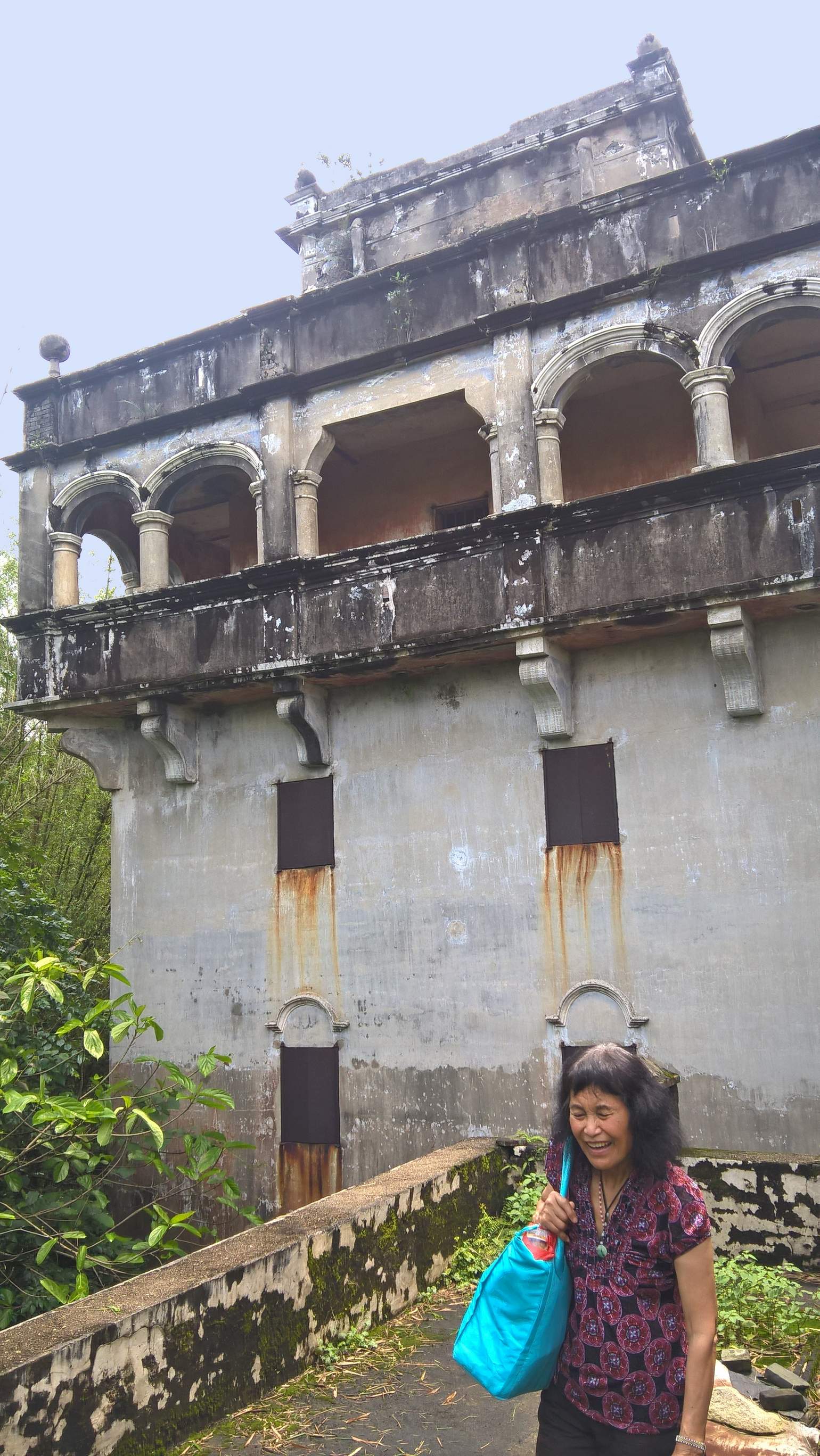 We almost did not make it here. We had some issues withdrawing cash from an ATM in Guangzhou and the small village of Chikanzhen—where my dad was born and lived until he was eight years old—was over 70 miles from where we were. My dad also murmured something about being a “country pumpkin” and he was hesitant to show my mom and I how primitive his first hometown was—or still is. Especially in comparison to the grand megacities featuring some of the tallest steel-and-glass skyscrapers in the world that he has come to love.

There was also the issue of figuring out how to get to the village. My dad had last been there in the 1940s and he had neither an address nor photograph of his residence to work off of. In the morning he came by my hotel room to work on figuring out transit directions together. Using Bing Maps, we fleshed out something of a plan: take the Line 1 metro from the Changshou Lu station to the Kengkou one, then take an express bus to Kaiping, and from there figure out a way to get to Chikanzhen (taxi or such).

From talking with folks on the bus to Kaiping in his native dialect (a dialect so different from Cantonese or Mandarin that my mom cannot understand it), my dad learned that there was a city bus that could take us to Chikanzhen. This bus made several stops along the way and traversed some pretty beat up roads alongside makeshift landfills before dropping us off at the village. My dad talked with more locals and managed to find a driver of a minivan that we could pay to go in the direction of his former home.

Then the treasure hunt began. My dad later confessed that he did not recognize anything. He remembered there was a “mountain” nearby the home, but nothing resembled such. There actually were scant homes in this area; just fields of rice and crops. My dad then mentioned his school, and although it surely no longer existed, the driver took us to the location of a school he knew of that had closed many years ago.

When we got there my dad seemed to be convinced that this was where his old school used to be. He had the driver turn around and drive a bit further southwest. And then suddenly my dad got very excited: there were two tall rooftops in the distance jutting out from the trees that he recognized. One was square roofed and the other was domed.

See the GPS data as recorded by my Microsoft Band 2. I actually started recording about a half-mile late; the start point should be where the end point is, which is the location of the Chikanzhen bus station. Where there is a lot of back-and-forth movement in the southwest region of the segment is where my dad’s old home and village is at.

Turns out the rectangular roofed five-story house was the one my dad lived in from birth to eight years old. The driver drove us in that direction and dropped us off at the front of a cluster of brick buildings before going on his merry way. We could walk back to the bus station after checking this place out.

We visited the following: the outside public areas, the five-story house, my dad’s cousin Stephen’s neighboring house, and a row of two-story homes. One of the latter also used to be owned by my dad’s family.

My dad pointed out the pond he swam in, and told a story about his cousin messing around and cutting his foot upon jumping in the water. The well that villagers used to get water from is still there but is now inoperable. There are currently a few papaya trees near the pond, but they must have been planted after my dad had left.

The first building next to the pond was what my dad called the public house. It sounded a lot like a pub where villagers would go drink, smoke and gamble, and where kids could play inside of.

The Row of Two-Story Homes

Moving beyond the pub into an alley narrow enough that my dad could touch each wall simultaneously with both hands, we passed by small two-story homes that were kind of like a 1930s’ version of today’s attached apartments. Some of them were still lived in, and as we talked, a villager (and then another one, and then another) came out to see what the commotion was all about. They were friendly and my dad introduced himself and gave them a gift (probably money).

One of these smaller two-story homes was also my dad’s family’s. But I think my dad lived primarily in the five-story house. He said one of his uncles and his wife was allowed to live in the two-story house as a special privilege for a few weeks after they got married.

We proceeded on to the five-story house which had a thick steel front door. In the early 1940s in the midst of World War II, this door had delayed Japanese soldiers from getting into the house as it repelled a grenade they threw at it. The soldiers eventually climbed onto the roof of the “cooling area”—a space between the outside wall and a brick fence that my dad’s grandfather had put a roof over so the kids could cool off there after playing—and broke into the abode through a second story window. Fortunately, my dad and his family had already escaped to his grandmother’s home five miles away while this happened.

As the door was now chained and padlocked, we could not enter the five-story house. Instead, we went into the cooling area and my dad pointed out where there was barbed wire (now cut and gone) above the brick fences. On the ground was a large rectangular concrete water container for taking bath water out of. We then went into the kitchen where there were five wood-and-straw-burning stoves, and rectangular holes in the brick walls for shooting guns out of in case of intruders.

A little later we went back out and ascended the stairs to the rooftop of the kitchen. Some plants and vines were so overgrown that they nearly impeded our way up to the rooftop, and the mosquitoes were pretty vicious here too. My dad said that this “jungle” of plants was not there in his day; instead, the space was totally open and he could see rice fields miles away.

From this rooftop we got the best view of the five-story house. Also, my dad pointed out the room in which he was born in. His family used to hang out laundry on this rooftop and sometimes he would come up here and play his harmonica.

Going back down, one of the villagers unlocked the doors to the adjacent house, which belonged to the family of his cousin Stephen (who now lives in Canada). The house is now unoccupied but was still tidy.

My dad pointed out some window bars that had been severely bent by Japanese soldiers. We took a stroll through the house before walking twenty feet over to the row of two-story homes.

One of the villagers graciously let us inside his own two-story home to show us around. This was fascinating since it suggested how my dad would be living were he still living there today.

Printed photographs adorned the villager’s walls. His home started receiving electricity in 1986; thus, he had a few functioning lights (including a fluorescent-tubed one), a ceiling fan, and even a medium-sized cathode ray tube television. He didn’t have a telephone land line, but he did have a cell phone similar to a Nokia cerca 2000.

Interestingly, this home only got running water last year! A white PVC pipe with faucet was run to the house after the whole mini-village got some sort of municipal water line in 2013.

After showing us his house, the villager opened the front doors of the two-story house that my dad’s family had owned. The room layout was the same as the villager’s but was much more unkempt. I’m not sure when it was last occupied.

This house had also been raided by Japanese soldiers during the war, and they had scraped off the gold flakes used to write characters in the traditional ancestral worship room located on the second story above the living room.

Here is a brief video of that house, including footage of my dad demonstrating a wooden machine his family used to grind rice.

After walking through that house, we mingled outside along with some handsome, gold-colored dogs. My dad said he only saw black dogs back in the day. The villager mentioned that almost every day tourists stop by this remote village as it is internationally recognized as having historic value. Kind of like the Tulou we saw in the Fujian province.

After talking for a while, one of the villagers walked with us part way towards the center of Chikanzhen. The villager pointed out rice fields and an irrigation ditch that was dug in the 1960s and widened in the 1980s. A levee was created next to it to prevent flooding.

After we parted ways with the friendly villager, my mom, dad and I walked back to the bus station alone. Occasionally, a villager whizzed by on a motorbike, something no one had when my dad lived out here. By walking back to the bus station I got an appreciation for the distance my dad had to walk (about 1.5 miles) to buy food for the family back in the day.

Seeing my father’s childhood home was really eye-opening as it showed just how far he had come. While his family was fairly well-off compared to the neighbors thanks to his grandfather going over to Canada (when Canada was letting Chinese in to work the railroads) and making enough money by running a laundromat to build the house, even by 1930s U.S. standards they were still poor. Seventy years later after he had left, my dad now lives a pretty cushy life in California as a result of working hard as a doctor for 37 years, something I’m sure he never imagined happening while living in China.

I’m glad we came and found the place, as it turned out to be the highlight of the whole China trip.

Thanks for sharing all these photos - they're awesome and so interesting. Video is cool, too. I'm glad the house wasn't torn down. ↩Reply

You're welcome, Anna! It was so neat going over there! ↩Reply