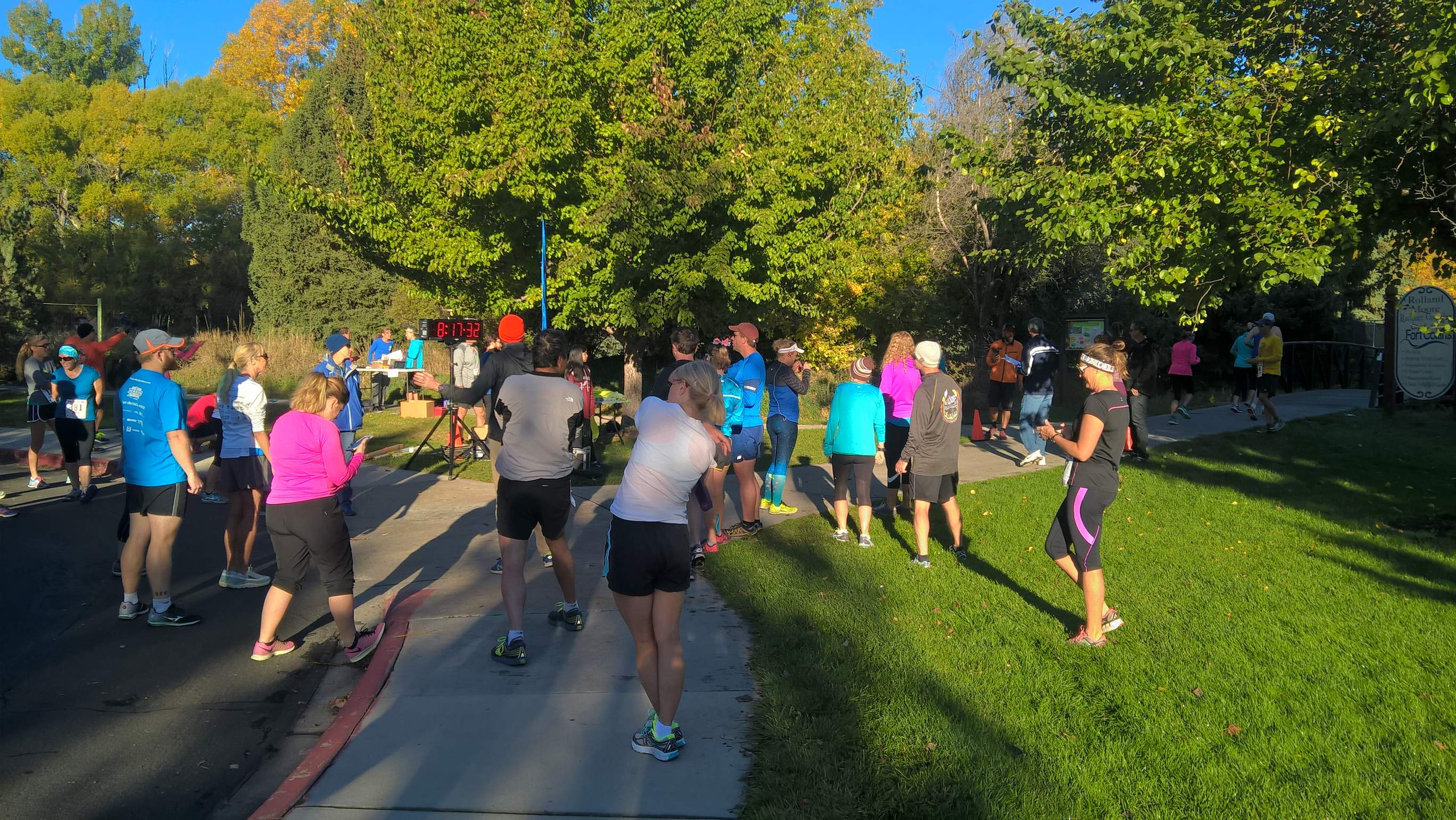 It’s been a while since I’ve done a Tortoise & Hare race with the Fort Collins Running Club, but the first one of the season is always the one I look forward to the most. Not only is the weather usually perfect for running with fall colors in abundance, but the race distance is also the shortest: only four kilometers, or two-and-a-half miles. In addition—and perhaps because of these reasons—this T&H race yields the highest turnout. There were 153 runners this time, in fact. A bit more than the 10 people that participated in the first Tortoise & Hare that I ran over 10 years ago.

Per the T&H predicted time algorithm I developed for the club over the last five years, my computer script said I would finish in 16:30 (or 6:38/mile pace), which put me in the 8:23:30 a.m. starting wave. This meant I started at the same time as my friends Alex, Dave, and Josh, whom I know from running with over the years truly do run at about the same race pace.

Unfortunately I did not give my Microsoft Band 2 enough time to lock in onto GPS (it normally does so within 15 seconds and I am not sure why it didn’t today). So I was running this race entirely off of feel with no data feedback. That’s how I prefer to run these shorter races anyhow, although having GPS data post-race sure would have been nice.

The first half of this out-and-back course on the Spring Creek Trail was a very slight downhill, and I felt very good on this section despite running conservatively enough to keep my breathing under control and comfortable. I got a gap on Alex and Dave, although Josh—whom I run with at track and know he is really fast despite having a build more typical for a wrestler—was right on my heels that entire length.

After the turnaround, however, I think he had enough of pacing off me and so he passed. I tried to stay with him even after he opened up a fifteen foot gap. Meanwhile, we were passing lots of other runners who had started before us.

I knew the course pretty well and started putting in some surges with half a mile to go. Many of the other runners offered encouragement as I passed. One or two of them even tried to match my speed as I carried on by, saying things like “I’m going to make you work for it!” and “Come on, you’re almost there, keep it up!” This kept my energy high and I really appreciated the encouragement.

The final 100 feet got pretty tight and I resorted to running on grass to get around some of the runners, but I put down the hammer as much as I could. I couldn’t quite catch Josh, but I was pleased with my effort. Especially when I saw my time: 15:56, or 6:25/mile pace. That was my second best time in this race out of seven total attempts.

I am very happy with my fitness right now. Looking forward to the next Tortoise & Hare to see if I can keep this up.