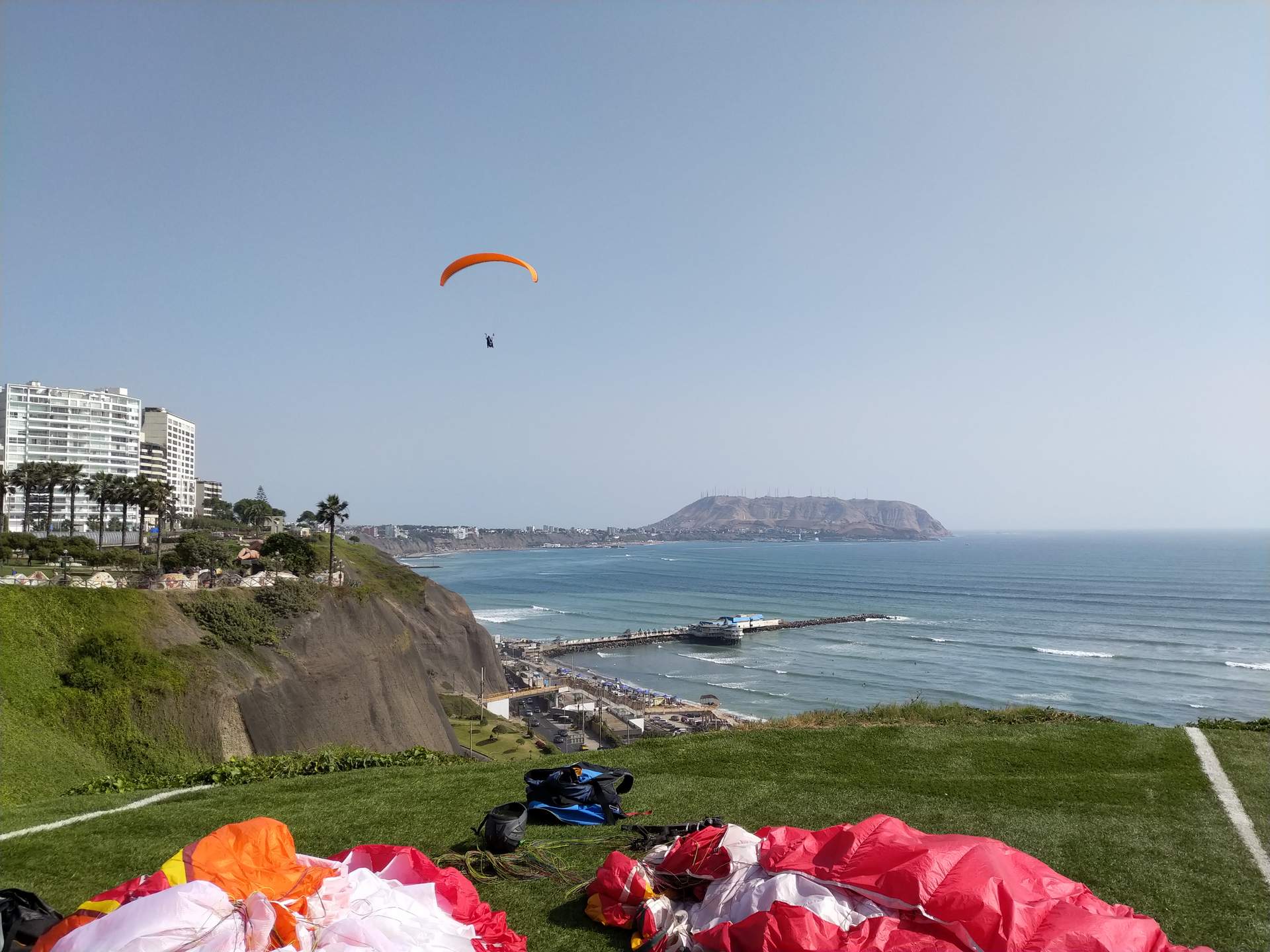 I have to admit, I was not the most enthusiastic about Matthew’s paragliding idea due to being most decidedly a land guy. Sure, I board commercial jets all the time and even went skydiving once. But the notion of paragliding prompted the type of questions an old man might ask of his niece when he learned that she goes rock climbing. Is it safe?

“Yes,” Matthew assured me, being a paragliding pilot himself. He even brought his helmet as he was really looking forward to this adventure.

He also happened to have a friend in Lima who knew, and may have worked with or for, the owners of an operation that took people paragliding over the upscale district of Miraflores. The guides launched from a flat public park covered in artificial turf that was essentially a large shelf on top of the cliff. Directly west and below the cliff was a highway. Beyond that was the bluish saltwater of the Pacific Ocean. Hopefully the guides knew what they were doing.

“You’re really lucky today,” they assured us. “The winds are perfect.” They added that the winds are rarely this good, meaning not too weak but also not flag-ripping strong.

They were taking lots of locals and tourists in the air, and everyone seemed to be having more fun than at a Maroon 5 concert. Suddenly I had no qualms. I handed over US$60 for a 20-minute ride, which even included a micro SD-card of free selfie GoPro coverage. Some of that footage is in the video below (the other bits were from my own smartphone and GoPro).

Mel went first, then Teresa, then Matthew (solo). and then myself. The ride, from takeoff to landing, was as smooth and relaxing as a ride in a Citroën DS with self-leveling air suspension. The guide pointed out some sites, including a new Marriott’s Hotel and a shopping mall where we would imbibe pisco sours later in the day. Mostly, though, we followed floated above the highway and the coastline, covering more than five miles in twenty minutes (about 15 miles/hour). [Strava map]

It was amazing that we were, at times, going faster than some of the cars in stop-and-go traffic. It was also mind-boggling to experience first-hand how the energy of the wind could be harnessed such that we could take off, fly, and go significant distance without a motor or even expending any calories. Talk about zero-emission travel.

Regardless of the efficiency of cloth, rope and string, it is safe to say that I am now far more enthused about paragliding than ever before.