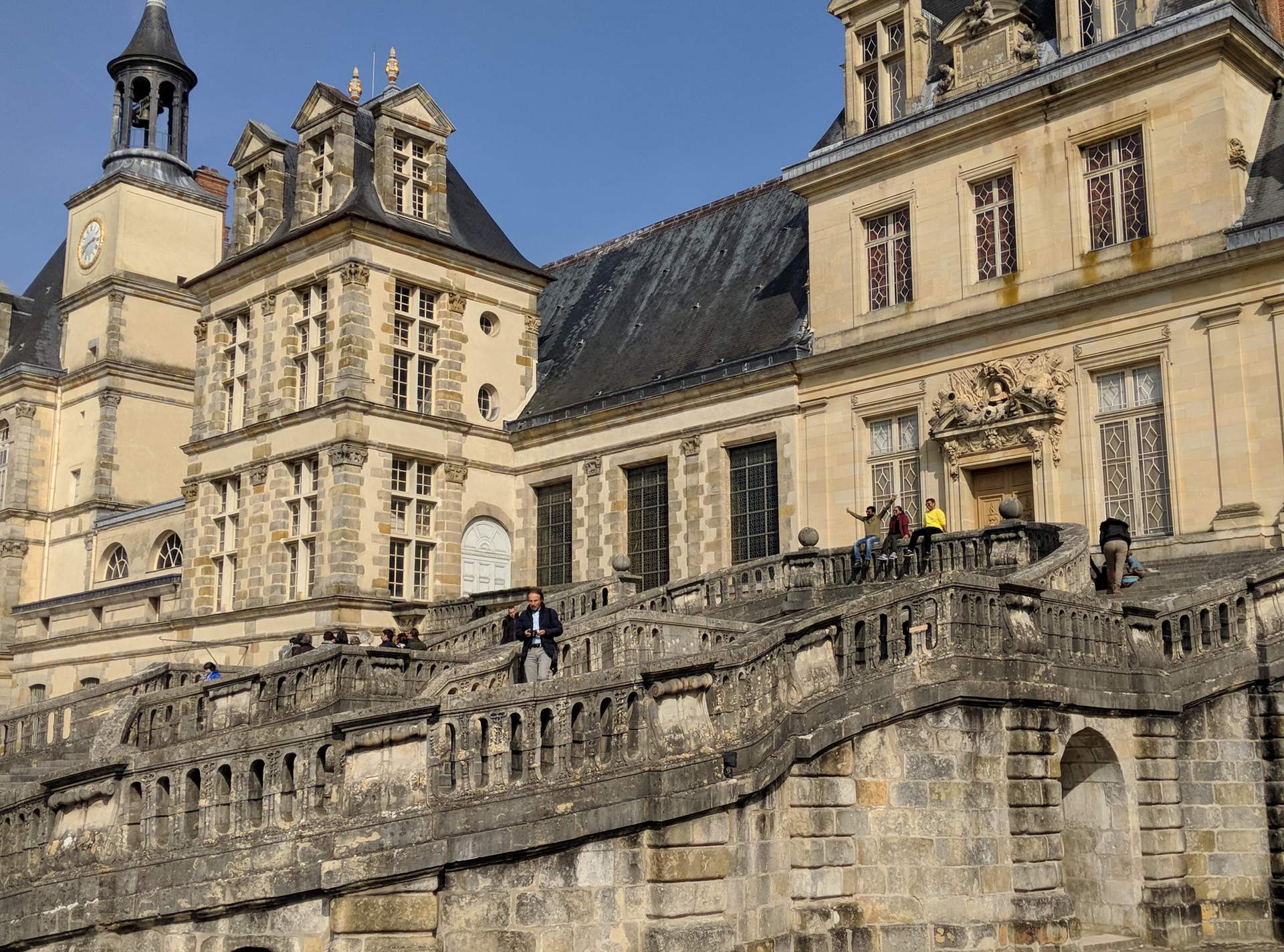 The previous day, an employee at the BMW showroom only a couple blocks off the Champs-Élysées had warned us to not come anywhere near the avenue—or any famous tourist destination, for that matter—because of the yellow vest protests happening every Saturday that resulted in a lot of violence last weekend. That was fine as my friend Angie had asked if we could go somewhere outside of the big city anyhow.

“We were thinking of going to Versailles or Fontainebleau,” I told the man. “What would you recommend?”

“Fontainebleau,” he replied without hesitation. “The royal palace was there before the one in Versailles was built. It is beautiful.”

I was already leaning towards Fontainebleau because I read that it had a nice forest for hiking, and Versailles was bound to have a lot more tourists. Not to mention I had already been inside the Château de Versailles, albeit 16 years ago. Anyhow, the BMW employee’s recommendation was the clincher.

We got to Fontainebleau via train, but got there a little later than expected because the transit directions in Google Maps did not know that many metro stations in central Paris were closed due to the yellow vest demonstrations. Thus, we had to improvise a little and do more walking to get to metro stations that were open.

We arrived in Fontainebleau late enough that we mainly had time to only visit the royal palace. It was magnificent, though, with opulent rooms and ornate fixtures from floor to ceiling. The lake and gardens surrounding the palace were precious too.

Unfortunately, we did not have time to do any hiking in the Fontainebleau Forest. Also, it was only after I returned to Colorado and my friend Heidi from Fremont was coincidentally spending about 10 days in Fontainebleau only a week after Angie and I were that I realized that Fontainebleau is particularly notable for the following:

Indeed, the Wikipedia article on the history of bouldering reads:

In the early 20th century, the Fontainebleau area of France established itself as a prominent climbing area, where some of the first dedicated bleausards (or “boulderers”) emerged. One of those athletes, Pierre Allain, invented the specialized shoe used for rock climbing.

In the late 1950s through the 1960s, American mathematician John Gill pushed the sport further and contributed several important innovations. Gill previously pursued gymnastics, a sport which had an established scale of difficulty for movements and body positions, and shifted the focus of bouldering from reaching the summit to navigating a set of holds. Gill developed a rating system that was closed-ended: B1 problems were as difficult as the most challenging roped routes of the time, B2 problems were more difficult, and B3 problems had been completed once.

Gill introduced chalk as a method of keeping the climber’s hands dry, promoted a dynamic climbing style, and emphasized the importance of strength training to complement skill.[24] As Gill improved in ability and influence, his ideas became the norm.

(I included the two paragraphs about John Gill above because Gill was from Fort Collins, Colorado and a mathematician at CSU. The place in bouldering history that Fontainebleau and Fort Collins have is so fascinating.)

Too bad I didn’t know the above info before going to Fontainebleau. So I ended up kind of living vicariously through Heidi, who managed to do quite a bit of hiking and bouldering with friends and family. Heidi also attempted to do an impromptu half-marathon there, but it was cancelled at the very last minute because someone died in the 10k race a couple hours before.

Certainly, the next time I go to Paris, I’d do a side trip to Fontainebleau again and this time do some hiking and bouldering. And visit INSEAD campus. I’d definitely try to spend more time than a mere afternoon.