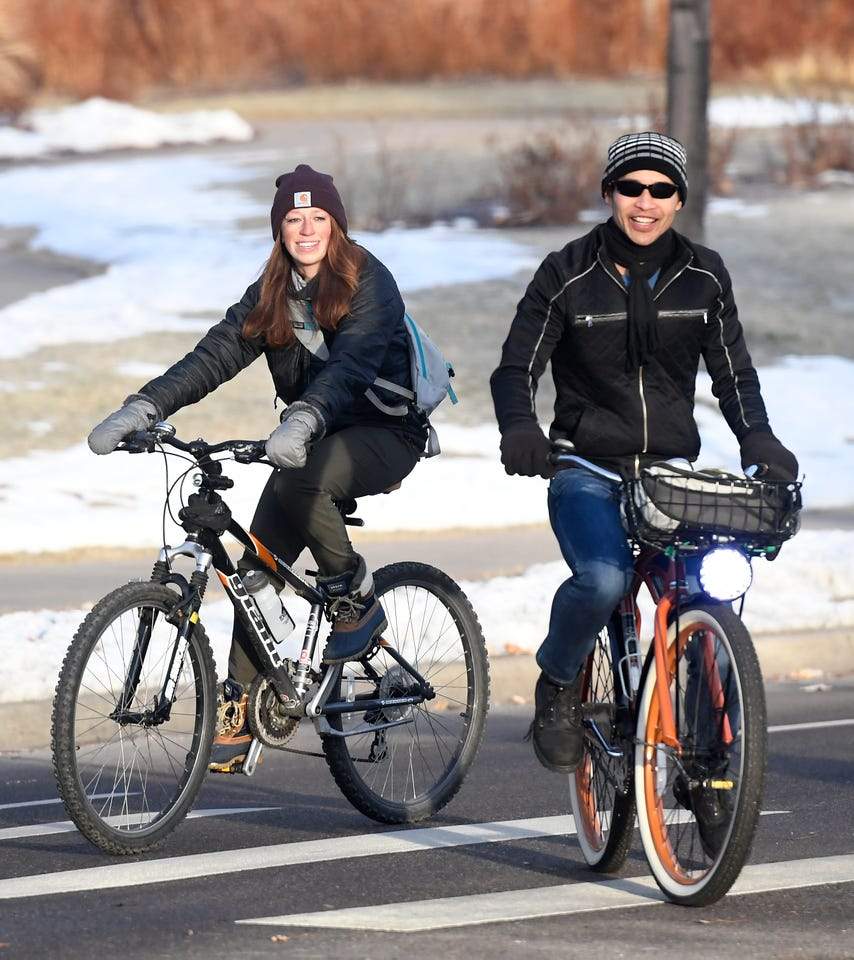 Ultimately, I think I was able to convince her by assuring her should we be fine with a scarf, gloves, wool hat, jacket, thermal underwear, and boots. So it’s kind of funny that on the morning of the event, she was up and about much earlier than I was, even arriving at the Colorado State University campus before I had rolled out the garage on the Huffster. (That was partly because I kept telling Google Home to snooze when it kept trying to wake me up.) Because of my tardiness, we agreed to meet at Old Town Square instead of the CSU Oval like originally planned.

It turned out that unlike at the summer’s Bike to Work Day, there were no breakfast stations at Old Town Square. So I kept riding down Walnut Street past Happy Lucky’s Tea House where I had once volunteered as a bicycle mechanic for Winter Bike to Work Day when it was 15 degrees. Fortunately, it was at least 5-10 degrees warmer today.

I didn’t see Brooke there so kept on going, but then I heard my name called out. Not only was Brooke on the sidewalk but so was Rod, an older gentleman who I had wrenched with on that previous Winter Bike to Work Day. He was being a volunteer mechanic again this year.

After mingling there for a few minutes, Brooke asked where we should go next. “New Belgium,” I responded. “They have a fire.”

It turned out several breakfast stations had fires or heating lamps. Such as the Exchange, a new retail district in Old Town Fort Collins featuring buildings made from shipping containers.

We continued hitting breakfast stations all the way over to CSU, which is where Brooke and I parted as she had to work and I had to go to Snooze to meet up with Emily and her friend Victoria.

We had a nice time catching up, after which I rode back to the home office (“I am taking the long way to work today,” I told multiple people). By the time I got home, I had plenty of free food for a second breakfast:

Another nice surprise came later in the day: a photo of Brooke and I riding in the local newspaper, the Coloradoan. That was pretty funny considering that neither of us had even realized the paparazzi was out!

“I’m glad I came out to do this,” Brooke eventually admitted later that day. Me too.