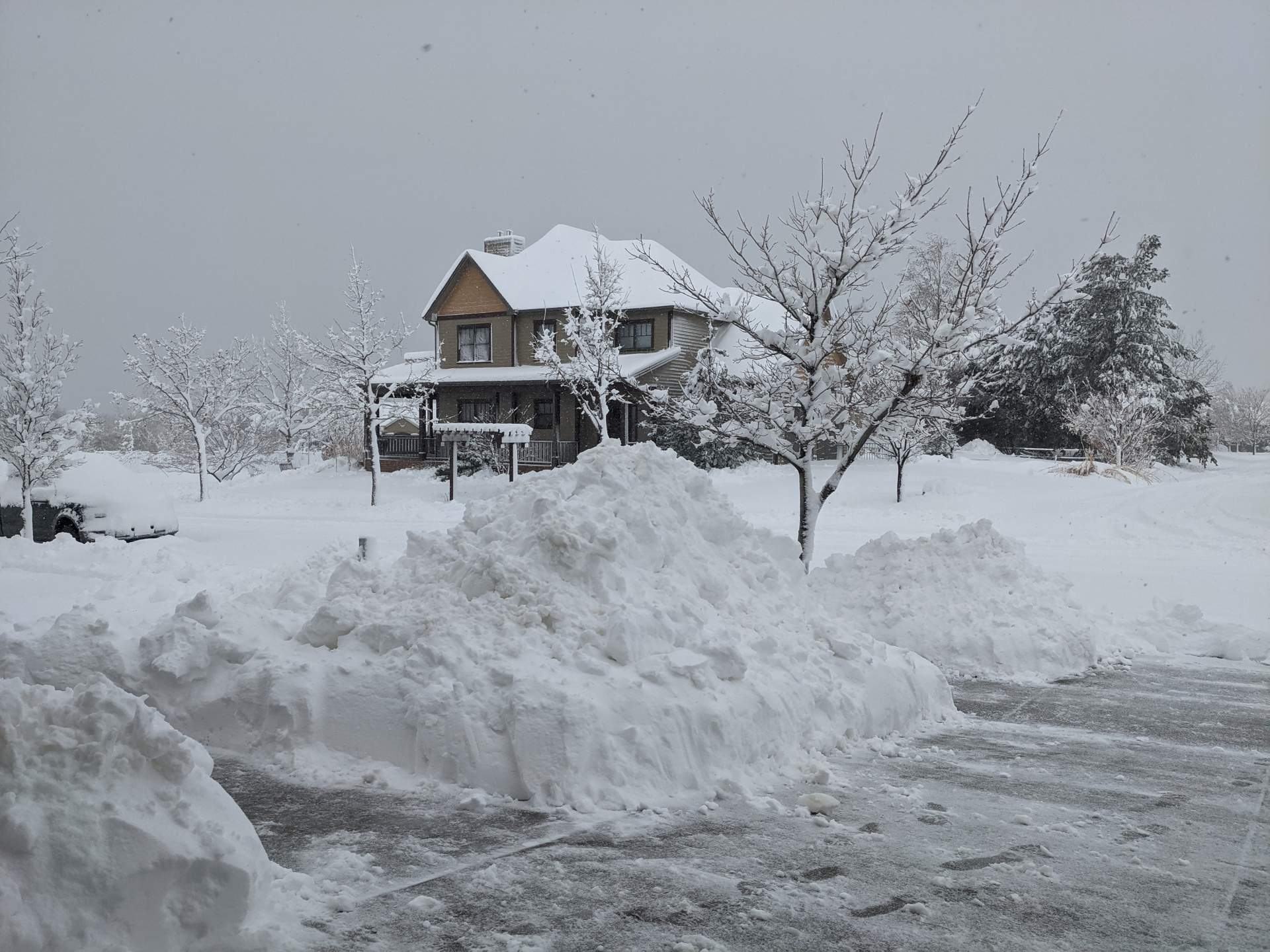 It was my friend Raquel who first alerted me to the snowstorm that was to occur later in the week.

“Be sure to close your windows this weekend,” she wrote while forwarding an article by the Denver Post that predicted perhaps 12 inches of snow.

“It looks like the snow may be big!” I replied. “I’ll keep the windows closed.”

As the week progressed, the forecasts got bolder and more dire. It seemed like with every passing day, the predicted snow totals increased. The day before the predicted Snowpocalypse the U.S. National Weather Service claimed “up to 30 inches possible” near Fort Collins. It also released the following graphic, portending extreme conditions in my area.

“EXTREME!” I wrote to my friend Jim who had posted the graphic. “What are we going to do?”

On the morning of the supposed Doomsday I practically leaped out of bed and was prepared to run down to the garage to grab the snow shovel. After all, the snow was predicted to start falling at 5 a.m.

Hence, I was quite surprised to see this in the back yard when I came down to the first floor. There was no sign of white stuff anywhere, either in the sky or on the ground.

I decided to take advantage by going for an unplanned five-kilometer run. During the run I experienced only refreshing sprinkles of rain that turned to light sleet by the end.

Finally, around noon snowflakes starting falling. But the temperature was around 34F (1C)—too warm for anything to stick to the ground. It was only around 4:00 or 5:00 p.m. that snow finally started to accumulate.

At 9 p.m., I shoveled the driveway, which took less than 20 minutes. It definitely seemed like an underwhelming amount in light of the predictions.

“I am starting to panic because so far today the weather forecasters have been extremely wrong,” I quipped to Jim. The Snowpocalypse was seeming more like the Great Snowstorm Swindle.

“We might be tempting fate,” Jim wrote back, “but so far very not snowpacalyptic.”

It turned out that Jim’s words were prescient. The next morning, there was definitely more snow. A lot more.

I grabbed the snow shovel almost immediately after waking up and went to work. It took one hour, twenty minutes to clear the driveway and sidewalk. At times I wondered if the snow shovel was going to break. Fortunately, it held up.

Later in the afternoon, I shoveled another time (only 20 minutes) and then attempted to go snowshoeing on the neighborhood trail. I say attempted because I didn’t get very far. I turned around when I started post-holing more than two feet!

However, the next day the snow had stopped with maybe about 18 inches of snow already fallen. The sky was sunny, causing the snow to quickly compact down, resulting in trail conditions that were much better for winter sports. I went snowshoeing again in the afternoon and there were already cross-country ski tracks on the trail. Apparently they were left there by my neighbor Jamie.

On Tuesday morning at 4:00 a.m., the city had a vehicle plow a 10-foot wide swath on the road in front of my house—something it has only done once or twice while I have lived here, including one time 15 years ago. It would ultimately take about a week for the snow to have mostly melted.

It turned out the snowstorm was in fact enough to warrant being called a Snowpocalypse, if barely.