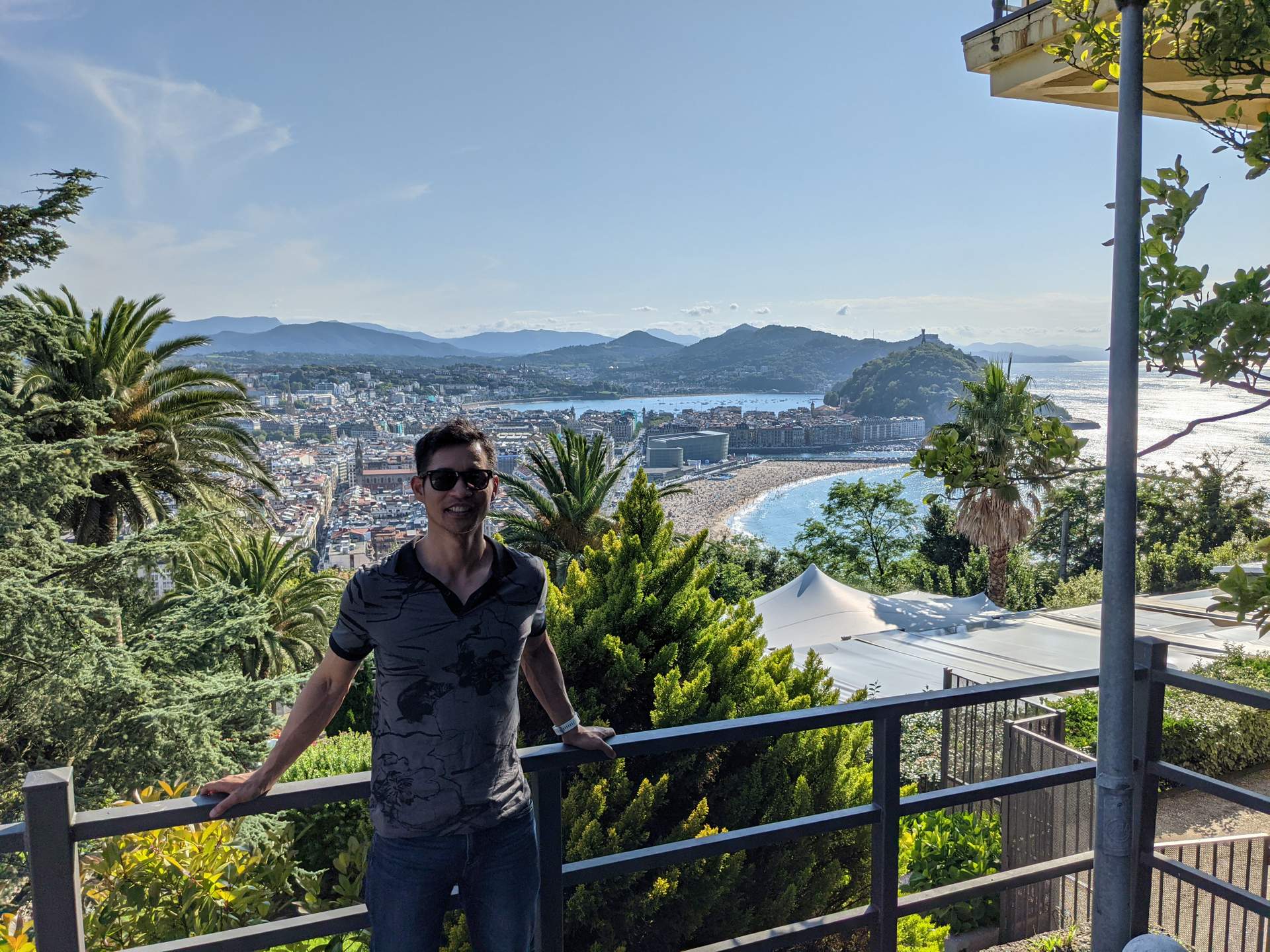 In between VaughanTown and a return trip to Galicia, I spent a weekend visiting Antxon and Vicky, two Spanish friends who live south of San Sebastian. I last got to see them when they visited Colorado in 2019, so it was more than two years since we got to hang out together. Moreover, the most exposure I had to San Sebastian before was walking through it one afternoon during my Camino de Santiago in 2017, so it was fun to see a little more of this beautiful city by the sea.

Vicky—like many of her friends—had just gotten the second Pfizer vaccine the day before so she was resting with a slight fever. (Happily, as expected, her vaccine side effects lasted only a day and she felt much better the day after.) Meanwhile, Antxon and I went to a nearby cider house for a feast of tortilla de bacalao (Spanish omelette with codfish), bacalao frito (fried codfish), chuletón a la parilla (grilled T-bone steak), queso nueces y membrillo (cheese, nuts, and quince—a fruit that looks like a pear), pan (bread) and of course sidra (cider).

We also visited Mirador de Ulía and Monte Igueldo, sites where Antxon and Vicky held their wedding and reception eight years ago. They had astounding views of the city.

Of course, because Antxon and I are both runners—in fact, the Fort Collins Running Club even bestowed honorary membership for Antxon since he was running international races wearing FCRC gear—we went for an evening run. We also watched the Tokyo Olympics and got caught up on our lives.

One thing that was delightful was seeing all of their Colorado memorabilia around their house! Antxon was wearing the Boulder shirt he picked up when we visited the Pearl Street Mall in that Colorado town in 2019, and there was a Colorado print in his bathroom and a Denver Broncos football in the guest bedroom.

Seeing his Fort Collins Running Club truckers hat was particularly amusing, because my friend Mel (the official FCRC administrative coordinator) and I went to some lengths to get him that. We sent him one in December, but even two months later it still hadn’t arrived at Antxon’s house. The Spanish post office claimed it was sent back to me, but since I hadn’t received it by late January I figured it was gone. So we sent Antxon another one but this time to his work address, and he received it in a little more than two weeks. A month after that I did indeed receive the original hat back in my mailbox!

This visit to San Sebastian was not much longer than my first visit, but it’s always good to see my friends up there.

VaughanTown students had told me about the San Sebastian’s famous cuisine, including Gilda pintxo which are tapas of chili peppers, anchovies, olives. Manuel C., an Andalucian, specifically told me that he wanted to visit the Akelarre Restaurant, which was awarded three Michelin stars and whose chef is Pedro Subijana.