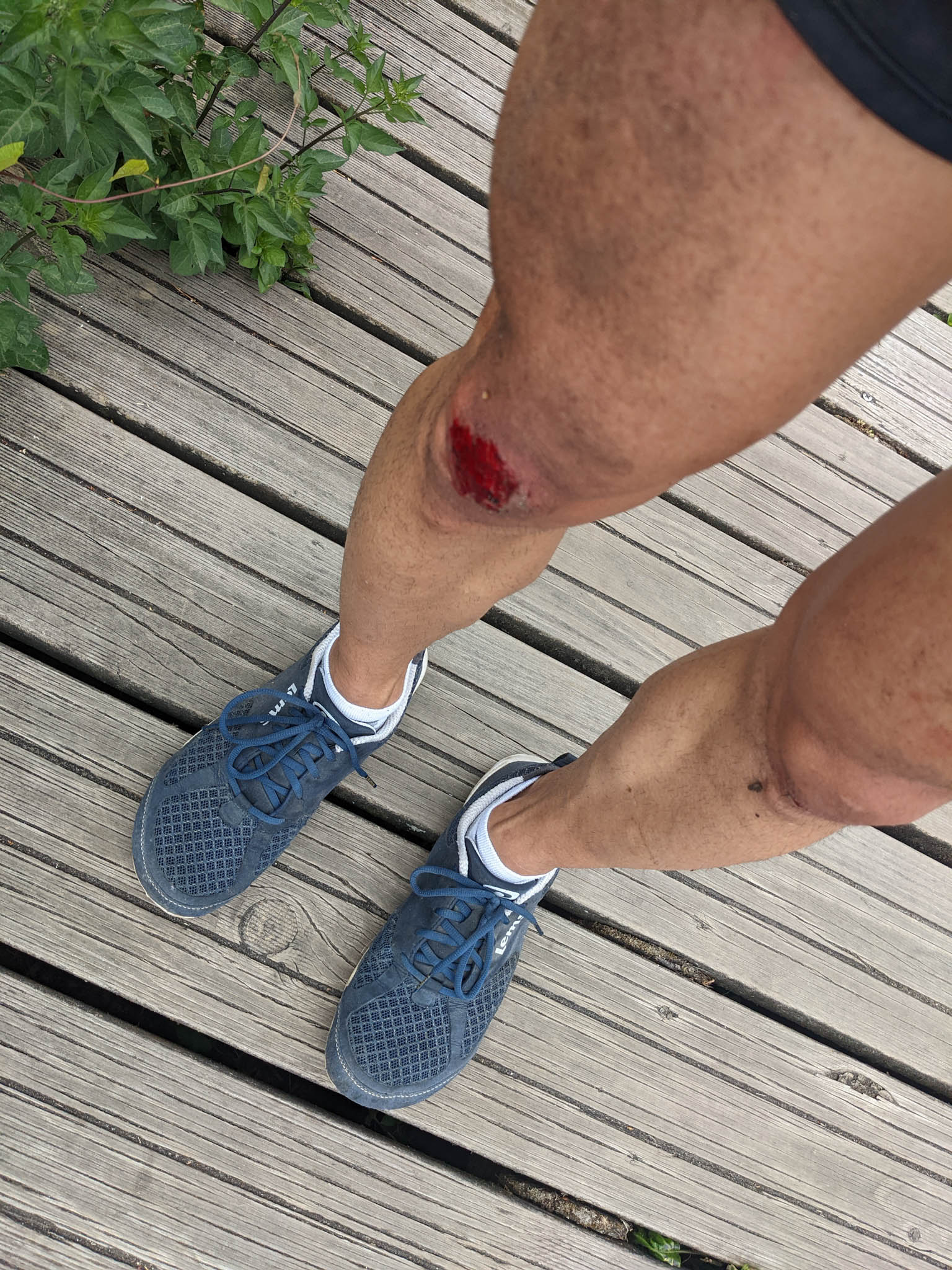 May was, by and large, a great month, and life was good. We had gone to A Coruña, and Andrea had passed an intensive medical course. Then we attended a delightful car show. My fitness was coming along, both on the bike and while trotting. I was consistently doing long runs, tacking on two kilometers every seven days. In A Coruña, I ran 23 kilometers, so the following week in Pontevedra, I was going to run 25.

My right foot hit something on a super rough, broken concrete trail mid-stride. Suddenly off balance, I had no time to react, not even to put a hand out in front of me. I instantly went down.

Went down would put it mildly. In fact, with zero time to react, I promptly landed on my face, my mouth smacking hard onto the pavement.

“Oh no,” I whined as I remained on the ground. Eventually, I stood up while running the tongue underneath my front teeth. I took out my phone and looked at my reflection on the screen. I had chipped not one but two teeth. And I was a bloody mess.

My run was over, and I walked toward home, still 1.5 kilometers away. Minutes later, another runner saw me.

“¿Qué pasó?” he asked, pointing to my injuries. I explained as calmly as I could that I had tripped and fallen.

“¿Dónde?” he asked. I pointed behind me, saying it was only about 400 meters back there.

The kind man then urged me to call emergency services at 1-1-2, but I insisted that “estoy bien” and that I lived only a kilometer away. I was going to walk home, wash up, and assess the damage. At the very least, I needed to visit a dentist in the future.

He asked if I was dizzy (I wasn’t) and kept repeating the emergency hotline number (“ciento doce, ciento doce“). I explained that my girlfriend was a doctor working in the emergency room at that very moment, but that I probably would wait for her to come back home later that night. He wished me well and we parted with him saying “ánimo” as a word of encouragement.

Back home, I spent about two hours washing up. My right knee, right pinky, and left palm were particularly torn up. My upper lip was badly swollen. I had gashes beneath my nose and on the chin.

This was the worst accident I ever had, but I quickly decided it could be worse. I lost only the lower 20% of one of my front teeth, and a corner of a tooth to the side. That tooth had previously been enlargened by an orthodontist with composite material, so I lost little of the natural tooth. I was confident the front tooth could be repaired, as unsightly as it now was, without crowns or implants.

I didn’t break any bones, and I was pretty sure the wounds to the face would heal with minimal scarring, at least in the long term. The right knee was another matter. I was going to have a keloidal scar there for sure.

The blow to my confidence was worse. This was the third time I had tripped and fallen in the last year alone, which was not a sustainable rate. I decided that I was going to have to make some changes. As much as I like running, I hate getting my skin ripped apart and teeth broken even more.

One of the things I did that afternoon was to look for other people’s experiences dealing with tripping and falling. I found a thread on Reddit entitled, “Have you ever tripped and fallen while out for a run?” It was a little comforting to see that other people had similar experiences to mine, minus the teeth-chipping.

In that thread, someone mentioned that the wide toe box on his new shoes “caught every root and rock sticking out of the trail.” I thought that was interesting, but at that point was still thinking that I was just clumsy and trip-prone, especially at the end of a long run when I am tired.

The next day, I posted a message on the Fort Collins Trailrunning Facebook Group for people’s best tips on avoiding tripping. There were suggestions such as:

I was particularly struck by how many people mentioned they solved their tripping issues when they reduced their shoe size by a half-size. That made me think about all the times I had tripped. Each time in the last five years was when I was wearing size 10, wide toe-box Lems Primal 2 shoes.

Compare them with my size 9.5 Puma H. Street shoes. I have only tripped and fallen once (in 2006) in the last 17 years despite running races from 1 to 100 miles in those shoes, both on- and off-road.

Looking at their profiles, it makes sense that the Lems would be catching on more roots and rocks.

From now on, these are the things I will be doing to avoid tripping and falling while running.

After tripping and falling at the end of a 26.2-miler last year, I already had resolved that I would race road marathons only. My recent accident only strengthened that resolution.

A common reason cause of tripping are shoelaces that become untied.

To avoid that, I highly recommend tying the shoelaces with a double slip knot. (Do not confuse this with doing the standard slip knot twice.) Since switching to that knot 15 years ago, I have never had a shoelace become accidentally untied.