Yesterday I surpassed 400 miles with the 5.8-ounce Puma H-Streets so I thought I would post an update. Clearly, my early prediction in the Rolland Moore Park 4k that these shoes “will probably last just 200 miles” was quite off the mark. In fact, despite having over twice that mileage and having been washed (scrubbed with a brush and laundry detergent) every 1-2 months, the fabric is untorn and reasonably unworn, and the sole exhibits minimal wear.

This is impressive for a shoe that has been used in several rugged trail runs, including the Quicksilver 50 Mile run which other participants could not believe I was doing this trail race in shoes resembling racing flats. Yet, despite running that event with holes in my socks, I did not get a single blister. I also did not have any foot, leg, or knee pain (excluding sore muscles, of course).

My feet and legs seem to have become so accustomed to this ultra-lightweight and flexible shoe (which I liken to a sock and enables one to run naturally, as if he were barefoot) that when I went back to using the 1000-mile Nikes for a single run, I actually had some arch pain.

Now I am guessing the H-Streets may last as much as 800 miles. Stay tuned!

August 10, 2009 Mon: The shoes are still going strong after 1060 miles. I am still using the pair of shoes shown above for select races, and last used them in the Run for a Child’s Sake 5k. 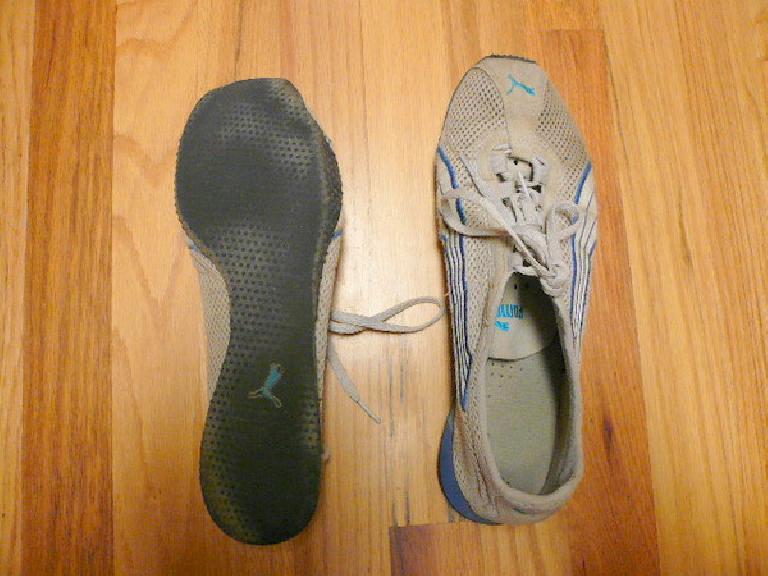