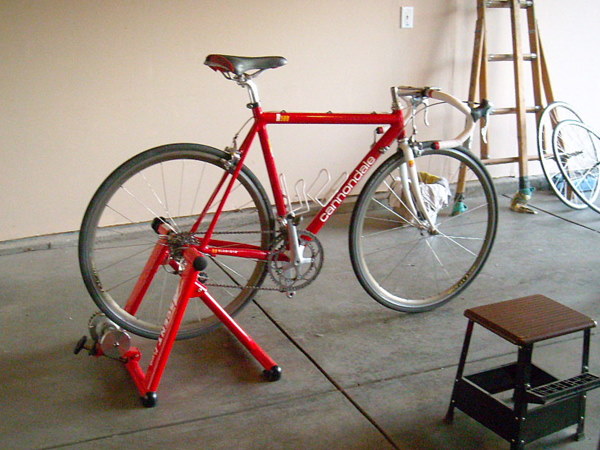 Considering how much bicycle work I was planning on doing this winter, I was interested in getting a decent bicycle workstand. For my whole life I’ve managed to make do with the ad hoc method of flipping the bike over and leaning it against a wall like a newbie gymnast trying to learn how to do a headstand. But now that I have a bit more disposable income and space than a starving college student, it seemed like it would be fine to invest in a device that could actually keep the bike stable and the saddle unmarred.

What to get, then? There are quite a few possibilities that are marketed, in order of increasing wallet pain:

So what did I end up getting? The answer: none of the above. All of them had too many drawbacks. In particular, I wanted something that could hold my bike stable without touching the bike’s paint or tubes, yet allow the spinning of the wheels to, say, fine-tune the derailleurs.

I thought back to 10 years ago when I was building the recumbent. I recalled fine-tuning its derailleurs for the first time, with the ‘bent mounted on a trainer that I once had before I lent it to an acquaintance who never returned it before moving to who knows where.

“That’s the solution,” I thought. Not only could I use it as a workstand, but I could use it to ride indoors (actually, its intended use).

The main drawback of the trainer as a workstand is that you must have at least the rear wheel attached to the bike to work on it. But this is only a drawback if you do not have a rear wheel in the first place (e.g., if you were building a new bike from scratch) or if you wanted to work on the bike with the rear wheel removed to, say, wash the bike between the chainstays.

I found a like-new Ascent fluid resistance trainer on Craig’s List for $75 (original retail price: $200). Like most stationary trainers, it clamps onto (actually, around) the rear quick release and never touches the bike’s paint. It only takes about a minute to attach.

I first used it when swapping out Canny‘s Campagnolo components for Carrie‘s Dura-Ace ones. Worked like a charm.

Then I used it to inspect Cranky‘s bottom bracket. Note how stable the bike is:

Finally, I brought the trainer over to Leah’s place the night before the Tour de Fat, and tuned her mountain bike’s derailleurs on it in her living room within a matter of minutes. “This is the first time the bike shifts properly,” she said of the bike after test-riding it after the tune-up. A friend of hers and myself had tried to do it before on separate occasions, but did not have the luxury of a workstand to do so and the trial-and-error technique of making an adjustment and then riding and re-turning was not successful.

My recommendation for anyone thinking about buying a “real” workstand, then, is to not bother. Buy a stationary indoor trainer instead!

Thanks for the advice. Just bought a Park Tool PRS-20 stand over ebay for $159. I think I am going to sell it, since I have already owned a bike trainer for $40. ↩ Reply