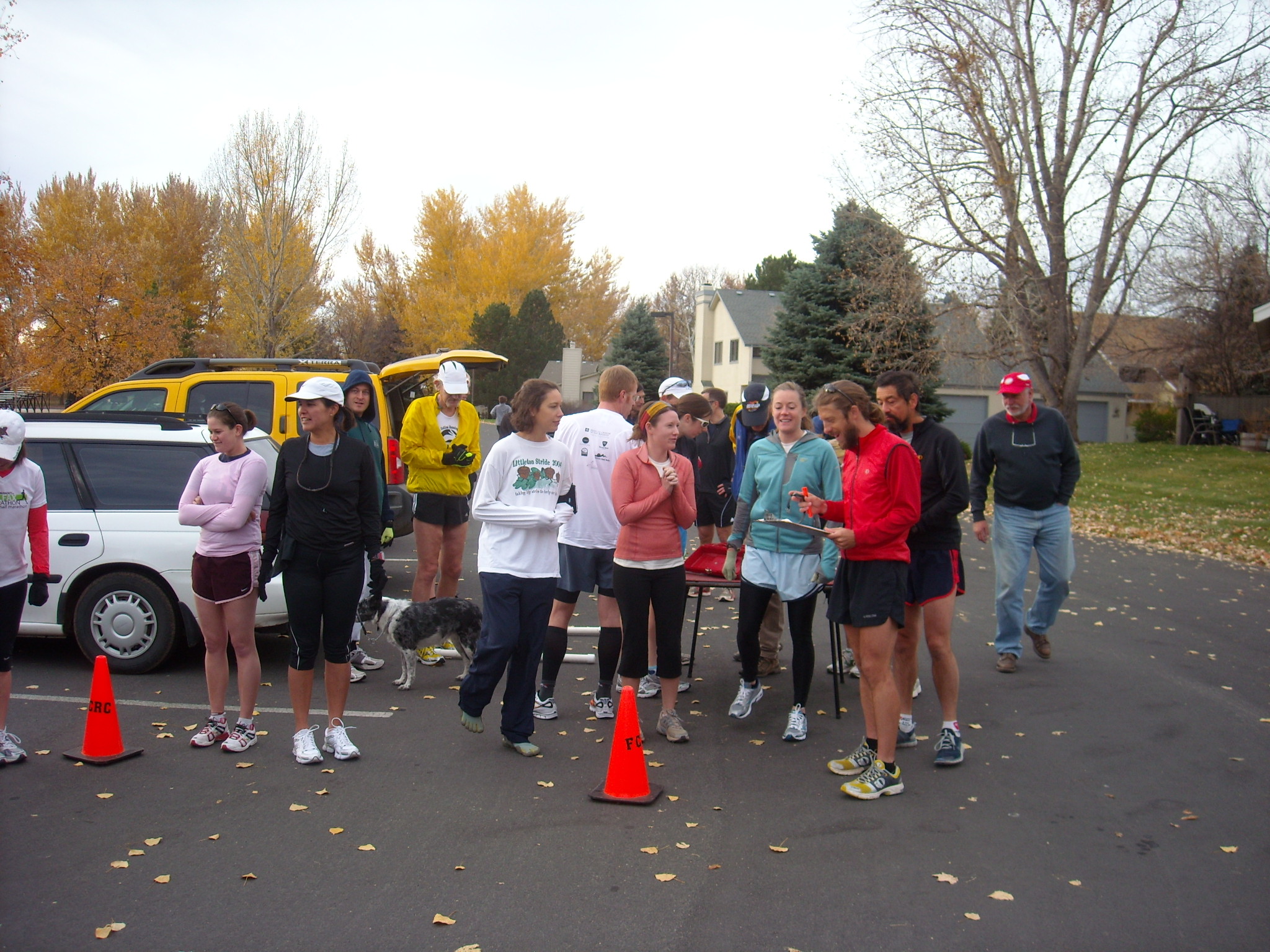 There would be no excuses provided by Mother Nature today—with sunny skies and temperatures well above 50 degrees by 8:00 a.m., this was about as glorious as a November Northern Colorado morning gets. But I still had plenty of them in my back pocket in case of a poor result. This was just the second time I ran since the Boulder 100; the other time I ran in the last three weeks, I felt slower than a mockingbird with a wing in a cast; and there were so many racers today (44, a record turnout for this club-only event).

Therefore, my attitude was this as just another (oft-quoted) “training run.” I even wore my heart rate monitor for data-collecting purposes, something I am loathe to do in a more serious race since I don’t like wearing anything around my lungs while breathing hard.

The first mile of the run was a reminder of why wearing a heart rate monitor in a footrace is not a good idea: the HR strap kept sliding down as stomach ebbed into peaks and valleys. Having to pull it back up was a needless distraction. Seconds were sucked into a black hole during that process.

At the turnaround, my friend Alex M. (who started a few seconds after me) was within spitting distance, but I was able to pick up the pace being aided by a shallow downhill. Another mile later I caught Jonathan and Leah, but probably expended too much energy in the euphoria of the pass. My leg turnover and stride length suffered after that while I heaved and panted.

With about 300 meters to go, Alex M.’s wife and daughter shouted “go, Alex!” as footsteps rapidly came upon me. But it wasn’t Alex M.; instead it was 50-something Alex A. He’s been an inspiration to me, seeing how much faster he’s gotten the last couple years by diligently doing the Tuesday night track workouts (and other regular runs, I presume). Today was just more confirmation of his progress. It just comes to show that even in one’s 50s, one can still improve and run a 5k FAST.

When I crossed the finish line, the Garmin read 20:06, which was the first time I finished a true 3.1-mile race in over 20 minutes in a little while. Yet, it was my best time for the Warren Park 5k (having now done it four times) and four seconds faster than last year—no doubt aided by the better weather this year. It turned out I didn’t need the list of excuses from my back pocket after all.