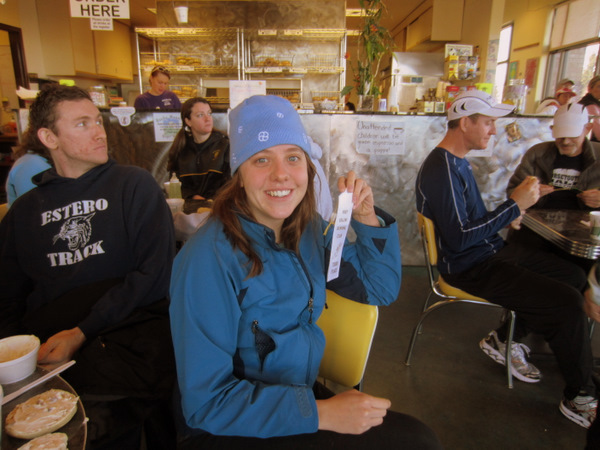 “Maybe I can get another one,” said Kelly. What? A ribbon.

Yes, it was Tortoise & Hare time, the Sunday of the month where we got to play chickens and foxes. Or cats and dogs. Whatever your preferred creature, the chase was on.

Connie, this year’s Fort Collins Running Club president, had both laid out the course and promised that it was really flat. By her Boston Marathon running standards it certainly was, but I felt the outbound stretch was a slight uphill amounting to perhaps a 1% grade. Or at least that’s what I told myself as my Garmin was giving me disappointing instantaneous pace readings of just seconds under seven-minute-miles, a pace a couple years ago I’d have considered pedestrian for a five kilometer race.

I’d pick up the pace a little bit in the second half, careful to hit all the apexes as if I was autocrossing and speeding by a couple dozen hares within the final half-mile. “You were flying when you passed me,” claimed my buddy/neighbor Tim, who put in one of his better efforts. In fact I had narrowly run a negative split.

Yet my time (20:46) was my slowest 5k in several years! Ah well, what could I expect—I have been running less frequently lately than Rush Limbaugh hits the gym.

Kelly, on the other hand, was done well before I had crossed the finish line. In this staggered-start race, she beat her predicted finish time by a whopping three-and-a-half minutes—easily a personal best. Which earned her a third place ribbon, matching the white one she got in the November Tortoise & Hare.

She seems to have my number in this race series. It’s like we’re Wile E. Coyote and the Road Runner.