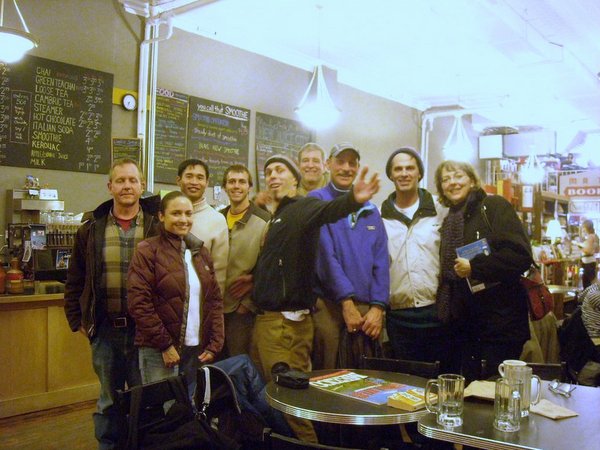 Back in high school, I took a few years of Spanish—and even reached the Advanced Placement level. Which is to say I took AP Spanish and not that my Spanish competency was any more advanced than a native Spanish-speaking five-year-old’s. Or a baboon’s, come to think of it. I could speak and understand an hispanohablante about as well as my kitties can woof like a dog.

So my español has come quite a ways since then, as I now have no problem conversing with Latinos in their native tongue or even give a spirited impromptu explanation in front of a Guatemalan Board of Directors. How? Practice!

Of course, taking a week of language immersion classes in Boquete, Panama helped, and so did watching all 52 episodes of Destinos. But what has helped the most—particularly with being able to improvise sentences on demand—were local Spanish conversation meetings. I’ve been attending some on a weekly basis for the last six years, and have been the lead organizer of them for the last five.

It took me long enough, then, to finally create a website for our group: FCSpanish.org. Officially, we are called Fort Collins Spanish, and anyone can join for free. The site has a section on the history of our group and a FAQ (frequently asked questions). What it doesn’t mention are how the group has really helped regular members improve.

I may be the best case study. When I first joined, I couldn’t come up with sentences much longer than ¿Cómo estás? without stammering and setting the mental gears grinding in search of vocabulary and verb conjugations. It probably took at least four months for me to become a lot more comfortable coming up with spontaneous paragraphs of Spanish, and at least a couple years before I could think of myself as having “adequate conversational fluency.” Which may seem like a lot of time, but looking back doesn’t seem like much since, again, I’ve been going to the group meetings for six years.

Consistency, then, was the key. Hence, I encourage all local Spanish speakers of any level to join our group and come to our meetings, as not only is it good practice but it is always a fun time among friends.

You can see when and where Fort Collins Spanish meets by visiting our “Meetings” web page, or by joining our Facebook group or our Yahoo! group. Hope to see you at our meetings. ¡Hasta luego!