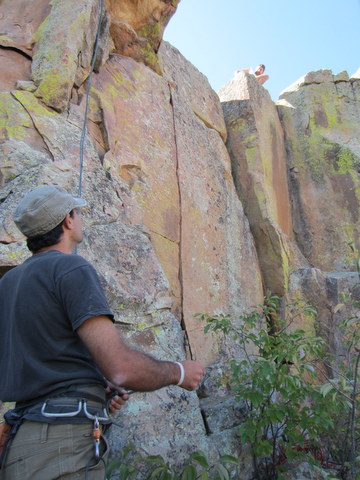 The day after a bunch of muscle-bound dudes loaded up a behemoth of a moving truck with all the Vails’ worldly possessions was not only a little too quiet but also a trifle melancholy. Not only were my best neighbors gone, but so was my best bud Tim. No one is ever entirely replaceable, plus the number of close male friends I have doesn’t require a Rolodex to keep track of. And it was even more rare that I’d have a really good friend of any gender who would do so many different activities with me, including some of the more offbeat ones like Spanish Conversation and swimming across a lake.

But thankfully, I met another fine individual from my Spanish conversation group. And at least for a few months of the summer, Mehdi would fill a void left by the departure of Tim.

Mehdi displayed an amount of humility, thoughtfulness and kindness that would do the Dalai Lama proud. But belying his cheery exterior was a remarkably intelligent man one who not only spoke Spanish that was among “the best in the group” (said our friend Stan), but also managed to graduate from high school ranked in the top 80 of the entire country of his native land of Iran. This was before he came to the United States to study and pursue a career in electrical engineering.

He and I just happened to have a mutual friend Rhea (one of the first people I met in Fort Collins) and the three of us started to climb indoors. Mehdi then became the most reliable climbing partner I’ve had in about a decade, and soon we were cranking out climbs with such efficiency that there was a day when I was able to do fifteen routes in the gym—easily an all-time record for myself to date.

He also managed to bring in some friends from work, and soon a few of us were climbing outdoors as well in the Horsetooth area. There was another time he came out to test out my new kayak sailing rig with me.

Alas, it was not to last long. In the late summer, he was recruited to work at another engineering firm, this one located in the Pacific Northwest, and it was an opportunity too good to pass up. So in mid-September he, like Tim did a few months earlier, jumped in his car and drove towards the shores for a new city, a new life.

“It’s so not fair,” our friend Katherine later lamented days after his departure. “He was such a great guy, and now he’s gone!”

The great thing is that Mehdi has family in Fort Collins so we will be sure to see him again. We’ve also talked about doing a trip overseas together to do some volunteer work. But until then, farewell amigo. We miss you out here.