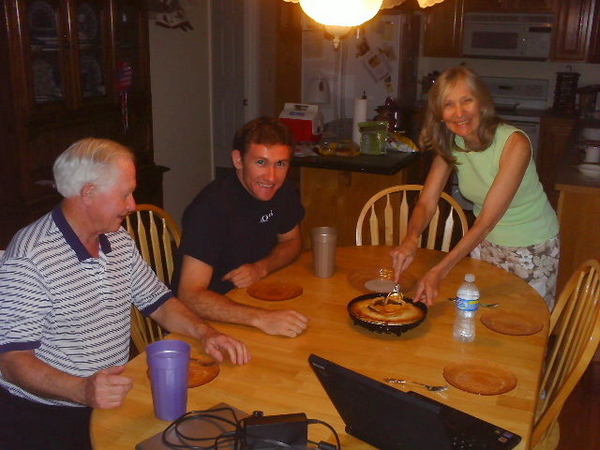 Six-and-a-half years. That’s how long the Vails and I had been living next door to each other. They moved in (from Florida) first, six months before I purchased my home. Alas, they would be the first one to go. They just moved out of the house—coincidentally, on my birthday—and are on their way south. Back to Florida, where the winters will be warmer and they have additional family.

I already wrote about how they had become part of my surrogate Fort Collins family, so clearly I will miss them. Tim in particular had become my best guy friend, and it feels strange not having him living just 50 feet away.

At least I had plenty of time to prepare for this and we were able to spend a lot of time together over the last month.

The latter was enabled when Tim amazingly finished his entire Masters of Business Administration (MBA) program in under 10 months (“less tuition,” he explained about doing it so rapidly). This gave him a block of five weeks of free time before his family had to move. He hence was once again able to come with me to weekly Fort Collins Spanish conversation meetings, French Book Club, Intermediate French conversation, Tuesday Night Track workouts at Colorado State University and many short morning runs around the neighborhood. The two of us had been learning Chinese as well, so we’ve had several comical elementary conversations in Mandarin on the way to/from these events in the car.

In addition, we went to a Bicycle Month Kickoff Party at the Fort Collins Bike Co-op, First Friday Poetry Jam, the Transit of Venus, two concerts at the Taste of Fort Collins, swimming in the Hearthfire pool one night just days before the horrible High Park Fire, a going away party for him at the Rio Grande with margaritas, and Old Town until midnight when Tia and Jon came up from Colorado Springs to visit.

For most of these things, Kelly was able to join in the fun so she got to spend a lot of time with him too. The final time was—while a crew of burlesque movers were loading up a yacht-sized semi-trailer with all their worldly belongings—Kelly snuck over to my house while I was out. She came to plant a bunch of pansies in an empty garden bed as a surprise birthday present for me, and Tim waltzed over to lend her a hand. I returned home before they could finish planting all the flowers, but was still immensely touched and surprised. It was also good that I did so as the three of us got to hang out one last time.

“The three of us really bonded over the last few weeks,” Kelly later told me. Indeed.

Of course, I will miss Tim’s folks Dick and Dee as well, particularly Dick’s knowledge of history and Dee’s homely cooking and crafts. They gave me a lot of things they couldn’t keep so I have many mementos to remember them by. This includes an oak rocking chair that Dee’s mom gave her many decades ago, a chair Tim and I plopped down in my master bedroom and has quickly became a favorite of Oreo and Tiger.

Tim’s sister Jennifer still lives down in Castle Rock (near Denver), so he may be coming out to Colorado now and then. I’ve told him many times he is welcome to stay over at my place when he does, so hopefully we will get to see him then. In addition, Kelly’s grandmother lives near where the Vails are moving to in Florida, so Kelly and I have all the more reason to go down there and visit them in the future.

Until then, hasta luego, au revoir, and å†è§ (záijián) to my three dear friends and best neighbors ever.