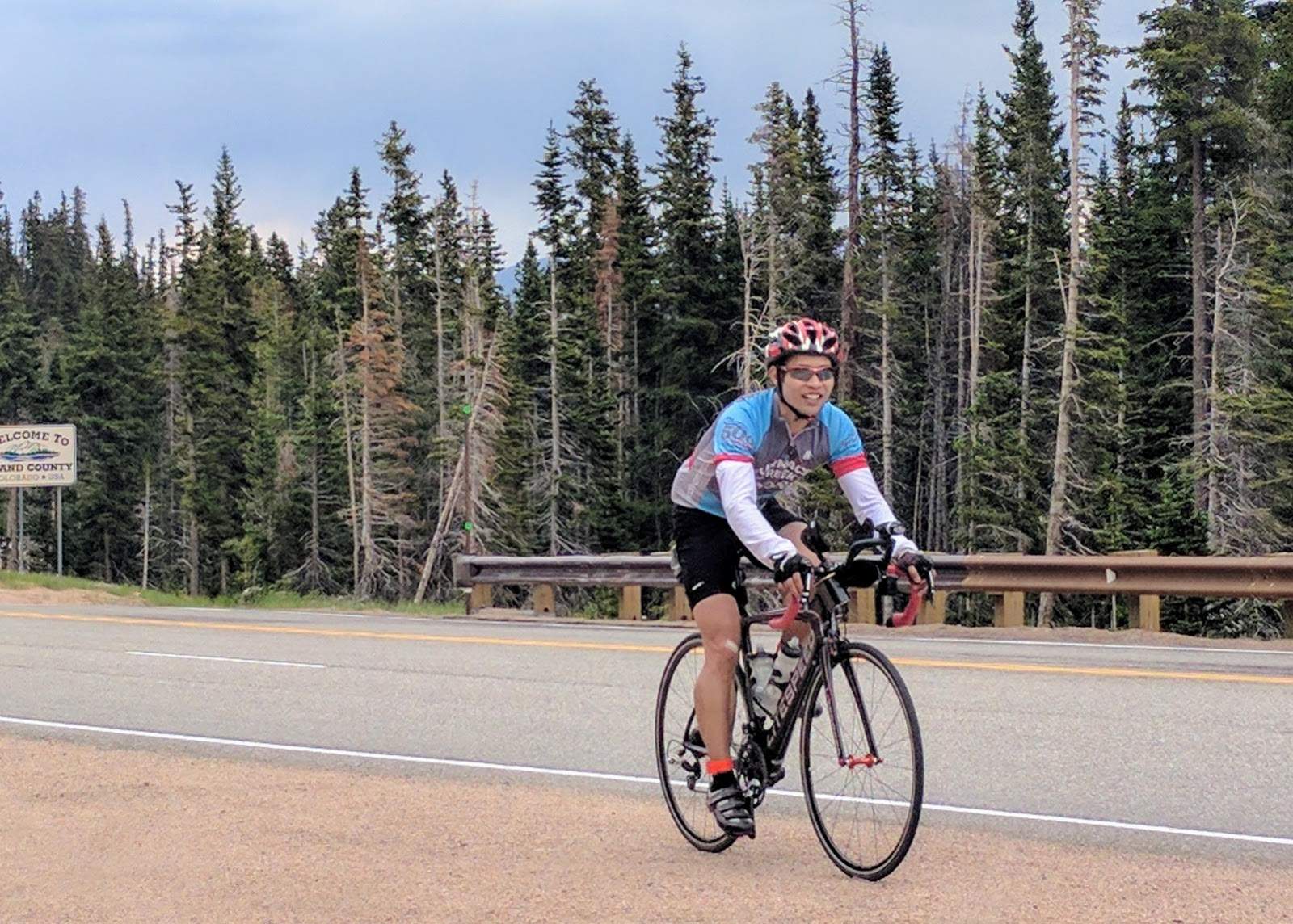 I had previously biked few of the roads in the Tim Kalisch Memorial Grand Loop double century, but had a healthy respect for the monstrous climbs it contained. This explains why after a half-mile after commencing with the second, 3:00 a.m. wave of 25 riders (the first wave of about 5 cyclists started at 2:30 a.m.), I was already off the back. My strategy was to ride easily through the first 55 miles of this timed tour to conserve energy for the 26-mile, 4600′ hors catégorie climb up Trail Ridge Rd. through Rocky Mountain National Park, and for the 20-mile, 3000′ Category 1 climb up Berthoud Pass later in the day.

Perhaps I rode with too much ease. I even unwittingly missed the closing time of the first checkpoint (Mile 34 in Lyons) by five minutes, and then the second, Mile 56 checkpoint by two minutes. At least with the latter—in contrast to the former—an event volunteer was still there to record my name… and to scold me for not making the checkpoints in time.

“The next checkpoint is at Mile 81 and closes at 12:00,” he said with concern. But I had no worries. We were at Mile 56 and it was 7:22 a.m. This meant that there was 4 hours and 38 minutes to ride 25 miles. Granted, it was all uphill on Trail Ridge Road, but that was a generous amount of time especially in comparison to the non-lackadaisical time limits for the first two checkpoints.

Before the ride I predicted that if I started in the second wave, I was bound to catch riders from the first at around Mile 75. Sure enough, like clockwork, I caught up to Paul Grimm at… Mile 75, much like I did in the Colorado Mesa Double Century six weeks ago. Considering I hadn’t seen another double century rider for over six hours up to that point, it was uplifting to see him.

At that point, he had pulled off the road to take a breather of a minute or so. “I’ve been doing a good job keeping the cramps at bay today,” he explained.

“Keep on chugging!” I exhorted, saying that we were nearly at the top of the pass. When I did reach the summit, I had caught the rest of the first wave folks and arrived at the checkpoint with 1 hour and 35 minutes to spare. Time for a long descent.

I felt fine through Granby, Winter Park, and even up Berthoud Pass. I figured the rest of the Wave 2 riders were long gone, so it was a surprise to pass a few going up this climb. At the top—Mile 151—one of the cyclists rolled into the checkpoint muttering about how the ascent had put him into a bit of difficult, except that he described the experience more succinctly and with a little more profanity. (To be precise: “F*** me!”) At least there would be another long descent afterward.

And rain. Initially, it was more like a refreshing mist, but after 18 miles there was enough droplets of H2O falling from the sky and being sprayed by car tires that I pulled over to don a rain jacket and leg warmers. Of course, not long after I did that, it stopped raining.

There were still a couple shorter climbs left—namely, Floyd Hill (Category 3) and Soda Creek (Category 4)—but they felt like kindergarten compared to the two graduate-level passes from earlier in the day. I rode the last 25 miles alongside (but not on) I-70 at a leisurely pace, enjoying the day and riding safely.

I rolled into the start/finish in Golden at 6:30 p.m., or 15.5 hours after I had begun. Considering how conservatively I was riding in darkness and on the descents, I was content with that.

Here is video I took during the event. As you can see, this 200-miler featured a very beautiful course, but it had way more traffic than I would have liked. The route consisted of lots of two- and three-lane highways, after all.

This was part of the Rocky Mountain Cycling Club’s Colorado Triple Crown series of double centuries, and my second for the year. In a few weeks, I intend to ride the last one of them, from Denver to Aspen.