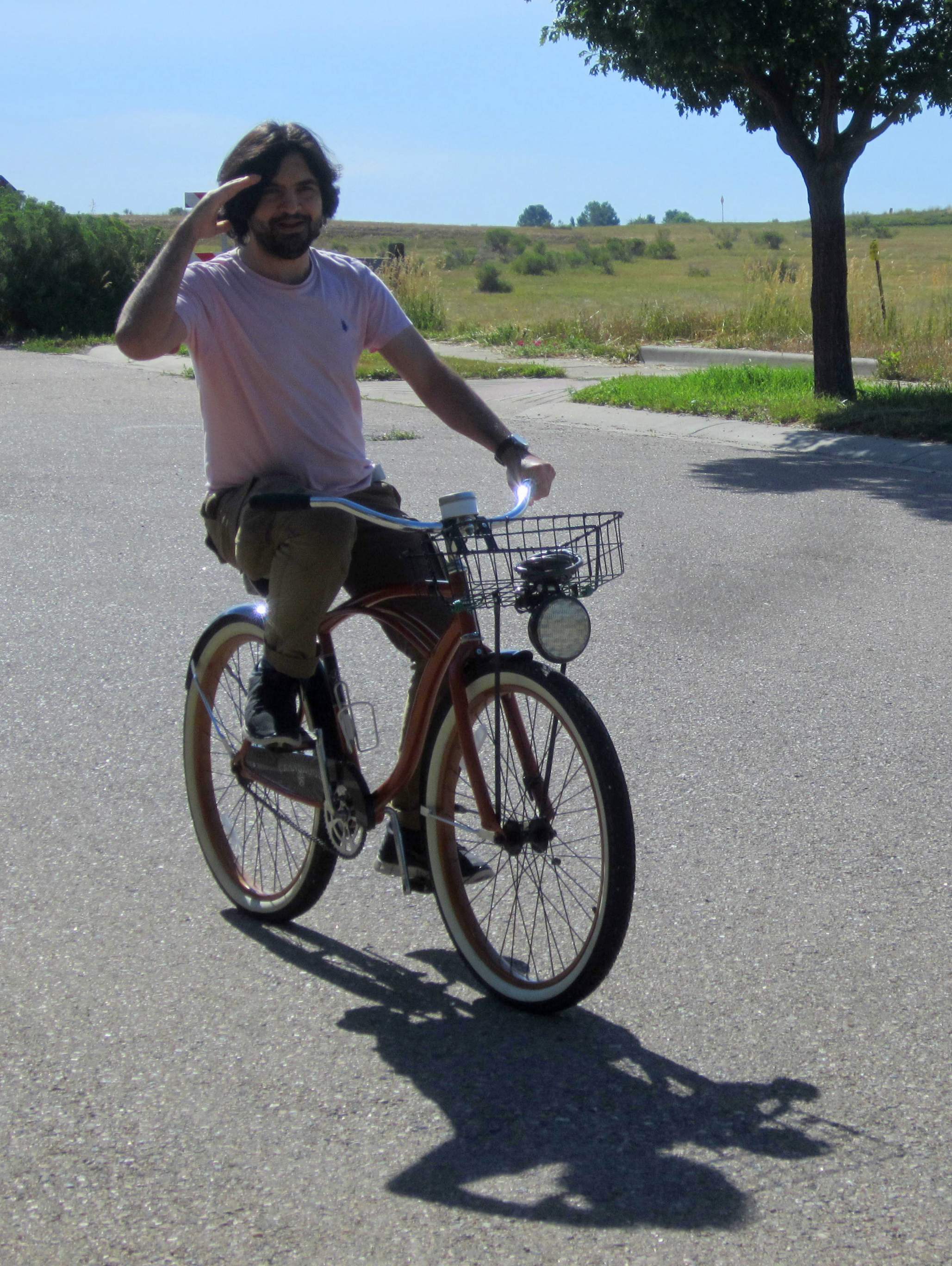 We were at a Spanish conversation meeting, talking about cycling, when Azad casually mentioned something nearly as intriguing as the possibility of extra-terrestrial life, or a sub-two-hour marathon.

“I actually do not know how to ride a bike,” he said in meticulous Spanish that he picked up while living in Puerto Rico for three years.

Our friend E and I looked at each other, then back at Azad. “We are going to have to teach you,” I enthusiastically resolved.

This was a challenge I had already prepared for. Four years ago, when my parents came to visit me in Fort Collins, I tried to teach my dad. Unfortunately, I failed after 45 minutes of trying. My dad said that when he returned home to Stockton, he would practice on the mountain bike I left in his garage using the techniques I showed him. But later, his friends talked him out of it. One hard fall at his age, they reckoned, could handicap him for the rest of his life. Old bones do not heal well. I suppose they had a valid point.

Azad, on the other hand, is still young at 40-something years old. He is also fairly fearless. Earlier this year, E took him flying in a rented Cessna and he absolutely loved it. Successfully riding a bike would add to his list of firsts this year.

We agreed that Azad and E would come to my house during the weekend and start him riding. I boldly predicted we could get him pedaling in under an hour. To prepare and inspire him for the lesson, I forwarded him the following videos I had watched years ago when trying to teach my dad:

I also told him we would start him out on my Huffy Cranbrook. “It has the slackest head angle,” I reasoned, “making it the most stable of my bicycles. At least I have the easiest time riding it no-handed.”

Come Saturday morning, Azad was so eager to begin riding that he mounted the Huffy cruiser before either E or I could think of outfitting him with a helmet. He did request that I raise the saddle because it seemed so low compared to “normal” bikes. I refused, insisting that it stay slammed so he could easily flat-foot the ground.

He started scooting with one foot like the aforementioned videos showed, but the street in front of my house was slightly too steep for a complete newbie to be descending without knowing how to balance or brake. (This was one of the mistakes I made with my dad, I believe.) Therefore, we walked over to a perpendicular street that was perfectly level.

I demonstrated to Azad what I wanted him to do: scoot along with alternating feet, then flex his legs behind him while trying to coast for a few seconds. He promptly ignored my instructions.

Instead, he pushed off with alternate legs for a couple seconds, put his feet on the pedals, and… started riding. He was rather wobbly, but he was staying upright! He even managed to do two U-turns. I shot this video after he completed the second 180-degree bend.

“That’s unbelievable,” you can hear me saying. “I’ve never seen anyone learn how to ride a bike in two minutes.”

Indeed, if I hadn’t tried to “teach” him, Azad may have been successfully riding within 60 seconds. Amazing.

He looked so natural riding that we had to double-check with him that he had never learned how to ride before. He confirmed that while he had tried to learn over 10 years ago with a friend in Iran, he was never successful in riding a bike. “I kept falling,” he said. He also confessed that he was a bit nervous that he was going to fail and look silly today.

He later told us, however, that the Huffy was so comfortably low that he had no fear of falling because he wouldn’t be falling very far. “I could easily put my foot down,” he said.

That, coupled with the slacker head tube angle, makes me wish I had started my dad out on the Huffster instead of my mountain bike. Also, as I mentioned before, I should have started him on level ground instead of a 1% decline. Rather than having gravity propel him, he could slowly scoot along, which might have made him more comfortable.

In any case, we were ecstatic Azad was up and riding so quickly. I even joked with E about what great teachers we were. In fact, we did nothing.

Azad, understandably, was beaming. “Hey chicas!” he exclaimed as two young ladies from the neighborhood walked by. “I’m riding a bicycle for the first time!” They giggled, then congratulated him.

Forty-five minutes afterward, I had Azad try out three of my other bikes (mountain bike, ultra-light carbon fiber road bike, and classic steel road bike). In total, he rode for nearly two hours, only stopping after his first (and only) crash of the day. The tumble occurred on the Gitane with its underpowered brakes, aggressive drop bars and vintage, low-tech components.

His verdict: he liked the mountain bike the most and the classic bike the least. The road bikes made his neck hurt, and he liked the upright position of the MTB. He hated the toe clips and straps on the classic bike, especially since they slapped the ground with each pedal revolution. (I did not even attempt to teach him to insert his shoes into the pedals, as that was a certain recipe for disaster for a neophyte.)

Azad now wants to acquire a bicycle of his own soon. I think a mountain bike is a great option for him—and maybe most recreational riders. You can ride mountain bikes on any terrain with aplomb, and with fewer flat tires. They are usually more comfortable, as their fat, knobby tires and suspension systems dissipate shock orders of magnitude better, and the more upright position results in fewer aches in the back and neck. As I demonstrated in last year’s Fort Collins-Walden 200-mile ride and Round the Rez challenge, a mountain bike can even hold its own speed-wise against road bikes.

I also believe that mountain bikes are safer than road bikes on any terrain. Indeed, if I was riding the mountain bike (or Huffy cruiser) instead of my skinny-tire road bike over cable car tracks during an in-town commute last summer, I am convinced that I would not have crashed and fractured my elbow. The fatter tires increase traction and margin of safety significantly.

Whatever Azad gets, I am very proud of and happy for him for learning how to ride. Success!

You're awesome amigo el jefe Felix! I didn't now you posted this on your website, a friend accidentally found it and sent the link to me! Hilarious! Hahaha! As a matter of fact, you're a great teacher and did the best! You guys let me do my own tries and I believe that 's what a great teacher should do! Thanks again for everything amigo el jefe! You really deserve to be our jefe!

I forwarded your message to Azad! ↩ Reply