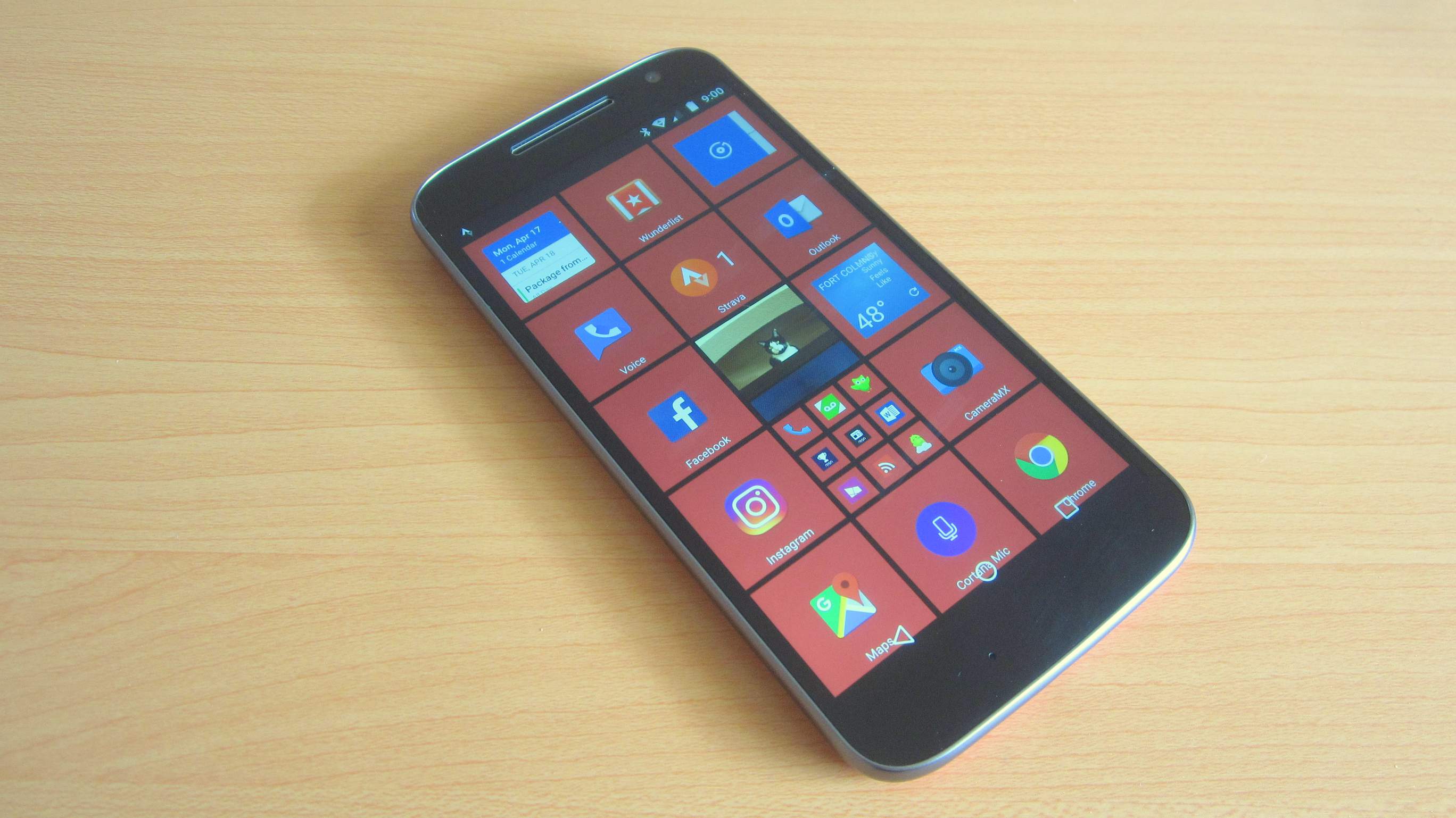 It was the last day of March 2017. I—a Windows phone user and Microsoft fanboy since 2012—received an email from Wharton Brooks, whose enthusiastic CEO made some waves in August last year by claiming that his startup company was going to be “bringing new products and services that will radically change the mobile computing industry” with an upcoming line of Windows phones. Finally, after numerous delays, the design and engineering of their first phone—the Cerulean Moment—was complete.

I was traveling at the time but forwarded the email to my buddy (and Apple-phile) Adam—who had already correctly predicted that there was no way this phone was going to be ready for the 2016 holidays regardless of what the CEO originally promised—for his thoughts.

“Good thing they sent out the email today instead of tomorrow on April Fool’s day,” he replied.

It might as well have been sent out on April 1st. The specifications were twenty yards away from cutting edge, the design was similar to an iPhone 4 (from 2010!), and the price tag was merely reasonable. Worse, this phone was only going to come to market if it obtained crowdfunding of $1.1 million on Indiegogo.com. This phone was basically Dead On Arrival.

And with it was the death knell of Windows phone. For yours truly, anyhow.

Never mind that tech media had already proclaimed that “Windows phone is dead” in numerous headlines over the last two (three?) years. Or that the storied Lumia line of phones by Nokia/Microsoft had sung their swan song with the mid-range Lumia 650 in February 2016. Only a few Windows 10 Mobile devices were still in production: chiefly, the 2016 HP Elite x2 and Alcatel Idol 4s. Zero new Windows phones were announced at Mobile World Congress in January 2017, despite the event in Barcelona being equivalent to Vegas’ gargantuan Interbike expo, but for mobile devices.

Wharton Brooks—even with the absurdity of its claims, its bookstore-like name and no history of successfully developing any physical product—was essentially the Windows phone community’s last hope for a consumer cellular device using its favorite mobile operating system. That hope went quicker than WB’s failed crowdsourcing campaign, which raised only 3% of its funding goal.

Fortunately, I had seen the writing on the wall for quite some time and already had a Plan B in place. Namely: switching to a more popular mobile operating system that retained most of the things I loved about Windows. In fact, since mid-2016, I already had a device waiting in the wings.

Why I Jumped to Android

With the demise of Windows phone, Blackberry OS, Sailfish, Mozilla OS, and all the other at-the-fringe mobile operating systems, the world was left with only two choices: Android and iOS.

Some Windows phone fans migrated to iOS because they can’t stand Google, mainly due to all the data the Mountain View company collects from its users. Many folks were drawn to the user interface consistency of iOS apps and optimization with Apple hardware. Those are valid points to consider.

For me, however, Android won me over due to the following factors:

There are also a few things on, say, my mom’s iPhone that threw me for a loop every time I had to service it. For example, not having a back button, not being able to drag-and-drop files between it and another computer using a USB cable, using a proprietary connector (Lightning) that none of our other devices used, and having a puny battery. It’s also a shame that as of right now (August 2017), no iPhone has rapid charging approaching Qualcomm Quick Charge 3.0 or some of the even faster proprietary fast charging technologies like OnePlus’ Dash Charge.

In 2016, when I started experimenting with Android for something that could eventually become my daily driver, I was looking at devices that were relatively inexpensive (under $220) and had a fairly large screen.

First, I tried a Sony Xperia Z3. I loved its design language, but was disatisfied with its battery life and charging times, so returned it.

Then I picked up a ZTE ZMAX 2, which was an amazing phone for the price ($49). Ultimately, I resold it due to its mediocre camera and lack of gyroscope. (At the time, I was also experimenting with Virtual Reality headset—and a gyroscope is a minimum requirement for Google Cardboard.)

Finally, I settled upon a Moto G4. The reasons:

I wouldn’t say the phone is perfect, but it is very capable as a daily driver in all respects except for low-light photography.

In the future, the top features on my wish list would include dual cameras (with either a wide-angle lens or a lens for artificial bokeh; not sure what I would prefer), better low-light shooting capabilities, USB-C and at least 3 GB of RAM and 32 GB of internal storage. But the Moto G4 should get me through this year with no trouble.

Fortunately, nearly all the apps I used on Windows phone are on Android (and iOS). The main exceptions include Microsoft Edge, Microsoft Maps, and Microsoft Photos, but Google Chrome, Google Maps, and Google Photos serve as good replacements. The main drawback of Google’s services is that there is no synchronizing of data with Microsoft’s services, including bookmarks, browser history, and maps.

One of the main draws of Windows phone was the dynamic Live Tiles that flip to display notifications. To my eye, they are much better looking and more interesting than the sea of static icons that dominate the screens of most Android and iOS devices.

Fortunately, there are Android launchers that mimic the look of Windows Phone 8 or Windows 10 Mobile very closely. The launcher I am using is Square Home, which is entirely free (except for advanced functions I do not need), robust, and highly configurable.

It is a brilliant piece of software. In fact, I would say that “Live Tiles” on Android via Square Home are superior to those on Windows phones for the following reasons:

Square Home does require a lot more time to set up than the authentic Live Tiles in Windows. Also, as close as Square Home gets to the look of genuine Windows, some tiles will look worse—especially if you have to embed an Android widget on the tile to get the same functionality as a genuine Windows tile.

But for me, Square Home looks both good and close enough to Windows phone that I really enjoy using it.

Here’s an extended video, which also shows how Square Home can mimic the Apps List screen of Windows 10 Mobile):

Now that it has entirely conceded the mobile phone market, Microsoft should really consider making an official launcher like Square Home instead of, or in addition to, their Arrow launcher for Android. Many former Windows phone enthusiasts like myself would adopt it!

Nothing was styled quite like the iconic Lumias, but at least the G4’s vertical camera module on the back reminds me of some of the earliest Nokia Windows devices such as my first smartphone, the Lumia 900. (Incidentally, Motos made in 2017 have circular camera bumps, which are reminiscent of the Lumia 830 and 950 XL’s.)

The first thing I did when I got the G4 was order an OEM back cover in red to match my Surface Pro 4. I found one for a few dollars on eBay.

I also added a ring stand. This brilliant mechanism serves multiple purposes: it allows you to hold or carry your phone one handed without fear of dropping it due to butterfingers (I slip the ring onto my index or middle finger), and it acts as a robust kickstand that you can use to prop up the phone in either landscape or portrait mode. It looks far more elegant than the über-popular PopSockets that a climbing partner of one of my best friends invented and sold millions of. Most ring stands have a square or rectangular base, but the round ones look better to my eye.

After these modifications, the Moto G4 looks like a good companion to the Surface Pro 4, yes?

It certainly matches the SP4 better than the Lumia 640 XL did.

Comparison of Windows Phone vs. Android

When I first adopted Windows phone, it had a few key advantages over Android and iOS. HERE Maps—then exclusive to Nokia Lumias—had downloadable offline maps that turned the phone into a standalone GPS device long before Google Maps had that functionality. It was invaluable during my 2013 Europe trip.

Microsoft Office for Mobile was another Windows phone exclusive. So were hubs (the aggregation of data from third parties like Facebook), Kid’s Corner, large and beautiful typeface dubbed “Metro,” and, of course, Live Tiles. The flagship Lumia phones also took the best photos.

All those advantages are gone. There are still a few things Windows phones have a leg up on Android as listed below, but only slightly. Meanwhile, Android has significant advantages in many areas.

The list includes apps and features a Microsoft fan may typically use.

*Likely to be dealbreakers for many folks

In summary, most of the Microsoft apps still work slightly better on Windows 10 Mobile. But they still work very well on Android for the most part.

For all other apps, there is virtually no comparison—they work better on Android, even if they are available for Windows 10 Mobile.

What I Really Liked About Switching to Android

There was an adjustment period in which I still prefered Windows 10 Mobile for many of the reasons listed in the chart above.

Ultimately, though, I have grown to really like Android. It brought the following benefits:

The End of My Microsoft Fanboyism

Having supplanted the Microsoft Band 2, xBox 360, and Lumia 640 XL with a Garmin Forerunner 35, Chromecast, and Moto G4 this year probably indicates that my fanaticism for Microsoft hardware is over.

I still have—and really like—a Surface Pro 4, along with a Microsoft keyboard and mouse for my desktop workstation computer. But my future replacement for the SP4 will probably not be Microsoft branded considering how unrepairable and expensive Surface products are (score of 1/10 by iFixIt.com for something as basic as replacing an inevitably degrading battery). Manufacturers such as HP and Dell have also really stepped up their game, so Microsoft is not the only PC company that makes drool-worthy alternatives to Apple products.

I’m still a big fan of Microsoft software (except for the mess that is Skype). Not only are their core products ubiquitous and available for all platforms, but the company has gone a long way to make sure that, for example, Androids and iPhones work well with Windows 10 PCs. For example, PCs receive timely smartphone notifications, and it’s really easy to resume working on an Office document on smartphone or computer.

But even on the software front, I am starting to diversify a bit. I now rent streaming movies on YouTube instead of from the Windows Store, and use Google Play Music instead of Microsoft Groove on the Moto.

One day I might even migrate photos to Google Photos as Adam did. I’m happy with storing photos on OneDrive, but Google Photos’ Android integration, free unlimited cloud storage, and face recognition capabilities are enticing.

That’s another good thing about switching over to Android for smartphone: I have my feet in the world’s two most ubiquitous operating systems for mobile and for PC now. I can reap the benefits of both.

How I Repurposed the Windows Phone

How My Windroid Phone Looks Today