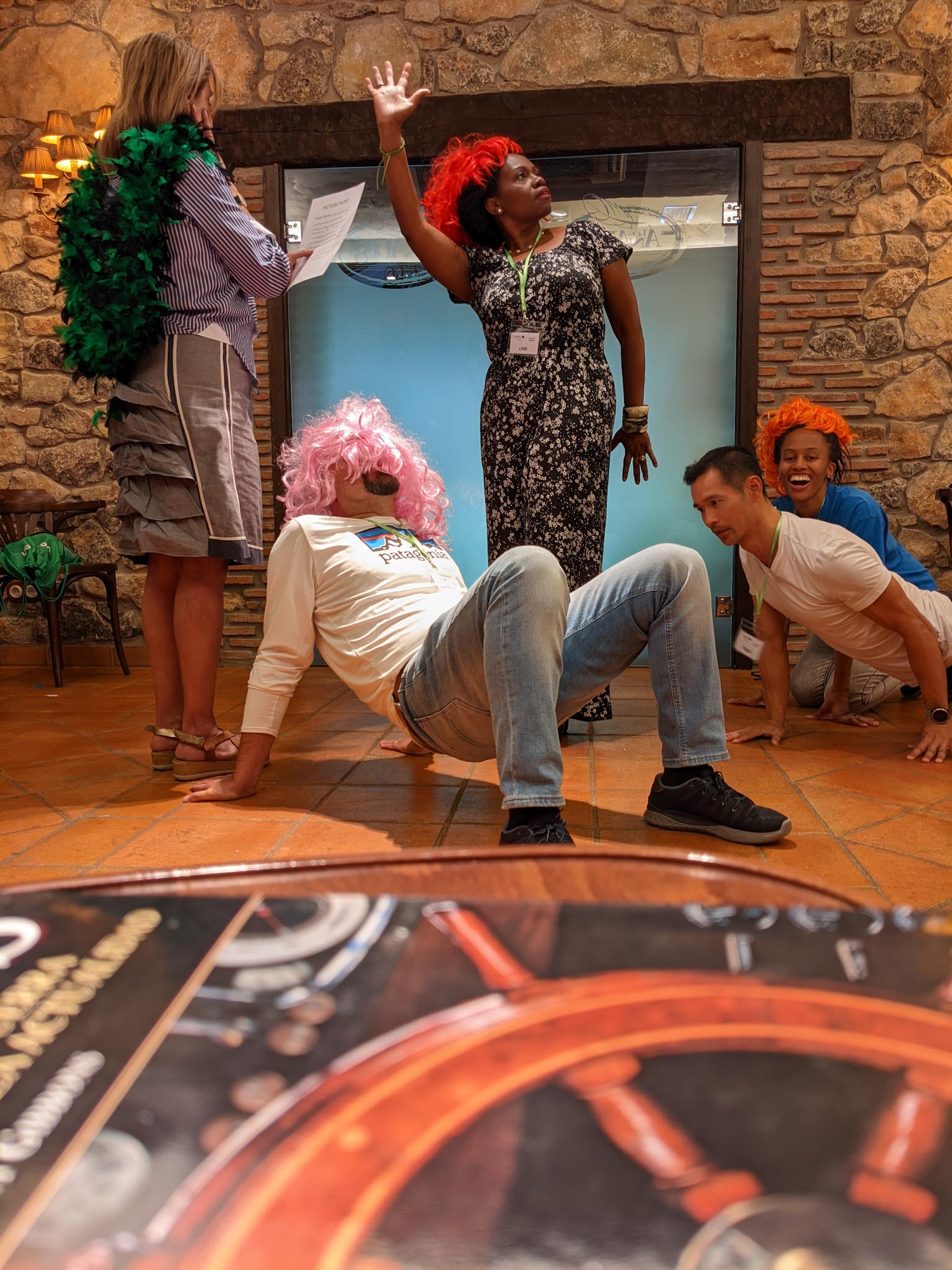 I enjoyed volunteering at VaughanTown so much the first two times that I applied to participate again this year. VaughanTown is a six-day English immersion program for Spanish adults who pay a lot of money to enroll. Volunteers are needed to converse with them for up to 14 hours a day. In exchange for their time, the volunteers get to stay in a resort-like location, are fed mouth-watering meals, and have stimulating interactions with Spaniards.

Much like in 2013, the programs I applied for were already full and I was put on a waiting list. But in early August, I received the following message.

“Just getting in touch here as looks like we now have an extra spot going on our upcoming Ánades program. Might you be available?”

It was only 12 days out, but as I live in Spain, all I had to do was take a four-hour train or one-hour flight down to Madrid. My wonderful girlfriend gave me her blessing, and I spent a week in one of VaughanTown’s more remote locations.

The town was named Abánades. But the program was named Ánades after the hotel that everyone stayed at.

Unlike last year, VaughanTown was not hindered by COVID-19 restrictions. The organizers requested that we take an at-home COVID test within 24-hours of the program and sign a statement attesting that we would do so, but that was it. There were no temperature checks and everyone only had to wear a mask on the bus between Madrid and Abánades.

This location reminded me a lot of VaughanTown Valdelavilla in August 2013. Valdelavilla had a population of 30; Abánades was said to have 40 residents. Both sites were situated at about 1000 meters in altitude and surrounded by mountains. The towns were rustic; for example, other than the hotel, Abánades had only one bar.

Even the schedule was the same, as follows:

Some of the group activities included a debate workshop, a “guess the lie” game, and trivia night.

From the VaughanTown staff, there was Fernando, the MC, and Diana, the program director. Both did a great job.

The staff at Hotel Ánades also played an essential role at VaughanTown. Not only did they prepare gorgeously presented meals, but one of the employees led a one-hour Chi Kung session outside.

Of the volunteers, we had two people from England, a couple from Scotland, one person from the Philippines, and woman from New Zealand. Two folks from the United States if you include me (I live in Spain now). All spoke English as their first language.

There were 12 students, and most were from Madrid. Two were from Barcelona, and another was from Valladolid. Among them were teachers, an architect, a chemist, and someone who worked at a company that sold beer-dispensing machines.

The latter was named Cristóbol. We had the following conversation during our one-on-one on the second day.

Cristóbol: “Córdoba, but now I live in Seville.”

Me: “One of my best friends in Colorado is from Córdoba.”

Me: “My friend Manuel went to Colorado for school and still lives there.”

Me: “Wait… what did you say? My friend’s name is Manuel [same last name]!”

It turned out that Cristóbol went to university in Córdoba with Manuel nine years ago and are still friends on social media. The Spanish have the saying el mundo es un pañuelo (literally, “the world is a handkerchief”), roughly translating to “we live in a small world.” This was one of the biggest small-world coincidences I have ever had.

Once again, I had a delightful time chatting with the Spaniards and Anglos. Not only did I learn more about Spain in Spanish culture, I learned some British and New Zealand English as well. As a bonus, all volunteers were offered an hour of solo spa time at the hotel. The spa facilities included a jacuzzi, wet and dry saunas, and relaxing music.

The program was very well organized. There were only a few quibbles about the location. For instance, there was one morning that the Internet went out. Some people complained that the water supply intermittently stopped when they were taking a shower. Presumably due to the limited number and expense of the rooms, volunteers had to share a bedroom with another. The sleeping quarters were sometimes very hot, especially the attic that I shared with a volunteer from the UK named Ian.

There were loud, fake church bells that curiously rang three minutes before every hour. I wrote “fake” because they were unquestionably digital and emanated from a loudspeaker instead of bells. The first two nights, they woke me up several times.

Monday, August 15, was a Spanish holiday called la Asunción de la Virgen, or the assumption of Mary. Accordingly, there were festivities in town including a bicycle tour, mechanical bull riding, and fiestas.

There was also a birthday party at the park next to the house I was staying in. For such a small town, there was a surprising amount of activity.

There were also several accidents. One volunteer got stung by a wasp. Two students fell during their one-on-one hikes and at least one of them had her palm scraped up.

The most serious incident, however, happened during siesta time. A volunteer borrowed a mountain bike from the hotel, fell, and got very bruised. She was afraid she had broken her jaw, so Mayte, the hotel manager, drove her to the nearest hospital, 70 kilometers away in Guadalajara. Diana, the program director, went with them to help with translation. Fortunately, it turned out that the volunteer had no broken bones, just large bruises, a black eye, and a swollen hip.

Despite the bit of adversity, everyone had a good experience. I sure did and I expect to volunteer at VaughanTown again sometime in the coming years.