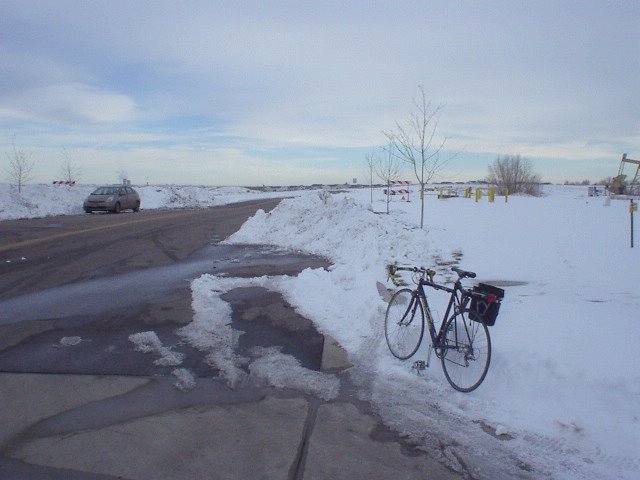 I had just helped dig out a lady’s stuck-in-the-snow Ford Fiesta about 40 feet down the road from my house when I came to a certain realization:

Even though the City of Fort Collins did a good job in plowing the main arteries within 12 hours of the end of the Colorado Blizzard of 2006—including neighborhood roads within 200 feet of my house—I could potentially have a heck of a time getting to those plowed roads, such as the one shown in the photo above, in my little sports cars.

After all, if a front wheel drive, skinny-tired Ford Fiesta could barely do it, how were my rear wheel drive vehicles with even less ground clearance going to? With the increasingly deeper ruts being dug in the snow by neighbors’ 4x4s, the road in front of my home was becoming more like the Rubicon Trail instead of a shimmering path of runway that motorists had longed for.

So was I virtually trapped? How was I going to, say, get food? Should I begin rationing the edibles in the cupboards? Hold a food drive in the area proclaiming, “Save your neighbor—please don’t let him starve?”

I suppose one viable idea would be to become the ultimate recluse by ordering groceries online and never leaving the house. But then I’d go crazy. To be limited in one’s mobility is losing one of modern civilizations’ greatest freedoms, which is to go wherever one wants, whenever he wants, including right now.

Fortunately, there was a better, simpler solution. The bicycle!

So on Thursday I rolled out rolled out Carrie—a.k.a. the Ultimate Commuter Bike 2.0—from the garage, hoisted her over my shoulder, and trudged along the snow-packed road for a couple of minutes until I got to the nearest plowed road. Success! Well, almost—there was still the matter of riding along wet roads and through some patches of snow and ice en route to the grocery store.

Last week I had just shod Carrie with solid Air Free Tires and was extremely interested in seeing how they’d fare in cold and wet riding conditions. Here was my chance. Happily, I have mostly good things to report—they performed well on water-slick roads and okay through not-so-deep (e.g., less than one inch) snow and slushy ice. Predictably, their performance on solid ice was terrifying. All-in-all I’d say their performance was absolutely no different from regular (pneumatic) tires—no better, no worse.

Fortunately, I was mostly able to avoid riding through ice (my European Reevu helmet was instrumental in helping me make sure no cars were coming up from behind as I went around ice patches), and the times I couldn’t, I managed to keep my balance and stay upright. Here’s something I learned rather quickly when riding through ice: do not pedal (the rear wheel will just spin, sometimes sideways) and stay relaxed even as you get ready to put a foot down just in case. I once rode though a 50-foot stretch of ice this way, and though some bumps caused some sideways skids, I managed to stay upright and rolling mostly forward.

The weather—though slightly overcast and below 30 degrees Fahrenheit—seemed very comfortable. The complete lack of humidity in Northern Colorado helped.

Within about 20 minutes (4.5 miles), I was at Albertson’s. Carrie had the bike rack all to herself, in the snow. I quickly locked her up and went inside the grocery store.

Being inside Albertson’s was surreal. Many shoppers were here—no surprise considering that X-mas was just days away and most stores were closed the day before due to the blizzard—and it was obvious that many food delivery trucks were not able to get here in the last few days. Three-quarters of the vast bread shelves were completely empty and there were several aisles of fruit entirely bare. Most everything else was in stock, though—we would not starve today!

I rode back home with a wide grin on my face. Blizzard, schmizzard… so what if my cars would be immobile for awhile? Here I was riding on Fort Collins excellent bicycle-friendly roads while getting exercise, breathing clean fresh air, and delighting in the white winter wonderland that was now Northern Colorado. With a bicycle there is no chance of getting stuck because if road conditions get too dicey, one can just dismount and walk or carry the bike along.

Indeed, the next day, two more of my neighbors—one in a Mercury Cougar and another in a Volkswagen Passat—also got stuck 40 feet down the street. After they got unstuck, they tried to smoothen out the snowy road a little more. I would have helped but I had to get to my friend Ryan’s place in Laporte 8.8 miles away by noon to help her move stuff. Naturally, I once again took the bike.

Who would have thought that a skinny 20-lb. two-wheeled object powered by about 1/4 horsepower be able to go to mundane places that 2600-lb 120-hp motorized vehicles could not?

I know from first hand experience that getting stuck in the snow can be awful. Here are a few good tips I have come to learn about that are very useful. For starters, even though it may sound odd one of the best things you can do is keep a big bag of kitty litter in your trunk. If you ever find yourself stuck in a snow or ice rut, dig out a good portion of the snow from around your tires and pour kitty litter all around. This will help to give your tires traction when trying to move back and forth to free your car. Another good remedy is to use a commercial De-Icer product. They are made to instantly melt ice and snow from off of your car's windshield and mirrors, but you can also apply it directly to the snowy area around your tires to help melt any excess ice. Those two tips are very helpful, but they can also be limited. If you find yourself REALLY stuck, the best bet may be to use a winch to pull your car out. They typically aren't that expensive, and will more than likely pay for itself the first time you successfuly get your car out of a snow bank. Most hardware stores carry them or you could always search online. Here's a good article (wwwdealsdepot.com.au/a37/Introduction-to-Winches/article_info.html) that goes over the basics of what to look for and how to use them. Hopefully this helps, and even if you don't decide to get a winch, the kitty litter and de-icers certainly won't hurt. And they are pretty inexpensive to boot. I hope that helps. ↩ Reply