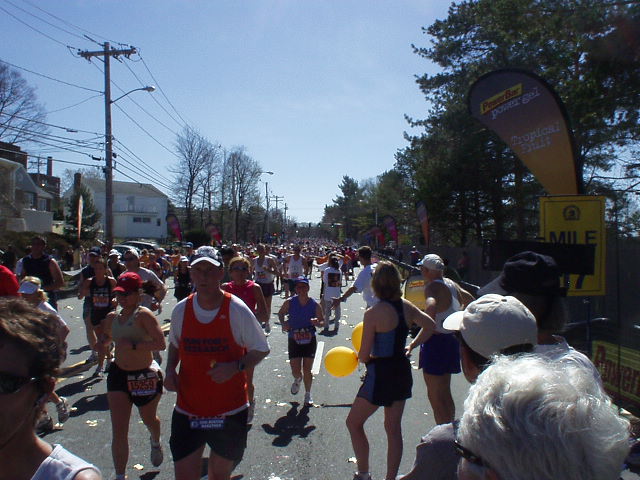 The Boston Marathon is the world’s oldest annual marathon, and one of the most prestigious. Its storied history makes it a must-do for most running enthusiasts and is considered the Mecca for Marathoners.

Unfortunately, a basic problem is one needs to qualify for Boston by running a fast-enough marathon, which less than 10% of all marathon lovers are currently capable of doing. So how to do so?

I feel qualified to answer this question, having went from running five-hour marathons as recently as 2002 to running a 3:03:24 marathon in 2007. In between, I achieved different milestones ranging from finally beating George W. Bush’s best time of 3:44:52, to running a sub-3:30 marathon, to halving my time deficit to Boston each year since 2005. (See complete race log.) This may not have been the quickest progression, but it was a steady one, one that was absolutely injury free and did not require running everyday.

Below are strategies I found effective. Also, see my article in Colorado Runner Magazine on how NOT to train for a fast marathon.

Good luck! And if you qualify in time for the 2008 Boston Marathon, leave a comment below. I’ve already signed up, and maybe we could meet!

I ran my first marathon this past May (Delaware marathon). I just wanted to see if I could do it before I got too old to run one. I started reading about the Boston Qualifiers and saw that the Delaware was a BQ. The time didn't look outlandishly fast to me, so I set a goal to do that. I am 53 years old. I qualified... barely... I damn near killed myself trying. I entered the Boston because I know it's the opportunity of a life time, and I don't know if I have the ability to ever qualify again. I will be there on April 21! ↩Reply

Thanks for the info! I'm trying hard to qualify for Boston, but am not there yet. I ran the Austin Half in 1:45, but need a 3:35 Full. Do you know if stats are kept as to the fastest 2-3 qualifiers? Chicago didn't seem so fast to me (4:21 in the heat). I heard Disney is also good. I also run with extra shoe padding, and worry about injury if I use those light non-padded shoes. Thanks! ↩Reply

Thanks, Clyde, for stopping by my website and for your comment. From my understanding, these are the fastest Boston Qualifiers, in roughly this order:

The first four all have significant net elevation loss. CIM and Chicago are flat, but as you know first hand, Chicago is difficult if it's 90 degrees outside. (That said, when I did it in 2006, it was a bit too cold -- <39 degrees the entire time).

Regarding unpadded, ultra-light shoes, perhaps this would encourage you to give them a shot: "Kick Off Your Shoes and Run Awhile" (NY Times).

Hi Felix, I agree with so much of what you say! Thanks for sharing. In my late 20s and early 30s, I ran 5 marathons and all but my very first were 3:10 and better... I slipped under 3 hours one time.

Never went to Boston! Got kinda cocky and figured I'd easily qualify again. I couldn't have been more mistaken. We have to respect the distance.

In the years since then, my running has been on again, off again. I've had about half a dozen fairly slow marathons but 3 times I have come in under 3:40.

Thanks again for encouraging the chatter! Hopefully you'll decide to do Boston in 2009 and we can meet then!

I haven't been running very long. I have done 2 marathons. The first in NYC, I really didn't train or know what to expect and finished in 4 hours. My second marathon I finished in 3:33 and ran with a girl from the running club I joined. I finished feeling pretty good and I think I had a lot more in me. The girl I ran with qualified for Boston, now I need to make an attempt at it. I found your website while doing searches on the Boston marathon. I have been trying to hit the times you posted, as I need 3:10 to qualify.

The Texas heat can be brutal in the summer. So far I have hit 19:29 on a 5k race. I have been doing speedwork most of the summer, but I am limited to about 1 hour in the morning and running on the treadmill on my 1 hour lunch. The wife and I just had our first kid, so training, especially 5 days a week has been tough on limited sleep.

I got the marathon bug now, so no sense in loosing my conditioning, I just have to adapt to running when I can. Anyway I registered yesterday for San Antonio Rock and Roll, inagural race. They are advertising flat and fast. I have been doing the Higdon advanced for 2 weeks now, so far so good.

Thanks for Sharing your information.

Weather in St. George started out very windy and cold but ended up cooperating with steady rain most of the run. The last 6 miles being downhill is a huge advantage. I have always been completely exhausted in San Diego and D.C. but I actually enjoyed St. George at the end. Yeah, I was sore, that's for sure. As far as training for the hills (down and up) I really didn't do it. I'm sure that's why I was so sore! I followed Runner' World, Run Less, Run Faster by Bill Pierce, Scott Murr, and Ray Moss for a 3:50 qualifier and am happy to say, "It worked!" I'm going to Boston!

Thanks for sharing! Hope to see you on the 20th!

Felix, thanks for your advice and encouragement. I ran the Disney in 3:57 and will try again with the Colorado and the St George. Boston, here we come! ↩Reply

I have found two races that helped me qualify for Boston. The Delaware marathon was my first qualifier inMay 2007. I ran a 3:34 to qualify for men aged 50-54. I the ran 2008 Boston. I definitely want to go back. This past November I ran the Philadelphia marathon in 3:39. Tis is good enough to qualify me for 2010 Boston because I will turn 55 before race day. Both these courses are flat and fast. I will definitely be there in April of 2010. ↩Reply

My first real attempt to Boston Qualifying @ San Antonio didn't go so well. I finished in 3:16:03, short of my needed 3:10. The course was pretty fast, but the temperature and mother nature did not cooperate. My second attempt was yesterday @ Mardi Gras marathon. I finished in 3:07:38, and finally BQ'd! The weather was perfect yesterday, the course was flat as advertised, this is definetely a recommended course to get your BQ or a PR. Felix, thanks for your postings, which served as a blue print for me when I started my training this summer. Congrats to all who made it in this year and good luck to all of you as you proceed with your quest to Boston qualify. ↩Reply

a) get your weight down, and then a few pounds

e) Run with a pace team.

I just ran my first marathon, the Hartford Marathon, hoping to run it in 3:10 (7:15 per mile) and qualify for the BM. Even though the website said there would be, there was no pace runner for 3:10!!! I had no watch and so stuck with someone who did.... ended up running my first 10 miles in 1:08 (6:48 per mile) and then slowly died. I walked 5 of the last 7 miles. In the end I finished my first marathon at 3:59. I could barely walk for 5 days but now feel stronger than ever.

I really really want to qualify for 2011 BM and so signed up for the marathon in hamilton, on, canada near niagara falls. It's the only one I could find that's still open and within a day's drive. Perhaps I'll wear a watch. Anyone have advice or a recommendation (ie splits, etc)? Try for 7:10/mile in the beginning? Wish me luck! ↩Reply