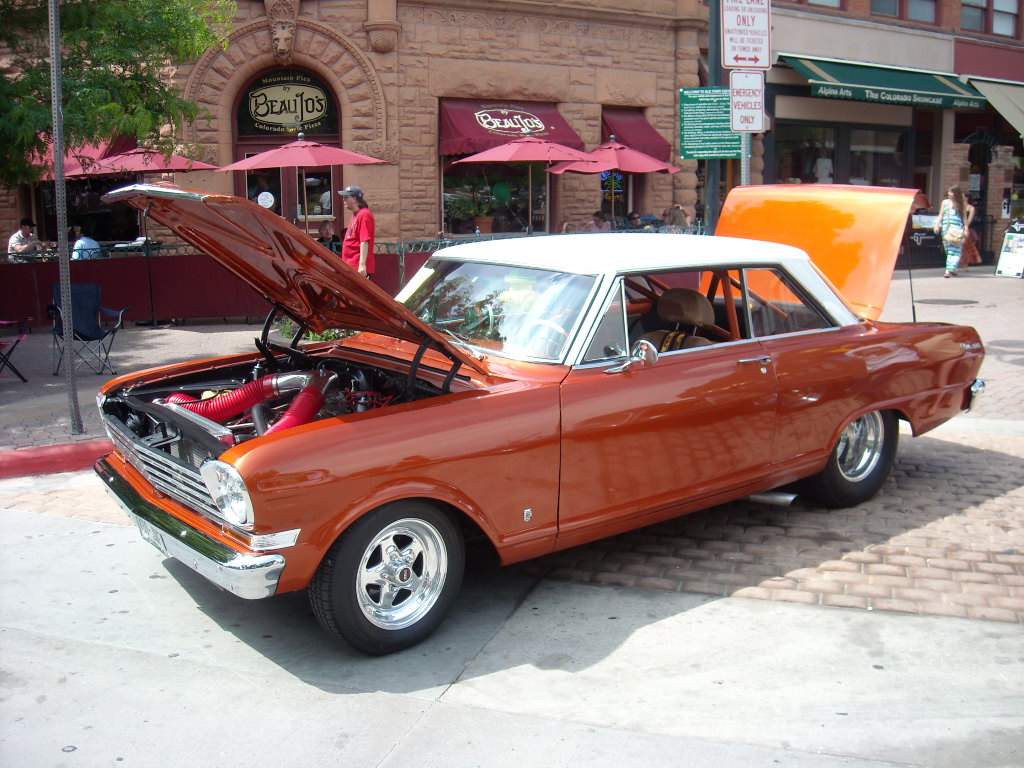 There is one weekend each year when downtown Fort Collins turns into a virtual movie set for American Graffiti—the second Saturday of June when the Old Town Car Show takes place. Notwithstanding the economic recession and recent Seattle-like weather, hundreds of glimmering cars and trucks from decades past stood proud with chrome and lacquer seemingly a foot deep, eager to be admired and, in one or two cases where permissible, touched.

As if oblivious to the Big Three’s (particularly Chrysler and GM’s) current financial and sales crises, the event featured almost exclusively cars from Motown and may as well been a tribute to Detroit’s finer years. Of particular interest to me was the first generation Chevrolet Nova (or Chevy II or Chevy 400 in some Latin American markets where “no va” implied “no go”) because a dear friend recently claimed it as her dream car, having fond memories of owning one in high school. Then I went on a rather futile search for European iron, discovering only a 70s Fiat Spider, a 1973 MGB roadster, and a cute 50s Hillman three-door wagon.

This year (after the Run for a Child’s Sake 5k) I managed to drag my friend Raquel along and it’s good there were lots of gorgeous machines around to keep her interested enough to not mind my endless spouting of automotive trivia and anecdotes. Unfortunately, I forgot to ask her what was her favorite car of the show. I think mine was a 60s Mustang fastback but that should not be a surprise given how much I’ve become enamored with America’s pony car since doing the New England driving tour last year. Another fave was a 50s Ford Thunderbird convertible much like the one Suzanne Somers drove during a 30-second cameo in American Graffiti.

Rats! I had no idea you were a car nut...as I am. Grew up with every imaginable GM product (Dad was a design engineer at the Proving Grounds '58 to '68), plus gobs of Full Classic Cars. I wish I was more of a mechanic/engineer!! I've got the basics down, but that's it. I got to the FC car show about 3:00 - just after several cars had pulled out due to the threatening weather. Had a nice walk-about and enjoyed what was left. Got a kick out of the guys driving the Shelby around taking down the road barriers at the end!

I'll be at the Michigan Grand Classic this summer - haven't been able to attend one in a long time and I'm looking forward to it! http://www.classiccarclub.org/grand_classics/what_is_grand_classic.html ↩ Reply