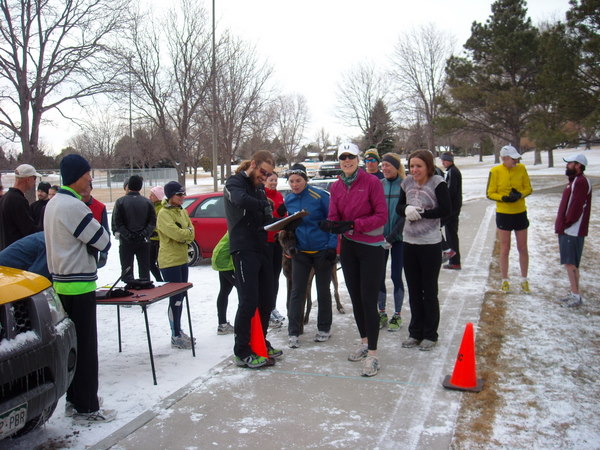 I had only arrived at Edora Park for a few moments when the first batch of people started to give me a gentle ribbing about my 8:43-pace-for-a-2.5-mile-race performance disaster in the last Tortoise and Hare race. Surely, I would do a little better today?

“Yes, I am here to redeem myself,” I replied. While running faster than eight-minute-per-mile pace was a near-certainty now that a few weeks in the clean Colorado air had given my lungs the chance to clear out the remainder of Guatemalan pollutants, I was hoping to get back down to mid- or high-six-minute miles.

My “training” of late has only been about 7 miles/week, so I started out conservatively. “Conservatively” meant 6:30/mile pace which actually seemed pretty easy, and for the first 2.5 miles I was feeling decent.

The second half, however, was a bit less encouraging. My lack of any sort of endurance training in the last few months manifested itself here in the form of legs that were already starting to feel The Burn. I kept looking down at my Garmin and it was registering an instantaneous 7:00 or 7:10 pace. Boooo. My stride length was surely shorter than in the first half, but I think the main difference (versus races I’ve run well in the past) was that my leg turnover was not as rapid.

At least I was actually passing people due to having an earlier-than-usual start time as dictated by the computer that factored in my “it’s like he gained 50 pounds” performance from the last race. (The Tortoise and Hare races are “handicapped,” with the quickest people starting last.) And I was able to pick up the pace in the final quarter-mile.