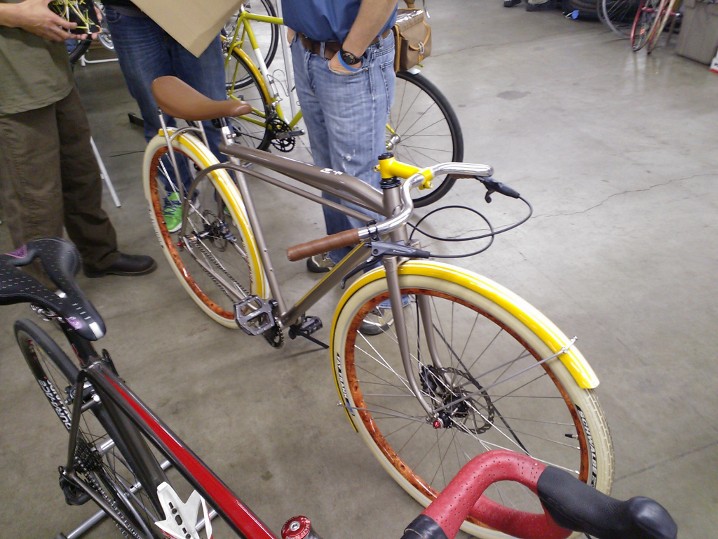 The show, as usual, was at the National Western Complex, a large venue that not only hosts equine exchanges but also eight-hour Professional Engineering exams. It did seem like their were more booths and previous years—certainly more by manufacturers and bicycle shops.

The most innovative corner at VeloSwap seemed to be courtesy of my hometown. The defacto Fort Collins area was represented by Big Shot Bikes, maker of colorful and customizable fixed gear road bikes; RideKick, maker of electric bicycle trailers that push your bike; and Kelly’s Trunk Locks.

Kelly’s booth was generating a bit of interest when I was over there talking with her, and she sold a few in the first hour alone. I alluded to that by loudly saying, “These are going quick!” prompting one guy who was hesitating to immediatly fork over some cash in exchange for one.

“I think you pushed him over the edge,” Kelly said shortly after he left.

Another Fort Collins outfit was YipSAN Bicycles. Renold Yip is the owner and he lovingly hand-crafts lugged steel custom bicycles under his brand. I had met Renold and his wife Leigh at De Klassieke Ronde—and also at the With My Own Two Wheels showing earlier in the year with Kelly—so it was great to see both of them here.

In fact, my favorite bicycle at the entire event was this one that Renold created, replete with wood-look wheels, shown at the top of this page.

Leigh told me a story about how Renold found the banana seat out East, re-covered it and made it a sweet part of this bike. The most interesting bicycles, it seems, always have a story behind them.

Elsewhere in the building was Braap bars, another product created by Fort Collinsers (my friends Todd and Shauna). Made from strictly organic foods, the taste of these energy bars seemed to have greatly improved since I last purchased one a couple years ago from a local Schrader Country convenience store.

I ended up leaving the event not with any big purchases and a bunch of free samples, but the road trip ended up being well worth it.