When I arrived in Pittsburg, Kansas during the 2015 Trans Am Bike Race, I had biked 2,700 miles in 13 days. This was enough to catch up to all the leaders of the race except for one (Jesse Carlsson, the eventual winner), and the plan was to keep up the miles, stay disciplined, and race ahead. The last few days I felt I was being extremely effective in the aerobars, and even climbing well once the course started undulating a little east of Newton, Kansas.

But it was the morning after Pittsburg that I started to notice an odd problem: when I was in the aerobars, I could no longer see the road as easily as in the last few days. I couldn’t lift my head quite high enough and had to roll my eyeballs up as high as possible, which was uncomfortable. What I didn’t realize at the time was I was experiencing the onset of Shermer’s Neck. That morning after Pittsburg would the last time I’d be able to use the aerobars at all.

The Progression of Shermer’s Neck

According to this article on Active.com about Shermer’s Neck, the symptoms hit ultra-distance cyclists suddenly, with little warning. “It is not a gradual ailment,” states the article. “After first feeling the symptoms, the neck will usually give out within two hours.”

That was not true in my case—Shermer’s Neck came on by degrees. When I first started noticing I was not able to see the road very well in the aerobars, I switched to the hoods. I rode the hoods for many hours, I think, until sometime later that day or evening, I had to switch to the bar tops. When I got a motel in Houston, Missouri, at around 11:30 p.m. that night, I had ridden 179 miles. I was disappointed with that mileage considering I had ridden 260, 275, and 200 miles the preceding days, but considering how hilly and hot the Ozark Hills were and my late (7:00 a.m., I think) start, this was actually a decent distance.

It was the next morning that my neck was screaming in pain. Faced with more of the Ozark Hills and 90-degree heat, I struggled to make it to Summersville, Missouri. When I did, I had to take a prolonged break. My neck had completely given out. At a gas station stop, I rested for two hours while icing the neck, refueling and discussing the neck problem with the sympathetic shop owner named Deanna and her family, all while seeing racers Adrian O’Sullivan and Donccha Cuttriss pass by outside the window. I had been far behind them for the first 12.5 days and was only ahead for 1, and now I was behind again. It was the last time I would see them.

I ended up only covering 68 miles that day due to stopping at a motel in Ellington and icing and sleeping for 12 hours. No longer was I focused on catching the leading riders. Now I was concerned about being able to finish the race at all. There were still 1200 miles to go.

With my hands placed on the arm rests of the aerobars, I was able to see the road, if barely. That enabled me to ride 200 and 170 miles the next couple days—the latter in what I’d term limp mode. This gave me encouragement that I could make it to the end with the bum neck while doing ok mileage. However, Shermer’s neck continued to get worse.

During a stretches of road after Utica, Kentucky, I was riding like an open-water swimmer: head down most of the time but bobbing the head up every so often to glance at what was ahead. Obviously, this was not very safe. Eventually I had to come up with a better solution. I thought about how I could give myself a hand position to allow my body to sit upright, as even riding with my hands on the top of the aerobar armrests was still too much of an aggressive position for Shermer’s neck. There was no way I could raise the handlebars due to the threadless headset, and a bike shop was nowhere around to sell me an adjustable stem. I briefly considered rotating the handlebars 180 degrees so the bar drops would be higher and facing towards me, but decided against it since that would only give an addition four or five inches of height, plus it would negate the use of the bar-end mirror—which I needed now more than ever to look behind me because I could no longer turn my head.

Ultimately, I decided to try rotating the aerobars 90 degrees so they would be vertical: 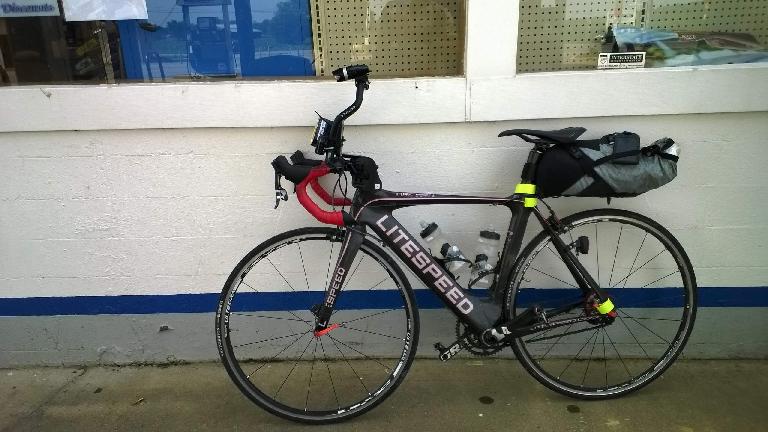 How did this work? Initially, brilliantly. In fact, after riding for 20 miles with my hands on the top of the aerobars, I tweeted:

Vertical aerobars worked! Totally unaero and like cruiser but comfy & can see the road. Smile on face whole last hour

This enabled me to ride 140 miles and 169 miles on Days 18 and 19, but Shermer’s Neck was still severely affecting my riding. During subsequent days it seemed to affect me worse. The limitations it imposed included:

You can easily see, then, how Shermer’s Neck was single-handedly responsible for the severe drop-off in daily mileage that last week of riding.

What could have been some other solutions, then? One I tried on the final night of the race was using a neck brace, which I picked up at a CVS Pharmacy with 90 miles to go. I tried to position it so that it would push up my head, but it wasn’t effective. Despite using it at night, all it did was cause overheating. I discarded it after 40 miles.

Another was using my left fist to prop up my head while riding. I actually did this a lot the last two days because even while riding with my hands on the vertical handlebars and sitting upright, I was starting to have some problems seeing the road towards the end!

Other solutions I read about included:

I didn’t bother to try such solutions, either deeming them too impractical or inconvenient. Also note that no Trans Am Bike Race cyclists were allowed to have crews, and setting such systems up by myself would have been difficult with hand and other injuries.

Oh well. While I was disappointed that Shermer’s Neck prevented me from being competitive during the last thousand miles of the race, I am happy and relieved it ultimately did not prevent me from finishing. I still managed to arrive at the end in Yorktown in 8th place, mainly losing one otherwise likely position to Paul Spencer, who caught and passed me in Christiansburg, Virginia, with 368 miles to go. I also finished only about two days after my goal time and one day beyond my predicted time.

The following may be reasonable theories as to why I got Shermer’s Neck when I did.

No one knows what specifically causes Shermer’s Neck for sure aside from “excessive cycling.” But I will go ahead and suggest the following to prevent it:

Update June 2016: I have encountered a compelling article about how RAAM crew member and Licensed Massage Therapist (LMT), Sue Morris, came up with a successful treatment and prevention plan for racers who had experienced Shermer’s Neck in previous RAAMs. It entailed massage therapy for knots in two front neck muscles—sternocleidomastoid or SCM and scalenes—before and during the race. Her recommendation is for ultra-cyclists who have experienced any sort of neck trouble in the past to have an LMT do massage on these neck muscles two or three times a week six months before the race, and to have a LMT as part of the crew during the race.

Of course, in the Trans Am Bike Race there are no crews. Massage two or three times a month for six months also gets awfully expensive. Therefore, it is probably best to learn how to do self-massage of the SCM and scalene muscles, maybe using the thumbs or some sort of handheld massage ball.

I have a Dynaflex massage ball roller that I am going to experiment with. It is small enough for bikepacking and weighs 130 grams (4.5 ounces).

A full night’s sleep will not heal Shermer’s Neck. But the Active.com article said it usually heals on its own—as defined as “neck muscles return to full strength”—within a few weeks.

In my case, my neck felt 80% recovered a week after finishing the race. A 90-minute, light-pressure massage with healing essential oils by my favorite massage therapist a few days after the race seemed to help dramatically with neck mobility and reduction in pain.

I think my neck was close to 100% normal after 10-14 days, but it is hard to say for sure especially since I have not ridden a bicycle since finishing the race in Yorktown five weeks ago.

[November 2, 2015] I went for my first bike ride since finishing the Trans Am Bike Race 125 days earlier. After Mile 1 of the ride—in which I was riding in the aerobars—my neck was already hurting. By the end of the 10-mile ride, my neck was very sore and remained that way for the rest of the night. Needless to say this was very discouraging.

[Early 2016] I tried again. After a few more short rides, I was no longer noticing any soreness. Maybe it took my body a little while to get reacquainted with bicycling since I had not done so for so many months, even though prior to TABR I had ridden in very aggressive cycling positions for well over two decades without neck pain.

[May 2016] I would say the neck has no problems—although I have yet to do a ride over 35 miles. Will update this page again once I do my annual double century ride, maybe this summer.

[August 2017] I have ridden three double centuries this year. I had no neck pain during them at all despite no change in bike or bike position since the 2015 Trans Am Bike Race, or getting preventative massages. I can pretty confidently say I don’t think I’m at risk of Shermer’s Neck again unless I decide to bike some crazy distance well over 200 miles. 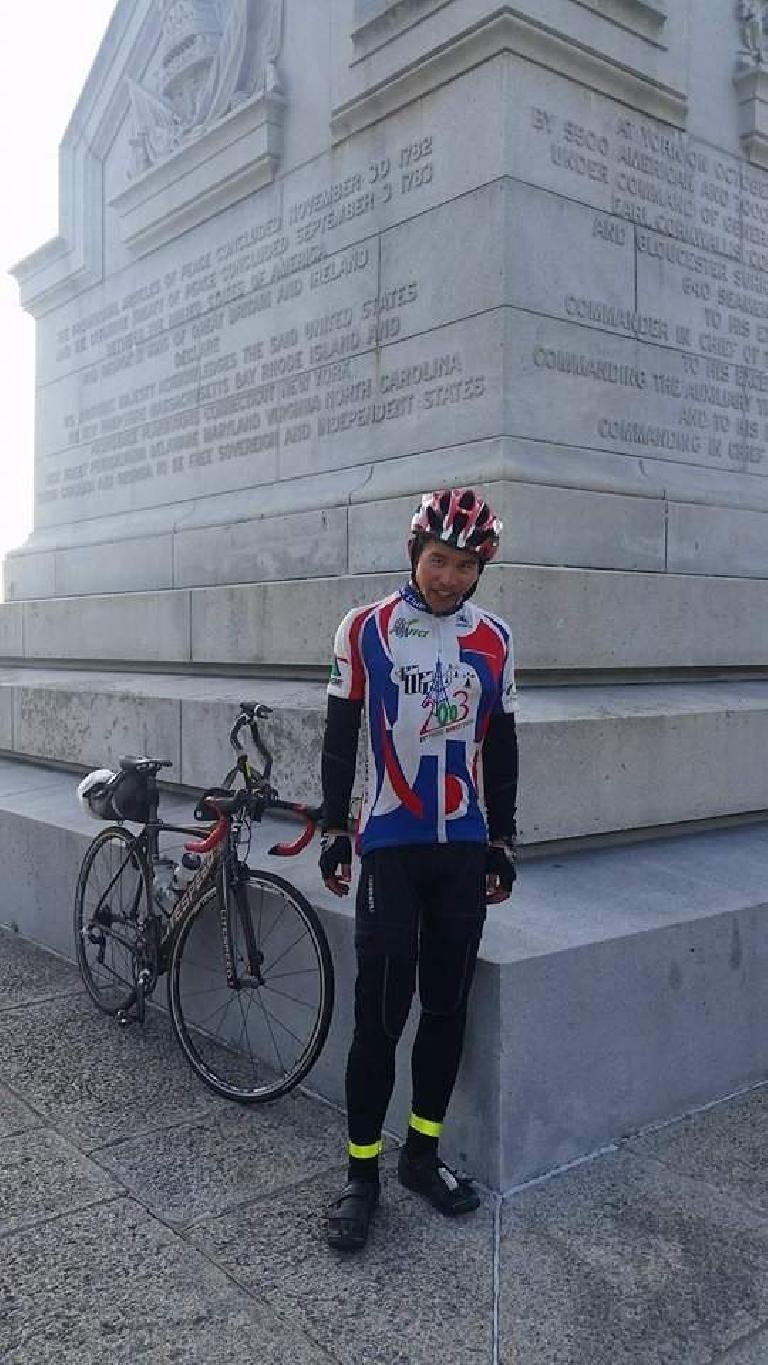