“Real sports car enthusiasts,” the first new Mini Cooper convertible advertisements seemed to imply, “have their tops down regardless of how much it is raining or how cold it is outside.”

Indeed, this seemed to be the attitude of the vintage British sports car owners on the Scions of Lucas email list I had subscribed to a dozen years ago, back in college. It is a philosophy I had adopted not only for my MGB but for the BMW Z3 and Alfa Romeo Spider I had subsequently as well. It helps that here in Fort Collins has 300 days of sunshine and hardly receives any rain, especially in winter.

So this explains why for the first 50 days in 2006, the Alfa’s top remained perpetually in the “down” position. That is, until the first major CO snowstorm of 2006. It was 0 degrees Fahrenheit in the garage, and I conceded it was time to put the top up.

As I begrudgingly did so, I heard a sickening snapping sound. I looked behind me and was not amused. Crap! The rear plastic window had completely split along its width two inches from the top of it!

Apparently, it was so cold in the garage that the normally pliable PVC plastic became so hard and brittle that the mere act of flexing it when putting the top up caused it to break. (Supposedly, this happens more frequently with older tops since the plasticizers leach out of the PVC over time.)

I then threw up my hands, resigned to the fact that “shit happens,” and threw some clear packing tape on the split. “Good enough,” I thought, at least until the same scenario repeated itself ten months later (a few days ago) when I once again attempted to put the top up on a rather cold-but-starry night.

It was time to finally replace that rear window.

Unfortunately, unlike on my former Z3, the rear window was sewn in instead of held in by a zipper. This meant I needed to replace the whole top or have a new rear window sewn in.

I then called a local upholstery shop, Jerry’s Upholstery in Fort Collins, about sewing in a new rear window if I were to remove the top from the car myself and bring it in. “It’ll be about $85,” said Todd, the convertible top specialist on the other side of the phone. He even remarked that he might be able to sew one in on the same day I brought in the top. Perfect.

All I needed to do, then, was remove the whole top from the car and separate the fabric from the top frame and header rail. (Todd would not have been able to get the fabric within the sewing machine if I did not do this, he told me.) This turned out to be pretty straightforward, though time-intensive (about 3 hours).

See the photos below that outline the procedure. Essentially, it entailed undoing a couple dozen nuts securing the top’s canvas to the car body, unscrewing a few bolts attaching the top’s frame to the car, and separating the fabric that was glued and riveted to the frame and header rail.

Then I brought in the fabric to the shop, where Todd snipped out the old plastic, cut a new window to size, and sewed in the new plastic to the inside of the convertible top. He did complete this on the same day and did a beautiful job. (I highly recommend Jerry’s Upholstery to anyone in the Fort Collins area now.)

Installation was the reverse of removal. This required the use of a rivet gun, something I once had but apparently lost between the move from Fremont, CA to Fort Collins last year. (No worries; I was able to obtain another one from Harbor Freight for just $6!)

Some lessons to be learned from this ordeal: 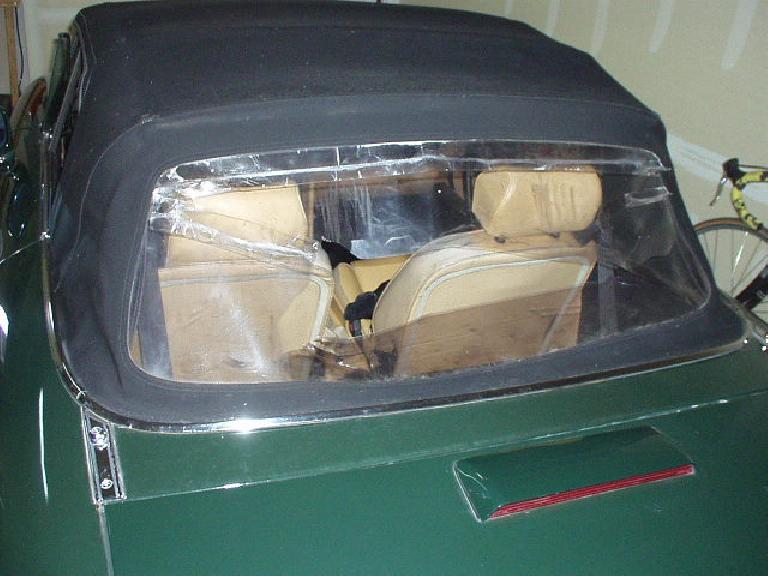 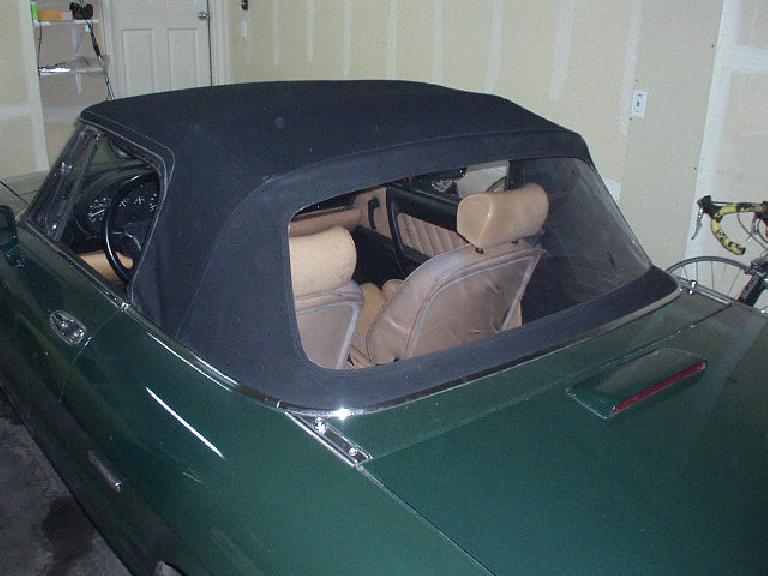 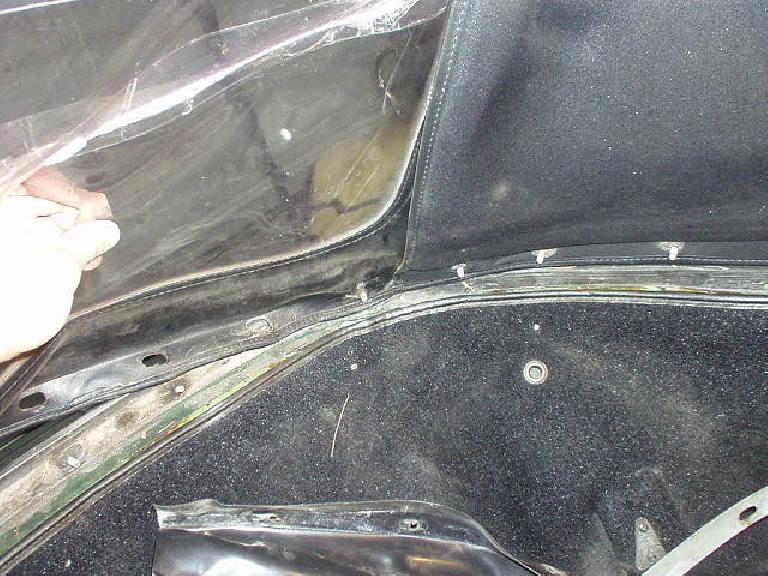 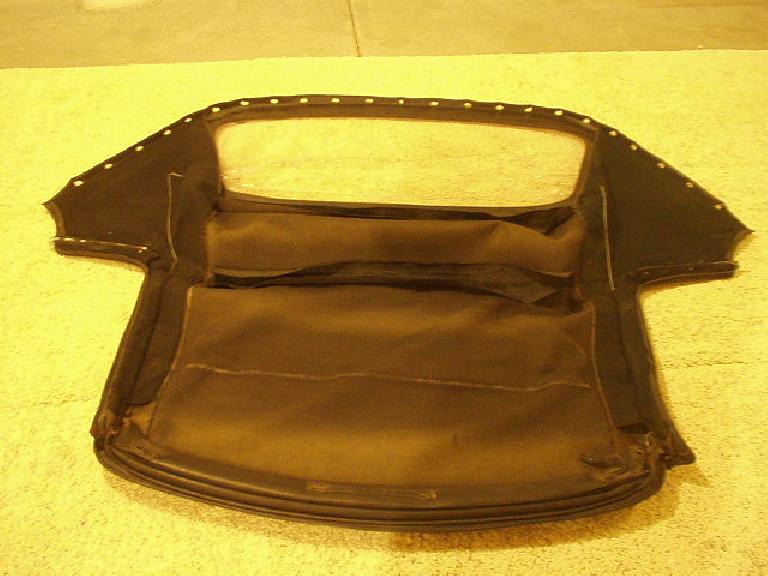 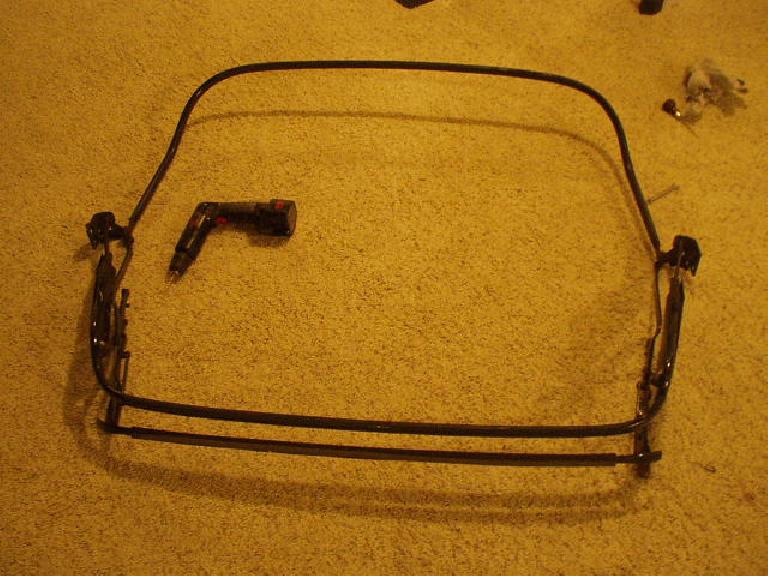 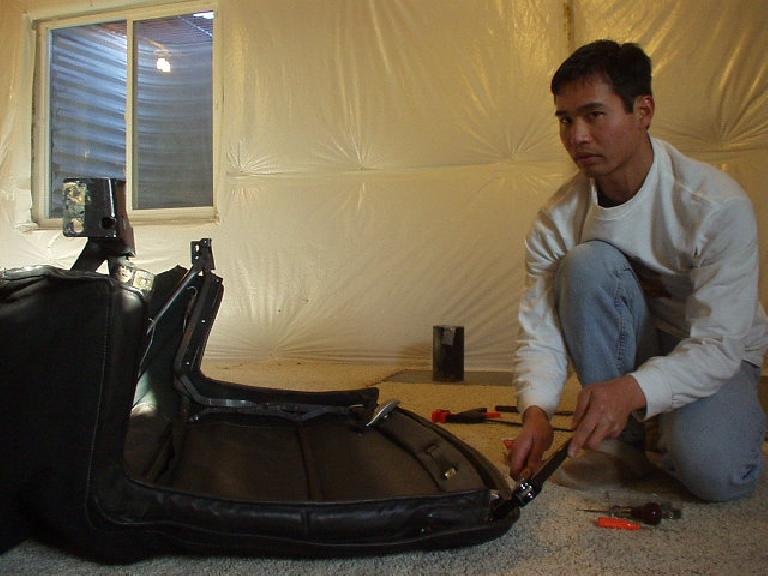