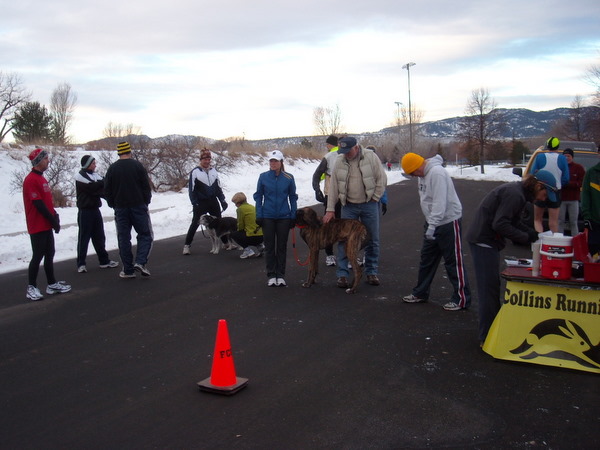 I have to admit that I initially thought Kenny’s plan for the Tortoise & Hare races was brilliant. A few months ago he told me how he had been “sitting on his butt” all summer so that he would be slower for the initial T&H races, yielding slacker predicted times and a higher probability of racking up bigger points in future races. But today in the Rolland Moore four-kilometer race, it seemed like someone or something was trying to foil his plan.

“Please note on your blog,” he told me, “that [Kenny’s wife] Amy was faster in the last race, and yet she’s still starting before me. Totally unfair!”

Kenny stated this loudly enough so that Nick (the race director who also happens to be Kenny and Amy’s neighbor) would hear. But Nick explained that the results from that race were not yet entered into the computer that predicted participants’ finishing times, and thus did not play any role in what his start time was determined to be today. I have to agree with Kenny, then: he was robbed!

Not a person to mope about this obvious injustice, Kenny ran hard and ultimately finished as the “male hare” or dude with the fastest time. Where he finished in the standings and how many resultant points he collected, I’m unsure, but he did not finish in the top five. Sorry, Kenny. Amy was the “female hare.”

I was a little slower than Kenny, finishing in 16:07 for the four kilometers (or 6:29/mile pace) and only catching one person who started before me, meaning that I finished third-to-the-last despite having the second fastest time (I started last with Alex). But I was pretty happy with that effort considering the ice slicks on the course and breath-freezing air that was disagreeable with my lungs. In contrast, my height-of-winter races of the past have been far more disastrous. Take the Lee Martinez Park 10k from December 2006 where I averaged a sluggish 7:24/mile, for example.

After the race all participants were treated to a free breakfast at Gib’s Bagels, courtesy of the Fort Collins Running Club which puts on the T&H series. The T&H races in this series are free for FCRC members due to the club’s recession-defying surplus in its treasury, so the club was essentially paying us to come out today and race.

Hmmm, perhaps Kenny was not robbed after all.

Just a quick point of clarification. The data from the Dec race was not entered into the prediction database because of the ridiculous running conditions (six to eight inches of fresh pow-pow). I thought about entering the finish times for what ending up being a 4k (cut from 8k) to adjust for the conditions, but decided instead to just leave the times out completely. Kenny needs to get out and train a little harder ;-)

And, yeah, the T&H is without doubt the best running deal in town. For $20 in membership dues you get seven free races and seven free breakfasts, at least $100 value, in addition to other benefits. ↩ Reply