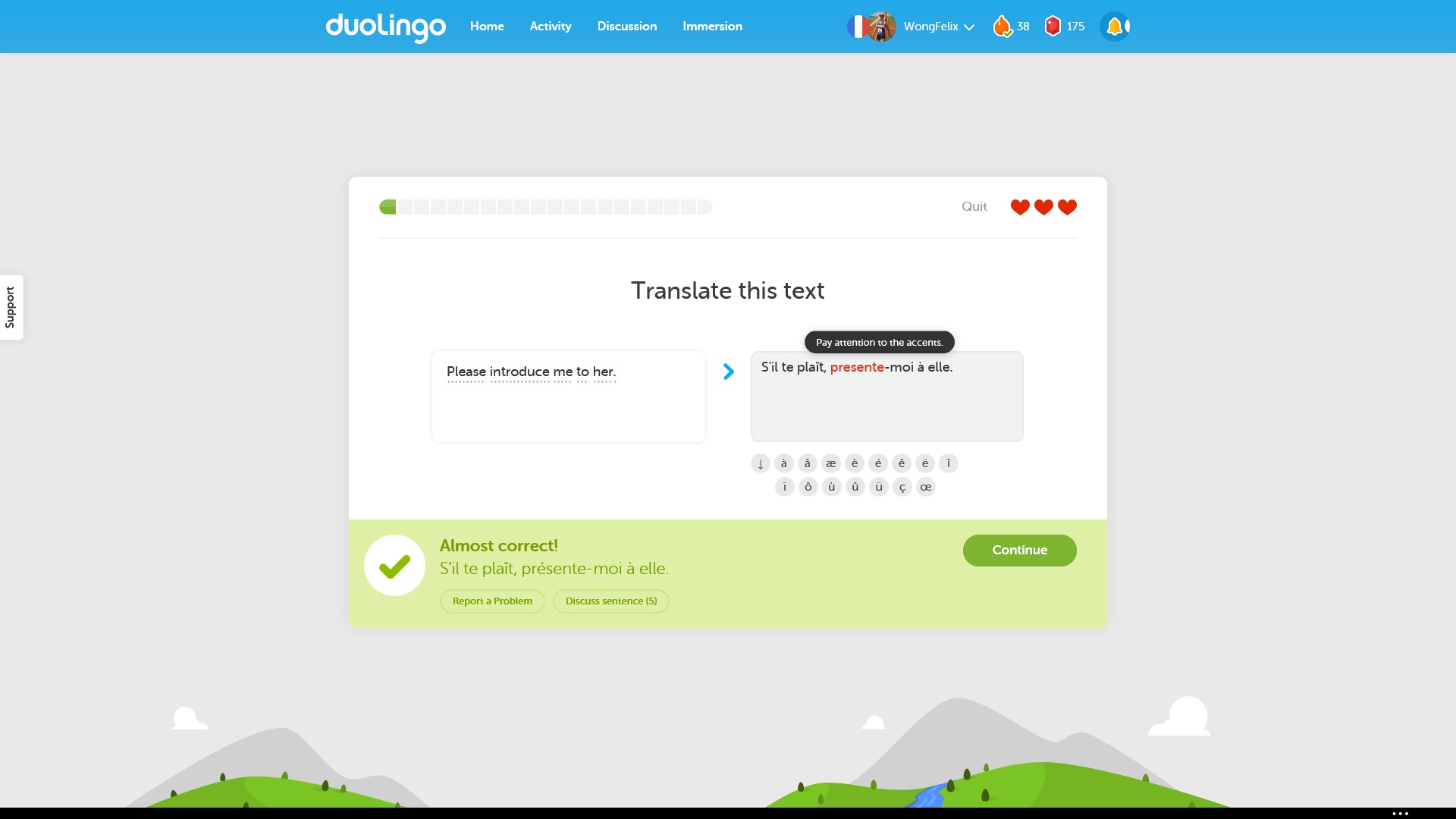 I have to admit that when my friend Susie first told me about Duolingo, I was skeptical. I have tried numerous methods to learn a foreign language—for example, high school classes, continuing education courses, two-week study abroad schools, Pimsleur, Michel Thomas, Rocket Languages, Living Languages, Destinos, and French in Action—and it seemed to me I didn’t need yet another one.

But Susie sent me a link to Duolingo along with a TED Talk explaining how it was created, so I took a look. I’m glad I did. I can honestly say now that Duolingo has changed my life.

First off, the TED Talk (below). I could summarize it in a sentence or two here, but it would be better if you watch it. Considering that it’s 17 minutes long and I am known to read Wikipedia articles for books and films instead of reading or viewing the original materials, consider this a big endorsement.

By watching the TED Talk, you will learn a bit not only about Duolingo, but also those “annoying” CAPTCHAs and re-CAPTCHAs you have surely encountered on the bottom of online forms. The presentation not only is amusing and entertaining, but wholly inspiring. Luis von Ahn, a professor at Carnegie Mellon University in Pittsburgh, is a bona fide genius.

Now more about Duolingo. I do it via the website, but there are also free iOS and Android apps for it. (In fact, Duolingo was the 2013 iPhone App of the Year.) This is why I believe it is super effective:

Furthermore, Duolingo is 100% free (no ads) and helps translate the web (e.g., Wikipedia articles from one language to another). This “second purpose” is why Duolingo was conceived in the first place—as explained by the TED Talk above.

One downside of Duolingo is that once in a while (say, one out of every fifty answers) seem a little odd. For example, the correct answer for classique et efficace in French translated to English was given as “classical and efficacious,” although hardly any English-speaking person would say “efficacious.” (Although I think “classic and effective” might also be accepted.)

Also, once in a while the audio is poor or unclear. Most of the time, however, I find Spanish to be extremely clear and French (which, by nature, is harder to understand due to so many unspoken letters and run-on syllables) decent. The Duolingo community seems to agree, however, that Italian on Duolingo is spoken pretty poorly.

I’ve been doing both Spanish and French and have already completed the Spanish tree! I even took the 20-minute certificate test and achieved a score of 5/5.0:

Duolingo also said that I can now read ~96% of all Spanish articles, so I suppose this puts me at the “advanced” level for Spanish. However, as evidenced by my weekly Spanish Conversation group, there is still plenty of vocabulary I could stand to learn. I will keep on doing Duolingo exercises for practice and maybe do some of the activities in the Immersion section (which entail translating Wikipedia entries), but am now focusing more on finishing the French skills tree.

For French, Duolingo also says I should be able to read 96% of all French articles, which is something I achieved after reaching Level 10! However, the French skills tree is much longer than the Spanish one, and considering how I frequently I fail some of the French lessons, I still have a ways to go.

But I would say that with Duolingo, I have already made more progress in six weeks than I had in several years with the other methods, and am speaking foreign languages with much greater confidence than ever before. All for free. And this is how Duolingo has changed my life.