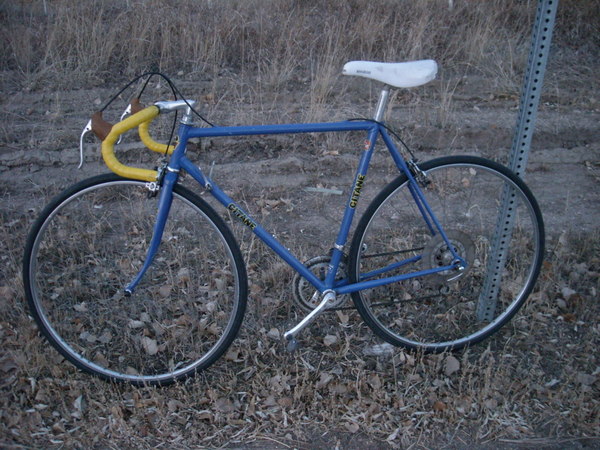 It’s been several years since a new machine on wheels had been added to the Garage Majal 2, but here it is: a 1984 Gitane Criterium. Yes, a bicycle even older than my ’92 Cannondale 3.0. How did this come about, you might ask.

Well, I’ve developed an interest in vintage bicycles. You can blame it on the Beautiful Bikes thread on the RoadBikeReview.com forums and the departure of my MG, which left me without any restore-and-adore activities. And while I need a big-scale restoration project like a classic car like I need a bullet through my leg, I figured an old bicycle was both manageable from a time perspective and easy enough on the wallet.

So then there was the question of which bicycle. Most people would go for Italian steel, but being something of an afficionado of all things French, I wanted something that parle français. And what French bicycle manufacturer has had a more glorious history than Gitane? It has equipped more Tour de France winners with bicycles than any other company (including Trek and Pinarello), including Bernard Hinault, Laurent Fignon and Greg LeMond—all riders who raced while I was a kid.

Now, finding Gitanes isn’t exactly easy, and I even tinkered around with the idea of creating a faux-replica of the bike LeMond won the 1983 World Championships on using a neglected lugged steel frame, Gitane blue paint and Gitane decals.

But then, in early December, I saw a 1984 Gitane Criterium in my size in almost completely original condition on eBay. No one bid on it except me so I got it for a reasonable, tidy sum. By mid-December it was on my doorstep, courtesy of FedEx.

I managed to get only one short ride in before my Guatemala trip, but it rode great! The friction shifters work much better than I anticipated; the drivetrain is silky smooth; and I got a feel for the “steel is real” ride quality that so many people rave about. It does seem to dampen out road chatter more than my Cannondale 3.0, although I haven’t decided if I have a preference yet for the Cannondale’s enhanced road feel or the Gitane’s “classic” lively-yet-smooth quality.

The bike is even fairly light for its day: 21.0 pounds without pedals. That is about how much my Cannondale weighed when I bought it new in 1993, even though the ‘dale’s frame and fork is significantly lighter.

The Gitane’s biggest deficiency is its braking power. The Wienmann brake levers and calipers have much less compared to today’s components. They do the job, but the brake levers do require gorilla grip strength to squeeze from hoods.

The bike actually looks pretty good right now—especially for a 27-year-old machine—but I will be restoring it over time. It won’t be just a beauty queen, however—I actually have some big plans for it this year ride-wise. More on this later in the next year.

[Update October 2011: The Gitane and I are now age-group course record holders of the Furnace Creek 508, Classic Bike Division!]

As per tradition, the Gitane is a “she” and warrants a name. Right now her temporary name is Ginny. We’ll see if that sticks.

It appears that 26 years after the bicycle was manufactured, I acquired her in all-original except for the handlebar tape, tires, and possibly the chain.

*from literature (unconfirmed due to lack of markings)

Hello, I just won a Gitane Criterium on Ebay. Liked your post .Have you stayed with the vintage brakes? I live in the mtns here in WNC and it might be fatal on the descents with the local drivers. Looking forward to getting it on the road.Thanks,safe riding!Ken in WNC ↩Reply

I have a Gitane Criterium I bought in 1984 in my basement. When I looked it up on Google I see you have one too. That is so funny since I just met you in Astoria at the TransAm. How is the restoration on yours coming? ↩Reply

Hi Olaf. That is so funny you have a 1984 Gitane Criterium too and was doing a search for it! Unfortunately I have done very little work on mine and have not even ridden it in a couple years now. I still intend to restore it one day. Would love to see photos of yours!

Thanks, too, for the photos you took at the Astoria Column the day before the start of the Trans Am Bike Race! ↩Reply

Pretty stoked and have commenced restoration. Lotsa work but satisfying.

Weighing up the touching up of the frame vs respray.

Has the maillard hubs. Spokes seem non stainless- very rusted. May require a re lace

with upgrade of spokes.

Hi Mike, thanks for stopping by my blog and for your comment. It?s nice to hear from a fellow Gitane owner.

I still have yet to restore my Gitane Criterium! I really hope to do so later this year. Fortunately most of the paint is pretty good on mine; I just need to touch it up and replace the decals. I have replacement decals already, but I?m not sure how to get a perfect color match for touch up paint. Any ideas?

The other day, I encountered a pink Gitane outside my favorite coffee shop. Nice to see them around. ↩Reply

I have managed to sandblast and powdercoat the frame- "french blue".

Got original reproduction stickers from Greg Softley from Coffs Harbour.

The simplex derailleurs are a bitch to configure and adjust and fit. Ended up buying NOS from Austria for a reasonable price. Retained old components however.

I ended up replacing the Mailard wheels with period correct and similar Gipiemme sprints.

Am currently trying to source a white Turbo saddle- they were available new a few months ago on online stockists but now not.....

The bike is all but fully restored and pristine.

My first honest attempt at resto.

Have 3 other projects on the go including an Aussie Geoff Scott circa 1985, An Unknown Italian bike with Oria ML 34 tubing with full Dura Ace componentry- another curbside cleanup, as well as a recently acquired Colnago Master, first Generation which has hung on a wall since 1986- all original- whoa.

Also have managed to acquire an Apollo 4 circa 1985- also garaged for past 30 years and in all original and original condition- will sell this to fund above projects LOL.

That is great, Mike! Fantastic you are done powder-coating the frame and have procured stickers and components now. Would love to see before and after photos when you are done.

Good luck on all your other interesting projects as well! ↩Reply